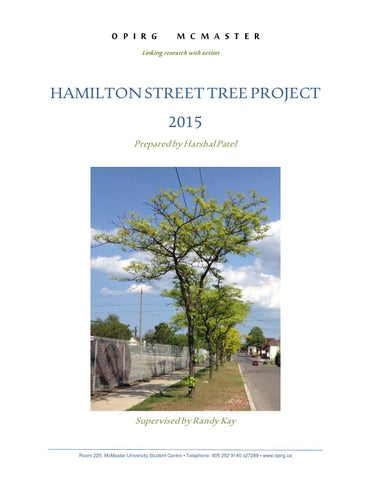 The Street Tree Project is a community outreach campaign started by OPIRG (Ontario Public Interest Research Group) McMaster and is based off of the pre-existing Street Tree Program initiative by the City of Hamilton.

The Street Tree Program was established in 2004 and aims to keep Hamilton green and clean by increasing the existing urban canopy. To achieve this, the program offers free trees to be planted anywhere on the city-owned portion (road allowance) of any property. Currently, the City of Hamilton maintains an excess of 300,000 street trees within the road allowance across Hamilton1. Although the program has been running for longer than a decade and has gained popularity in some regions of Hamilton, awareness in other regions of the City is still lacking. The Street Tree Project attempts to actively recruit neighbourhoods with identified poor air quality in addition to a lack of urban canopy to utilize the Street Tree Program via door-to-door canvassing, attending events, and by maintaining a strong social media presence. The project initially began with the realization of a few key elements: 1. Mobile air monitoring showing some neighbourhoods had air pollution issues measurably worse than others2 2. There is some evidence that less-well-to-do areas have less urban forest canopy than financially more-wealthy neighbourhoods3,4 3. Trees can improve air quality5 4. The City of Hamilton has a free Street Tree Program

Gibson Neighbourhood This yearâ&amp;#x20AC;&amp;#x2122;s targeted area is the Gibson neighbourhood, stretching from between Wentworth Street North to Sherman Avenue North and Main Street East to the train tracks just North of Barton Street East (Figure 1). This entire neighbourhood is in Hamiltonâ&amp;#x20AC;&amp;#x2122;s municipal Ward 3. As the Street Tree Project had already targeted residential areas with the worst air quality in previous years (Keith and Crown Point), The Gibson neighbourhood was chosen for 2015 by examining multiple factors. Being roughly between the Keith and Crown Point neighbourhoods, the Gibson neighbourhood unsurprisingly shows elevated levels of PM2.5 and PM10. Quantitatively, residents at Wentworth North/Eva Rothwell Centre in Keith have an increased mortality rate of 6.9% due to air pollutants higher than the city-wide average (11.5%), while residents at McAnulty experience an increased mortality rate of 2.8% higher than the city-wide average6. Additionally, according to the Hamilton Neighbourhood Profile, 40% of Gibson residents are living in poverty compared to the 18% average across the City7. When taking into consideration

that there is also a large proportion of individuals in the Gibson area with activity limitations when compared to the City average (30% versus 21%, respectively), it seemed very beneficial if information about the street tree program was actively brought to the community, as street trees may not necessarily be a priority for most residents7. Despite these limitations, there is potential to reap great rewards from the Street Tree Program by allowing the trees to improve air quality, reduce emissions, absorb breathable particulate matter, and ultimately improve the health of the residents. Figure 1: Map of Gibson neighbourhood

With the Gibson and Landsdale Area (GALA) collectively being home to approximately 4900 residences, we expect the Gibson neighbourhood to hold roughly 2450 residences7. However, seeing as homeowners make up a minority of residents in the GALA, we expect the Gibson neighbourhood to be home to approximately 930 homeowners who can immediately make the decision to have a Street Tree being planted upon being informed.

Tree Requests This year, we had 25 tree requests collected directly by the Street Tree Project. Various tactics were used to inform residents about the Street Tree Program including: 1. Door-to-door canvassing 2. Attending community events 2

3. Media and social media presence A combination of all three methods was ideal to maximize effectiveness, as each medium may reach a different audience. Each method was successful in bringing in street tree requests.

Door-to-door canvassing The majority of the tree requests were collected via door-to-door canvassing. Throughout the month of June, there were 11 canvassing trips across the Gibson neighbourhood. In total, every home in the Gibson neighbourhood (approximately 930) had a representative from the Street Tree Project attempt to inform them of the program. Going door-to-door was extremely beneficial for those homeowners who had questions of the program, as they could be addressed on the spot. From canvassing, we found that although some homeowners were aware of the program, they were unaware of the wide variety the City offers to be planted. A colourful list of available trees greatly aided homeowners’ decisions to request trees, especially because some of the trees shown on the list were in full bloom. Other homeowners who knew about the program seemed to be misinformed – they originally thought that they had no choice in what kind of tree or where the tree was planted, and so were reluctant to take advantage of the program. After being correctly informed of the Street Tree Program, some of the homeowners who were previously reluctant placed a request of their own.

Community Events The Street Tree Project attended the Gibson and Landsdale Area monthly planning meeting to become more familiar with the Gibson neighbourhood and the ‘happenings’ within it. As a result, Brenda Duke offered to put the Street Tree Project tree request poster in the next issue of The Herald, the GALA newspaper. At the invitation of Ward Three Councillor Matthew Green, the Street Tree Project also attended a local community anti-gun rally to get further acquainted with Gibson residents. The Street Tree Project was also involved in the first ever 100in1 Day Hamilton initiative, with their own intervention at the local Powell Park. We set up a table at the park to inform residents who were going for a stroll about the program, and we were successful in receiving a few more requests at this event. Finally, the Street Tree Project was present at the first ever Community Trails Day held at McMaster University. The objective of this event was to raise awareness of the program at an event where the main focus is to improve conservation in Ontario. Many residents from all across Ontario were impressed with Hamilton’s Street Tree Project and expressed that they would love if their City had a similar program – some individuals even said that they would speak with their local representatives about starting a Street Tree Program for their city. Overall, we found that attending community events was a great way to reach a broader audience and was great for informing the general public, but the door-to-door canvassing method was more successful in securing tree requests.

Media and Online Presence The Street Tree Project received media attention with an advertisment in The Herald newspaper in the GALA neighbourhood, and Harshal Patel was interviewed for McMaster’s CFMU radio station in May. The main method to inform the public was via the Hamilton Street Tree Project blog (http://hamiltonstreettreeproject.blogspot.ca/) as well as with the linked Twitter account (@TREEs4sTREEts). Since its creation, the blog has been visited 7,229 times while the twitter has accrued 140 followers. Social media has been a crucial method of sharing information about the Street Tree Program since information can be easily shared between residents online. Although there is no official count of how many trees have been requested online via the Hamilton Forestry website or by phone directly through the City number, information has been shared online to catalyze interest in the community for this Program. Therefore, although we received 25 tree requests, we suspect that the number of requests as a result of the project is much higher due to requests given directly to the City of Hamilton. Social media was also crucial to reach individuals who wanted to help out with the project, such as Terry Mote. Terry reached out via email and offered to distribute posters for the Street Tree Project on her street to raise awareness and hopefully get more trees planted in her area.

Acknowledgements, Volunteers, and the Community This project has brought out volunteers from throughout the McMaster community. This is to accomplish two major objectives: 1. Provide opportunities to McMaster students to become more actively engaged in initiatives across Hamilton to better local communities. This goes hand-in-hand with “popping the McMaster bubble”, and the Forward with Integrity initiative from President Deane, both which encourage students to become involved in the city beyond McMaster University’s campus. 2. By bringing awareness of the project throughout different communities, the project may be adopted by volunteers in other neighbourhoods and be continued without the direct involvement of OPIRG. Over the course of the 2015 project, 6 volunteers contributed over 60 hours of total time canvassing and tabling at various events. As mentioned in the objectives, the advantage of having volunteers is that they have been able to explore the Hamilton area and be able to foster a personal relationship which may encourage them and their friends to get involved with various other local projects.

OPIRG values the support we have received from the City’s Street Tree Program, and especially Christopher Ide who personally made the success of this project a part of his job, and to his predecessor Bill Longley who was instrumental in the project’s first two years. We also thank Councilor Matthew Green for the support we have received from him and his ideas to expand this project in the future. He continues to be a dedicated and inspiring City Councilor for Ward 3.

Partnerships and Next Steps To continue making Hamilton a more sustainable city, a sustained effort of getting more trees planted in neighbourhoods is just one of many needed steps. To facilitate the expansion of this project city-wide, support from City Hall via individuals such as Councilor Matthew Green is crucial to continue publicizing this project. Furthermore, the mass recruitment of volunteers from all areas of the City is needed. For example, a local church from the east end neighbourhood has offered the time of their members to go door-to-door canvassing in their neighbourhood – if we can encourage enough groups across the entire City to go door-to-door canvassing like this, it would alleviate the need to search for specific neighbourhoods to focus on, while overlooking others. The OPIRG StreetTree Project has found hiring a summer student to advertise the program and organize door-to-door canvassing campaigns an effective method of advertisement and gathering tree requests. We look forward to continuing our partnerships with all those involved in the following summers.

Summary and conclusions from OPIRG McMaster's 3rd year promoting free street trees in targeted neighbourhoods in Hamilton Ontario, Canada. Investing in social and environmental justice with a long term commitment to bringing more trees where they are needed most in Hamilton, this door to door campaign will help bring value to areas lacking an urban canopy, benefiting air quality, health, property values and stronger communities. 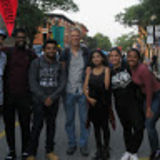