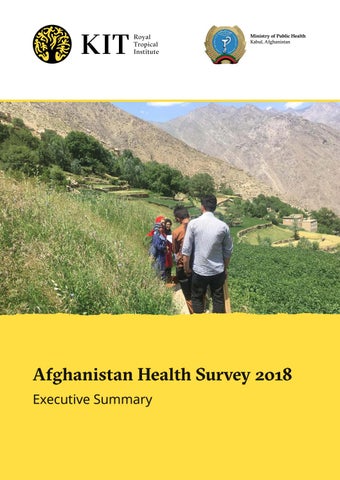 Introduction In 2018, KIT Royal Tropical Institute implemented the Afghanistan Health Survey (AHS) — a nationwide household survey undertaken by independent organisations since 2006. KIT implemented the survey as Third Party Evaluator for the System Enhancement for Health Action in Transition (SEHAT) programme. AHS 2018 provides vital data for policy making on the current state of health of the Afghan population. In doing so, the impact of existing health programmes — the basic and essential packages of health services (BPHS and EPHS) — can be tracked. While giving a general overview of the state of health in Afghanistan, particular emphasis is placed on infant and maternal health due to their prominence in the BPHS. Now that several health surveys have been conducted in Afghanistan, KIT can reflect on significant trends in health data gathered over fifteen years. The data is encouraging for the public-private model of EPHS and BPHS implementation, even more so in the face of compromised state stability and insecurity. However, the recent stalling of some trends advocates for the further strengthening of health services in Afghanistan.

THE FULL VERSION OF THE AHS 2018 REPORT IS AVAILABLE ONLINE AT WWW.KIT.NL/PROJECT/SEHAT

Contracting health service delivery As of 2003, Afghanistan established a novel nation-wide public-private model for health service delivery, gradually brought under a single umbrella, the SEHAT programme. NonGovernmental Organisations (NGOs) were contracted by the Ministry of Public Health (MoPH) to deliver a standard package of health services, defined by the MoPH. Participating NGOs were selected through competitive bidding to deliver services in a specific geographical area. The great majority of these NGOs were Afghan. Three of the 34 provinces operated an alternative model based on ‘within- government’ contracts to strengthen service delivery by MoPH staff.

Primary objectives of SEHAT were to expand the scope, quality, and coverage of health services provided to the population, particularly to the poor. Many resources have been devoted to independently monitor and evaluate its performance, including strengthening of the health management information system. With a view to working towards Millennium Development Goals 4 and 5 in the years 2000-2015, particular emphasis in the BPHS was placed on maternal, neonatal, and child health (MNCH), which continues today under Sustainable Development Goal 3. The SEHAT programme ended in 2018. The contracting scheme continues under Sehatmandi, from 2019 onwards.

Reflecting on fifteen years of contracting health services Afghanistan has made strong improvements in public health and health service coverage, with the help of external assistance and private partners. Since the start of health system restructuring approximately fifteen years ago in 2003 with the basic and essential package of health services (BPHS and EPHS), a large public-private model of health service delivery has been established (see box above on SEHAT). Changes in the health status of Afghanistan’s population has been systematically recorded through household surveys starting with the Multiple Indicator Cluster Survey (MICS) in 2003 through to the AHS of 2018. The trends for SEHAT core indicators — skilled birth attendance (SBA), antenatal care coverage (ANC), contraceptive prevalence rate (CPR) and child immunizations — as well as a reflection on equity, are given below. Great strides have been made, although progress is not linear in all fields and challenges remain. This underlines the need for continuous effort in strengthening the health system and outreach to the population of Afghanistan.

ANC and SBA coverage have both progressed over the last fifteen years, standing at 65.2% and 58.8% respectively in 2018. Progress for SBA and ANC is particularly visible among rural women increasing respectively from 4% to 51.0%, and 8% to 59.6% during the 2003 – 2018 period. This progress, however, has stalled or slightly reversed for ANC and SBA in recent years particularly among women from the lowest wealth quintiles. After an increase in early years, CPR has not shown much change since 2006 with rates fluctuating between 10% and 20% nationally over the fifteen years’ period. Zooming in to the lowest wealth quintile shows that the CPR level has dropped from its highest level of 14.2% in 2010/11 and is currently only 8.8%.

Equity: The historical equity data for both

maternal health and child immunization shows a remarkably stable pattern. General upward performance between 2003 and 2018 has not changed the disparity experienced by the lowest wealth quintiles.

Three-quarters of people who experienced health complaints sought treatment outside the home. A clear trend can be observed in treatment-seeking behaviour between wealth quintiles, from 64.8% treatment seeking by the lowest quintiles to 80.5% by the highest. Private providers were visited nearly two-thirds of the time. MoPH clinics were the point of care in 21.2% of cases and MoPH hospitals in 9.4%. MoPH clinics are visited more frequently by rural residents (25.9%) versus urban (9.9%) and by people in the lowest quintile (35.6%).

ACCESS TO HEALTH SERVICES Percentage of respondents with travel time less than 2 hours to the facility for illness in past 2 weeks, by wealth w % 70 60 50 40 30 20 10 0 Lowest MOPH Clinic

3.2% reported being hospitalised in the prece­ ding twelve months. In children under the age of five this was only slightly higher (4%). Two-thirds stayed in an MoPH hospital, 28.3% in a private clinic or hospital and 3.4% in a health facility abroad. majority of respondents (57%) could reach the A facility within thirty minutes and cumulatively over 90% could reach a facility within two hours. Accessibility is more limited for poorer and rural respondents compared to richer and urban respondents.

far the largest expenditure for both By outpatient and inpatient care is costs for drugs and medical supplies, followed by costs incurred for transportation to the health facility.

MEAN EXPENDITURES IN AFGHANI, FOR TREATING ILLNESS OR DISABILITY IN PAST TWO WEEKS (OPD)

19,4 IMMUNIZATION AND VITAMIN A

Half of all children aged 12-23 months are fully immunized and 67% of children aged 6-59 months received vitamin A in the past six months.

The majority (65.2%) of women had at least one (ANC visit during their pregnancy, but only 20.9% had the recommended four visits or more. About half of the women (52.8%) who attended ANC started timely in the first trimester. Half of the ANC visits take place at MOPH facilities, either a clinic or hospital. Around two fifths of women (41.2%) deliver at home. This likelihood is increased for women in rural areas, with lower educational level and lower wealth status. Their births are mostly attended by a Traditional Birth Attendant (TBA), a relative, neighbour or friend. Community health workers hardly play any role in repro­ ductive health in Afghanistan, neither for antenatal nor delivery care.

Nationwide, 58.8% of women deliver with skilled birth attendance, mostly being a midwife. The majority of institutional deliveries take place at MOPH facilities, but private facilities also cover a substantial amount of all deliveries, especially in urban areas and among women with higher education or wealth quintile. 18.9% of reproductive-age women use any method of contraception. A modern contra­ ceptive prevalence rate of 17.4% indicates that the far majority of these methods can be considered as ‘modern’, including female sterilisation, intrauterine device, contraceptive pill, contraceptive injection, and condom. Nearly a third of the women (32.0%) could not mention any of the contraceptive methods.

Demographic analyses Maternal mortality The reported maternal mortality ratio among women between 15 and 49 years of age is 153/100’000 live births. However, analyses suggest that a sizeable number of deaths may have been missed in questioning respondents. Given that maternal mortality remains a relatively rare event, the under-reporting of deaths can have a very strong impact on the final estimate. Further analysis may contribute to improved methodology and tools capable of reliably measuring maternal mortality in the context of Afghanistan.

the five-year period before the AHS 2018 In survey the estimate for under-five mortality rate was fifty deaths per 1,000 live births, meaning that one of every 20 children died before reaching their fifth birthday;

There has been a decline in the under-five mortality rate over the past fifteen years. The estimated rate was 69 deaths per 1,000 live births in the 10-14 years prior to the survey, falling to fifty deaths per 1,000 live births in the five years preceding the survey; clear trend can be observed, with higher rates A in the rural compared with urban areas.

The total fertility rate (TFR) is 5.1 children per woman. Childbearing peaks at age 25-29 and drops sharply thereafter. A clear pattern can be observed with higher fertility levels in rural areas and decreasing fertility with increasing levels of education.

THE FULL VERSION OF THE AHS 2018 REPORT IS AVAILABLE ONLINE AT WWW.KIT.NL/PROJECT/SEHAT

Data in the full report include results on the population and household characteristics, self-reported illness, community perception, children’s nutrition status, the verbal autopsy analysis, as well as further elucidation of the topics above.

Survey details Data collection took place between March 2018 and August 2018. Field teams consisted of males and females, recruited from each of Afghanistan’s 34 provinces. All staff received extensive classroom and field-based training prior to going into the field. The actual coverage of the survey consisted of 19,684 households, from 912 clusters in 34 provinces. In Zabul, Nooristan, and Helmand, less than two-third of selected clusters could be surveyed. Hence, data from these provinces should be interpreted with some caution.

We are very grateful to all survey respondents for their time and willingness to collaborate. We would also like to express our gratitude to the Ministry of Public Health of Afghanistan, the AHS 2018 Steering Committee, the National Statistics and Information Authority (NSIA), and UNICEF.

For more information about KITâ&amp;#x20AC;&amp;#x2122;s activities in