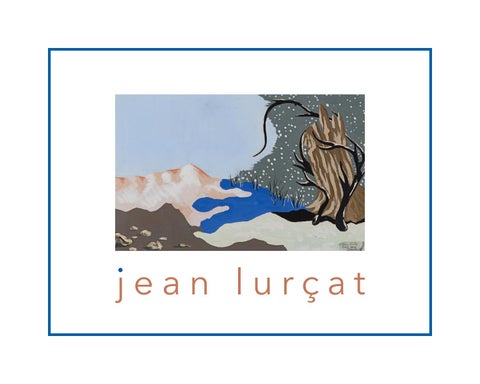 the intensely creative interwar years. He lived and worked in Villa Seurat in the 14th arrondissement of Paris in a Bauhaus-style building designed by his brother André Lurçat. Jean Lurçat moved in the Cubist circles of the time and purchased several works from the Kahnweiler sales. He published poetry in Les Feuilles de Mai, which he co-founded,

and he traveled extensively throughout Africa and the Middle East. His work was acquired by Barnes, and exhibited in New York alongside those of Matisse, Derain, and Braque. And yet, we know and celebrate Lurçat mostly through his tapestries, a medium to which he dedicated most of his efforts in his later years. In viewing the works in this exhibition, the themes and colors bewitch; the exotic settings and vibrant tones beckon. The works of Jean Lurçat are unique, the result of a free spirit surrounded by the creative forces around him and yet singularly distinct, combining elements of Surrealism, Cubism, Modernism, and Classicism. Rosenberg & Co. welcomes you to this unusual and intriguing voyage of discovery of Jean Lurçat’s triumphant work. M ARIANNE R OSENBERG

twentieth century, unconfined by a specific school or doctrine. After the Second World War, the name Jean Lurçat dominates the history of twentieth-century tapestry — once a prized craft of Northern Europe, the tapestry industry had lost its distinctive characteristics and with it, its creative inspiration. With an immense oeuvre of woven works

— the largest left by any tapestry designer — it is widely acknowledged that Lurçat rescued the neglected discipline of weaving tapestries. Lurçat’s success as a tapestry designer, however, may have come to overshadow the painted works of his earlier career, despite irrefutable originality of their style. Gérard Denizeau, editor of the artist’s catalogue raisonné, wrote: “To Lurçat, tapestry and painting were two planets whose orbits might intersect but never merge. He attached great importance to the nature of his materials, choosing watercolor to express the dreamlike (1917 to 1920), oil for his ‘major’ paintings (1925 to 1931), and gouache for the work of his twilight painting years.” Rosenberg & Co.’s solo exhibition and this accompanying catalogue offer a rare focus on Jean Lurçat’s works on paper and paintings, highlighting an often-overlooked facet of his oeuvre, especially in North America.

Lurçat grew up in a family appreciative of artistic expression. His father, a postman by trade, developed a local reputation painting the portraits of regional gentry. His mother, educated within a convent, studied music and art as a child. As such, every day before school, Lurçat would practice the piano with his mother and it was through her example that he first began to practice painting in watercolor. Originally sent to university in Nancy to study medicine, Lurçat began to neglect his studies in science in favor of the arts. He became absorbed into the artistic circle of Victor Prouvé — a painter, sculptor, and engraver belonging to the Art Nouveau École de Nancy. Prouvé encouraged Lurçat’s nascent talent and provided an environment in which the young artist felt emboldened to alter his professional course. Within two years, Lurçat would leave Nancy and Prouvé, and, along with his brother André Lurçat, a budding architect, move to Paris. Jean Lurçat wished to attend the Académie des Beaux-Arts, but the rudimentary development of his technical skills (despite his evident talent) closed those doors to him. Instead, he enrolled at the Académie Colarossi, which represented a more forward-thinking milieu of creative education. When Lurçat arrived in Paris in 1912, he entered a hotbed of creative activity. He became better acquainted with the city’s masters of Modern art: Braque, Matisse, and Picasso, in particular. The Fauvists inspired his development as a colorist. An affinity for the decorative particularly drew him to the work of Matisse. The Cubists’ dissection of planes also intrigued him. In 1913, Lurçat traveled to Munich where he saw an exhibition of work by the Blaue Reiter group, founded by Kandinsky. The melancholy imbued in the bare landscapes and haunting figures resonated with the young artist. Lurçat traveled extensively in Italy, where he was exposed to and became infatuated with the work of Giotto and Ciambue. His first sojourn in Italy was cut short by the outbreak of war in August 1914, causing him to volunteer for the infantry. Soon after, the aspiring artist contracted typhoid and was released on an extended sick leave. Lurçat went to his parents’ home to convalesce and quickly returned to his artistic practice. He drew prolifically during this time, and continued to dabble in different media, completing his first set of lithographs and first tapestry cartoons (which his mother later translated into wool in 1917).

After the First World War, Lurçat’s style began to mature and he embarked on a period of great productivity (completing over 120 works between 1920 and 1923). By 1921, Lurçat had settled into his predominant use of oils and a penchant for depicting still life. Early works such as Nature morte au coquillage (1923) show the use of layered materials that convey the artist’s interest in texture and tactility beyond traditional oil painting. The objects “brim over the table, as if to escape the canvas, engulfing the underlying motifs in its displacement” [Denizeau, p. XI]. By this time, the lessons of the Cubists had been widely accepted. The fear shared by many young artists — that of being consumed by the monumentality of the Cubist movement, if their aesthetics bore any similarities to it — began to subside. Lurçat used a mixture of turbulent colors and a proclivity for the decorative to divorce his style from the grip of any Cubist classification. Lurçat never embraced complete abstraction, believing that, “To deprive a work of its subject is to deprive a sentence of its verb: meaning is lost, leaving the work devoid of all poetic impact.” [Denizeau, p. VI]. Throughout his career, Lurçat was adamant about not associating with any particular school and it is difficult to situate precise sources of influences. He later insisted that his work did not belong within the Surrealist school. Yet, Lurçat held close friendships with many of the movement’s members — he himself born within a decade of Miró, Masson, Magritte, and Dalí. However, Lurçat asserted that his work was based on reason, as opposed to the principle of chance that resonated within the movement. Nevertheless, his work during these years included some of the “devastated, lugubrious and sinister landscapes, the dream-like nature of which fits in perfectly with the Surrealist aesthetic” [Hermel, 28]. For Lurçat, travel would continue to be a catalyst for artistic growth. In 1924, he traveled to Spain and North Africa. During this trip he began to embrace the then-popular themes of Orientalism. In Le Turc (1926), painted in the middle of the artist’s fascination with this “exotic” theme, a loose outline defines a male figure, whose basic features appear almost identically in several works across this series. The “composition is defined by the decorative” — focus is given to the details of the individual’s attire — the

textures and colors of the fabrics captivating the eye. Lurçat uses large blocks of color to demarcate body parts against the foreground and background, rendering the figure distinct but nonetheless flat, presented to the viewer in a frontal stasis. Lurçat very often composed his landscapes as backgrounds for his still life works. Like many artists of his generations, the residual emotions of the Great War lingered in Lurçat’s work. “Mountainous horizons, desert landscapes, threatening clouds, and fragmented walls,” characterized the artist’s paintings, echoing the state of “absurdity, the feeling of revolt, and the bitter renouncement” that hovered over Europe [AlbertBirot, 50]. These works, many dating from 1927 to 1928, are filled with Mediterranean iconography: the emptiness of the desert scenes contrast with symbols of fertility and fruitfulness depicted by apples, pomegranates, and figs. In works, such as Nature Morte (1927), the mountains illustrated by Lurçat convey a sense of spiritual awakening, harkening back to his admiration of Giotto. Lurçat was not alone in finding “the intellectualism of Cubism ill-suited to respond to the spiritual misery of man.” He felt strongly that artists could not turn their backs on the “anxieties of the time.” And even his most decorative paintings hold within them a reverberating sense of isolation that characterized the inter-war years but also called for renewed hope in the face of such a state. Lurçat transitioned from land to sea in the first years of the 1930s, creating multiple series based on oceanic themes, using the platform to illustrate the dichotomy of death and life he saw in the world around him — ship-wrecked vessels cautioning death (as seen in Voiles dans la Tempete, 1931), while wind-filled sails show signs of new life, (as seen in Les bateaux, 1931). Lurçat’s work tended to evoke a universe built, then abandoned, by man. Very few series focus on the individual figure — one such series was Le Turc (1926), another concentrated on groups of bathers. Les baigneuses (1933) demonstrates Lurçat’s great aptitude as a draftsman and offers a whimsical contrast to the harsh lines and garish colors of his shipwreck works. It was at this time, at the apparent height of his success, following international acclaim in Paris, London, New York, Philadelphia, and Berlin, that Lurçat stopped painting in oils and devoted the remainder of his

career, predominantly, to his work in tapestry. Tapestry provided Lurçat with the opportunity to intersect his passion for illustration with his love of text. For him, “All pure painters are poets and all pure poets are painters” [Hermel, 34]. As was not uncommon at the time, particularly within the Surrealist and Dadaist circles, cross-pollination between disciplines was highly encouraged and frequently practiced. He put Paul Éluard’s 1942 poem, “Liberté,” under the loom the following year. He coupled the poem’s text, an ode to freedom under German occupation, with imagery of two overlapping suns and a rooster presiding over the orbs. The use of the sun or the dawn on the horizon was commonly invoked at the time to symbolize new hope. The rooster appears frequently during and after the war, remaining a sign of national pride, a symbol of confident assurance. On February 16, 1964, Jean Lurçat was elected a member of the Académie des Beaux-Arts. This served as an official recognition of tapestry design within the Academy, a solidification of the renaissance of an art form long neglected and single-handedly resurrected by Lurçat. He would continue to work in other media, especially gouache, producing over 500 works on paper while also focusing on tapestries. In putting aside Lurçat’s legacy of tapestry design, we are reminded “how intensely important the internal necessity to create was to this artist” [Denizeau, p. VI]. His paintings and works on paper bear witness to the multiplicity of his inspiration and the strongly poetic nature of his oeuvre, across media — watercolor, oil and gouache — and through the recurring themes — his fascination with the Orient, the desolation of landscapes, and the evocative scenes of ocean and shipwrecks — that continue to beguile viewers today. Lurçat’s originality as a draftsman and painter squarely places him as a key figure of Modern art. Too often, his deep involvement in the applied arts — tapestry and ceramics — steals the focus. Rosenberg & Co.’s exhibition shifts and reframes the conversation, providing a much overdue spotlight on Lurçat’s painted and drawn artworks. K ADIE R OSS ROSENBERG & CO. 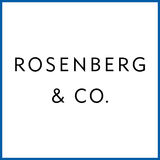