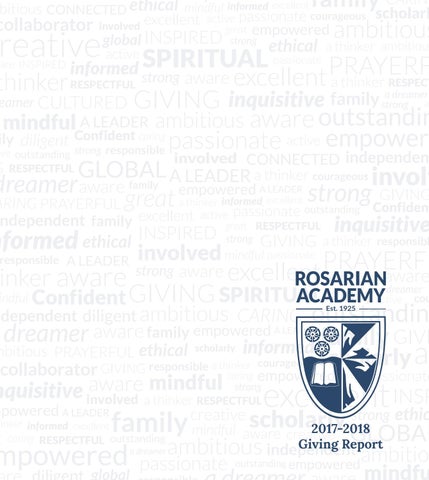 Giving Report July 1, 2017 - June 30, 2018 Mission & Philosphy Rosarian Academy, founded in 1925, is an independent, coeducational Catholic school sponsored by the Adrian Dominican Sisters. Its mission is to educate the whole person for life in a global community in the light of Gospel values.

We have made every effort to ensure the accuracy of the information in this report. Any omissions or errors do not diminish the high regard in which we hold all of our benefactors. If we have erred, please accept our sincere apologies and contact us so we may correct our records and apologize personally. Please contact the Advancement Department: 561-345-3109 or advancement@rosarian.org.

Our Catholic identity and mission continue to be at the forefront of all of our work—weaved into everything done in and out of the classroom each and every day. With the Adrian Dominican Sisters’ guidance and mentorship of Rosarian Academy, the Board of Directors and Administration, we propel our school into the future. This annual giving report is a declaration of the generosity of you, the Rosarian community. Through the financial support of parents, alumni parents, alumni, grandparents and friends of Rosarian, we are able to constantly improve our facilities and technology; retain highly trained and qualified faculty and staff; maintain small class sizes; offer an advanced, progressive and accelerated academic program; provide outstanding athletics and arts; increase co-curricular and extra-curricular activities. Each gift received is a testament to the value of a Rosarian education. We are forever grateful. Reflecting on the 2017-2018 academic year, Rosarian experienced growth in many areas. The school made significant investments in technology, including the installation of smart TV’s in all classrooms and document cameras. To further embrace the importance of science, technology, engineering, art and mathematics, we partnered with Carnegie Science Center as the first Carnegie STEM Excellence Pathway partner in Florida and conducted professional development workshops to strengthen our STEM curriculum. We advanced Rosarian Academy’s “Green School Initiative” for campus sustainability and developing students’ stewardship of the planet with the installation of three new garden beds and five filtered water stations and moving to china and silverware in the cafeteria to reduce paper and plastic consumption. The Lower School introduced new programs in Social Studies and reading, including a leveled reader library which greatly enhances reading instruction by focusing on individual progression. Rosarian’s health education curriculum was revamped to include a progression of developmentally-appropriate lessons and learning experiences that guide students to practice health-enhancing behaviors. The vertical implementation of a school-wide writing program, Empowering Writers, quickly improved connectivity through all of the divisions with consistent terminology that has propelled student understanding and achievement. We adopted the CTP 4 standardized test to establish independent school benchmarks and comparisons against the very best educational institutions in the country. We implemented a new evaluation system through ADP to provide greater transparency and feedback to support faculty and staff in their work and show our commitment of retaining the very best personnel. On-campus camera systems continued to be updated to ensure campus security. We kicked off the Oakley Debbs Health & Wellness Initiative to allow Rosarian to continue to take great strides with food allergy awareness, EpiPen Auto-Injectors, health training, and wellness education. Rosarian Academy fosters a culture of shared responsibility and financial viability. Fundraising covers the additional expenses necessary to operate our school, above and beyond the revenue brought in through tuition and alternate sources, such as aftercare, after school programs, facility rentals, summer programs, and the Rosarian Academy Charitable Trust. As a result, the 2017-2018 annual Rosarian Fund and Auction were both the most successful that they have ever been, generating a combined gross income of more than $780,000. Special thanks to all of our parent volunteers for their time and assistance in sharing the important message of The Rosarian Fund and Auction which close the gap between tuition revenue and the actual cost of educating students at Rosarian. It is with utmost appreciation that we thank you, once again, for supporting Rosarian Academy and investing in a foundation for life.

Expenses total does not reflect depreciation. 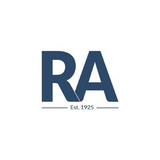 This 2017-2018 Giving Report is a declaration of the generosity of the Rosarian community. Through the financial support of parents, alumni...

This 2017-2018 Giving Report is a declaration of the generosity of the Rosarian community. Through the financial support of parents, alumni...