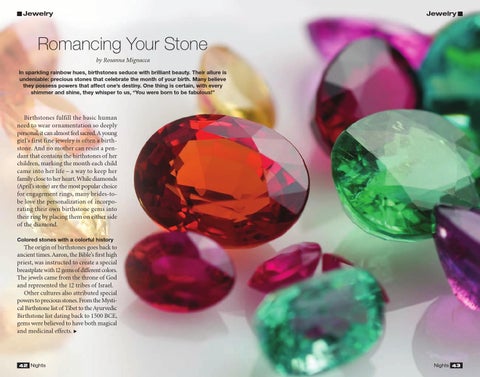 Romancing Your Stone by Rosanna Mignacca In sparkling rainbow hues, birthstones seduce with brilliant beauty. Their allure is undeniable: precious stones that celebrate the month of your birth. Many believe they possess powers that affect one’s destiny. One thing is certain, with every shimmer and shine, they whisper to us, “You were born to be fabulous!”

Birthstones fulfill the basic human need to wear ornamentation so deeply personal, it can almost feel sacred. A young girl’s first fine jewelry is often a birthstone. And no mother can resist a pendant that contains the birthstones of her children, marking the month each child came into her life – a way to keep her family close to her heart. While diamonds (April’s stone) are the most popular choice for engagement rings, many brides-tobe love the personalization of incorporating their own birthstone gems into their ring by placing them on either side of the diamond. Colored stones with a colorful history

The origin of birthstones goes back to ancient times. Aaron, the Bible’s first high priest, was instructed to create a special breastplate with 12 gems of different colors. The jewels came from the throne of God and represented the 12 tribes of Israel. Other cultures also attributed special powers to precious stones. From the Mystical Birthstone list of Tibet to the Ayurvedic Birthstone list dating back to 1500 BCE, gems were believed to have both magical and medicinal effects. E

In AD 40, historian Titus Flavius Josephus was the first to link the biblical gemstones to the 12 signs of the zodiac and the 12 months of the year. From then on, marvelous myths and lore have only added to the appeal of wearing a stunning natural stone ascribed to the birthdate of the wearer. In 15th century Poland, people would own all 12 birthstones, believing that wearing a gemstone during its corresponding month heightened its powers. Birthstones were thought to bring about healing and good fortune, as well as bestow joy, calm, peace, and creativity to their owners. Precious and popular

With all their colorful history, one thing is certain: people will always be captivated by the notion that their personality is deeply connected to their own personal gem. Some people find they are drawn to their stone at a young age, even before they know it is their birthstone. Others receive a gift of their birthstone, fall in love with it and spend a lifetime collecting other pieces. Many follow the custom of wearing stones during their corresponding months; perhaps that is why so many June brides choose to wear pearls, June’s birthstone! 44 Nights

It’s no secret that royals are fond of precious gems. They are icons of beauty, symbols of prestige and power. Gemstones command attention as they reflect every glimmer of light, expressing heavenly color and evoking a wide range of emotions, including mystery and passion. King Edward VIII abdicated the throne when he fell in love with Wallis Simpson, a divorced woman, who at the time was married to her second husband. He proposed with May’s birthstone, an emerald ring, on which he engraved, “We are ours now” – a declaration from a man who would be king, but gave it all away for the woman he loved.

Wallis and Edward, then Duke and Duchess of Windsor, were beacons of style and jewelry connoisseurs, commissioning exquisite pieces that have remained a testament to a love that burned more brightly than power and status. One such piece was the famed Cartier bib necklace that featured a combination of three birthstones. Its centerpiece was a heart-shaped amethyst (February’s stone) at its tip, along with 29 other step-cut amethysts, plus turquoise (December’s birth­stone) cabochons and brilliant cut diamonds (April’s gemstone). This thrilling display of birthstones was set in dazzling gold. The Duchess, never one to shy away from attention, debuted this birthstone beauty at a gala in Versailles, turning heads in a striking strapless gown that highlighted the necklace’s Indian-inspired style and color. It is believed that the Duke showered the Duchess with such treasures to make up for the throne he could not give her. Edward VIII and Wallis Simpson, 1937

Aside from being colorful beauties, birthstones offer you their own unique radiance and qualities, with effects that can be uplifting and energizing, soothing, strengthening, and healing, depending upon the stone’s quality. If you have ever gazed into a large, faceted September’s sapphire and felt its calm, warm beauty, or found yourself excited to discover a universe that exists in October’s opal, you have experienced the wondrous power of birthstones. E

Whether you wear your own birthstone as a sacred gem throughout the year or like to celebrate the month by wearing its stone, you have so many options: bracelets, earrings, necklaces, pendants, or rings. And did you know that some believe how you wear a birthstone changes the effect it has on you? For rings, the pinkie or little finger influences your life force; the ring finger, achieving your aspirations; the middle finger, your personality; the fore­ finger, your self-control; and the thumb, your strength and concentration. While others believe it is simply a matter of fashion and taste, it’s always wonderful to leave yourself open to positive influences! As for pendants, many like to wear them high, but it is said that a birthstone’s

power is intensified when worn closer to the middle of your chest, near your heart chakra, the center of unconditional love and compassion. While on Aruba, be sure to visit the many fine jewelers to discover the vast array of stunning birthstone jewelry available. From the simple to the sublime, you will find something to suit your style and budget. K

to attract love and strengthen fertility.

to possess both wisdom and long-lasting youth.

Did you know? Ancient Romans dedicated

Did you know? Cleopatra is said to have

the emerald to Venus, goddess of love.

dissolved pearls in her wine to drink.

to achieve the manifestation of your heart’s desires.

Did you know? In ancient times, it was thought

to possess power, strength, and influence. Did you know? According to legend, peridot

that the wearer of a ruby would possess health, wealth, wisdom, and love. No wonder it was christened the “king of gems”!

could reduce anger and jealousy... so wear this green stone to avoid becoming green with envy!

to possess luck, creativity, and confidence.

Personal and precious, birthstones add meaning to your jewelry and your life: 1 • JANUARY • GARNET

to attract trust and long-lasting friendships.

to surround yourself with truth, faithfulness, and peace of mind.

Did you know? Garnet comes from granatum,

to possess clarity and courage.

Did you know? Ancient Persians believed

meaning “seed,” because a garnet stone resembles a pomegranate seed.

Did you know? At one time, only royalty

were allowed to wear this rich purple gem!

the earth rested on a giant sapphire, and its reflection gave the sky its color.

Did you know? Considered capable of attracting a multitude of good fortune because opals possess the virtues of each gemstone whose hue is captured within its spectrum of colors.

to possess success and good fortune.

to surround yourself with serenity and protection.

to attract love, affection, and fidelity.

Did you know? To guarantee a safe voyage

Did you know? The name diamond comes

Did you know? Its name comes from

from adamas, which is Greek for “invincible.”

Did you know? Turquoise was believed to be a love charm and purification stone that dispelled negative energy.

the French citron, which means lemon, and is revered as a gift from the sun. 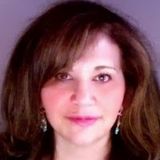