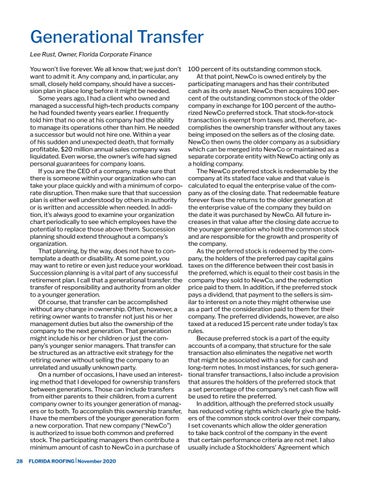 Generational Transfer Lee Rust, Owner, Florida Corporate Finance You won’t live forever. We all know that; we just don’t want to admit it. Any company and, in particular, any small, closely held company, should have a succession plan in place long before it might be needed. Some years ago, I had a client who owned and managed a successful high-tech products company he had founded twenty years earlier. I frequently told him that no one at his company had the ability to manage its operations other than him. He needed a successor but would not hire one. Within a year of his sudden and unexpected death, that formally profitable, $20 million annual sales company was liquidated. Even worse, the owner’s wife had signed personal guarantees for company loans. If you are the CEO of a company, make sure that there is someone within your organization who can take your place quickly and with a minimum of corporate disruption. Then make sure that that succession plan is either well understood by others in authority or is written and accessible when needed. In addition, it’s always good to examine your organization chart periodically to see which employees have the potential to replace those above them. Succession planning should extend throughout a company’s organization. That planning, by the way, does not have to contemplate a death or disability. At some point, you may want to retire or even just reduce your workload. Succession planning is a vital part of any successful retirement plan. I call that a generational transfer: the transfer of responsibility and authority from an older to a younger generation. Of course, that transfer can be accomplished without any change in ownership. Often, however, a retiring owner wants to transfer not just his or her management duties but also the ownership of the company to the next generation. That generation might include his or her children or just the company’s younger senior managers. That transfer can be structured as an attractive exit strategy for the retiring owner without selling the company to an unrelated and usually unknown party. On a number of occasions, I have used an interesting method that I developed for ownership transfers between generations. Those can include transfers from either parents to their children, from a current company owner to its younger generation of managers or to both. To accomplish this ownership transfer, I have the members of the younger generation form a new corporation. That new company (“NewCo”) is authorized to issue both common and preferred stock. The participating managers then contribute a minimum amount of cash to NewCo in a purchase of 28

100 percent of its outstanding common stock. At that point, NewCo is owned entirely by the participating managers and has their contributed cash as its only asset. NewCo then acquires 100 percent of the outstanding common stock of the older company in exchange for 100 percent of the authorized NewCo preferred stock. That stock-for-stock transaction is exempt from taxes and, therefore, accomplishes the ownership transfer without any taxes being imposed on the sellers as of the closing date. NewCo then owns the older company as a subsidiary which can be merged into NewCo or maintained as a separate corporate entity with NewCo acting only as a holding company. The NewCo preferred stock is redeemable by the company at its stated face value and that value is calculated to equal the enterprise value of the company as of the closing date. That redeemable feature forever fixes the returns to the older generation at the enterprise value of the company they build on the date it was purchased by NewCo. All future increases in that value after the closing date accrue to the younger generation who hold the common stock and are responsible for the growth and prosperity of the company. As the preferred stock is redeemed by the company, the holders of the preferred pay capital gains taxes on the difference between their cost basis in the preferred, which is equal to their cost basis in the company they sold to NewCo, and the redemption price paid to them. In addition, if the preferred stock pays a dividend, that payment to the sellers is similar to interest on a note they might otherwise use as a part of the consideration paid to them for their company. The preferred dividends, however, are also taxed at a reduced 15 percent rate under today’s tax rules. Because preferred stock is a part of the equity accounts of a company, that structure for the sale transaction also eliminates the negative net worth that might be associated with a sale for cash and long-term notes. In most instances, for such generational transfer transactions, I also include a provision that assures the holders of the preferred stock that a set percentage of the company’s net cash flow will be used to retire the preferred. In addition, although the preferred stock usually has reduced voting rights which clearly give the holders of the common stock control over their company, I set covenants which allow the older generation to take back control of the company in the event that certain performance criteria are not met. I also usually include a Stockholders’ Agreement which 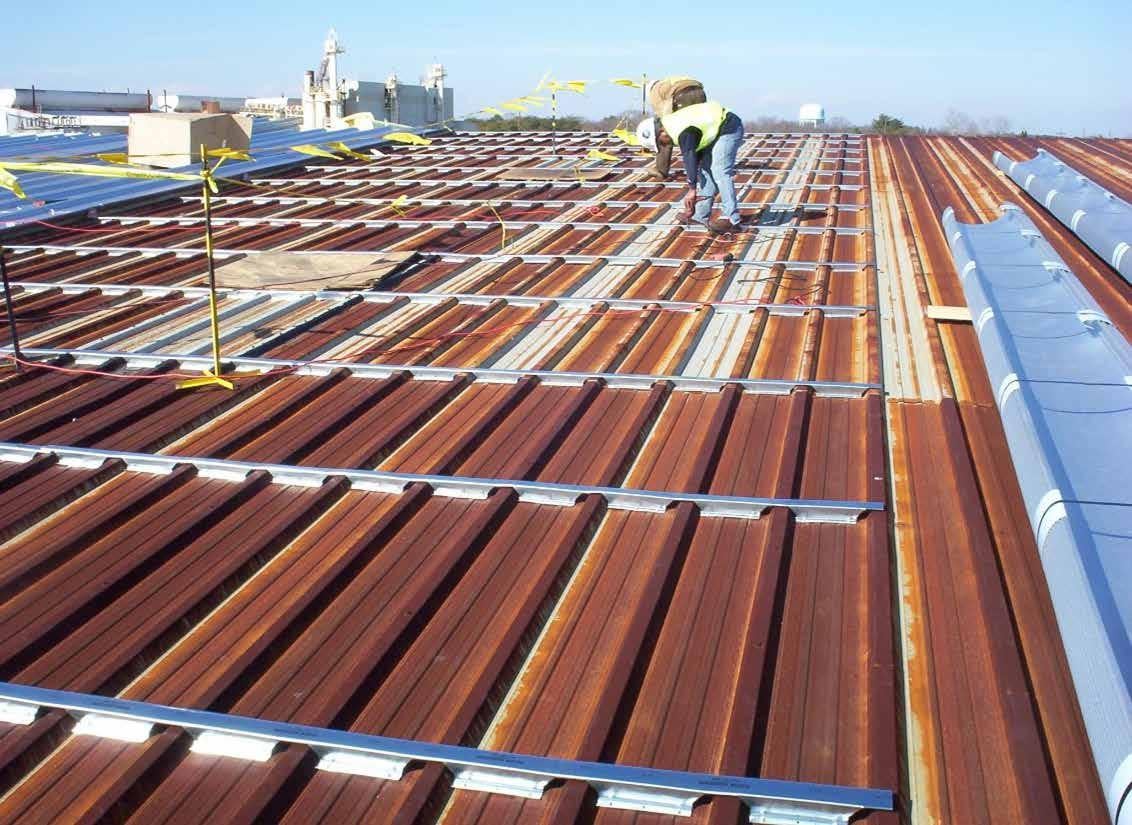 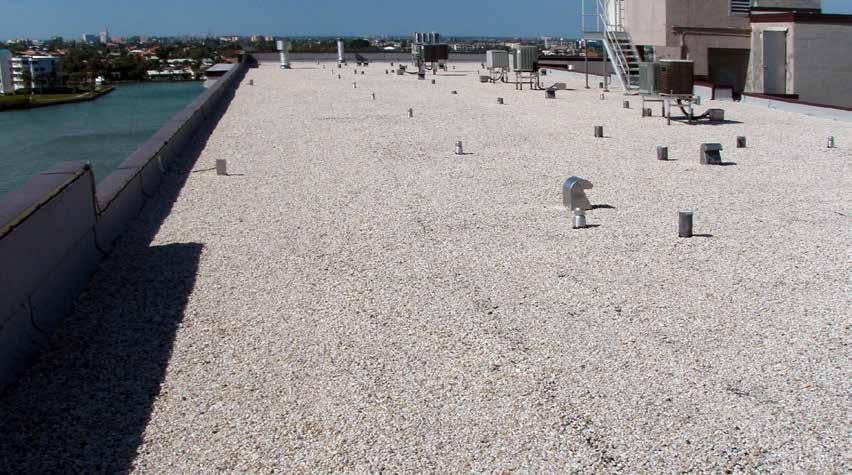 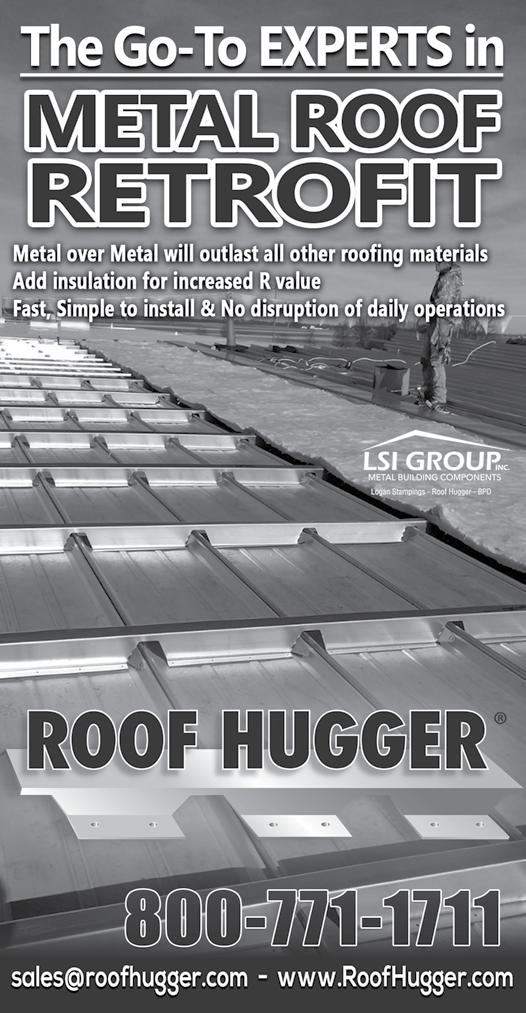 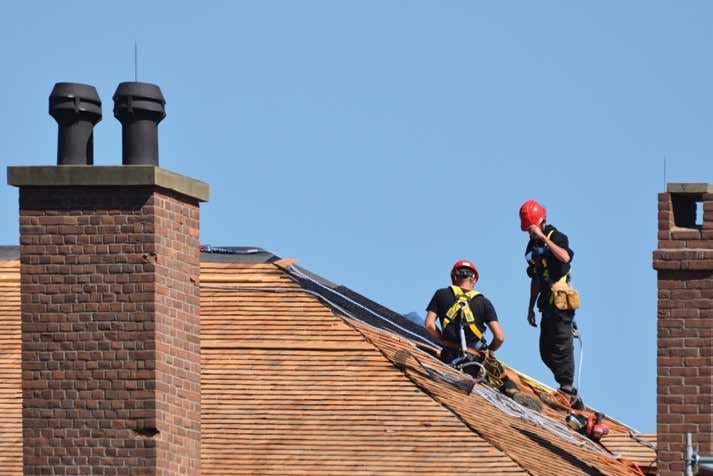