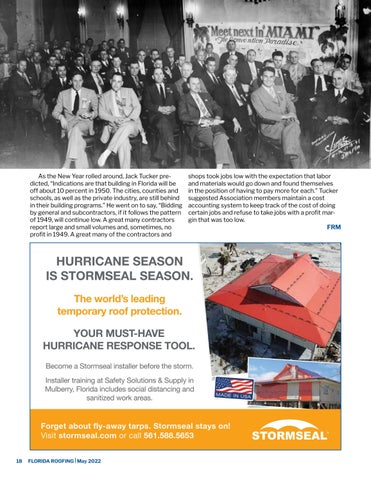 As the New Year rolled around, Jack Tucker predicted, “Indications are that building in Florida will be off about 10 percent in 1950. The cities, counties and schools, as well as the private industry, are still behind in their building programs.” He went on to say, “Bidding by general and subcontractors, if it follows the pattern of 1949, will continue low. A great many contractors report large and small volumes and, sometimes, no profit in 1949. A great many of the contractors and

shops took jobs low with the expectation that labor and materials would go down and found themselves in the position of having to pay more for each.” Tucker suggested Association members maintain a cost accounting system to keep track of the cost of doing certain jobs and refuse to take jobs with a profit margin that was too low. FRM