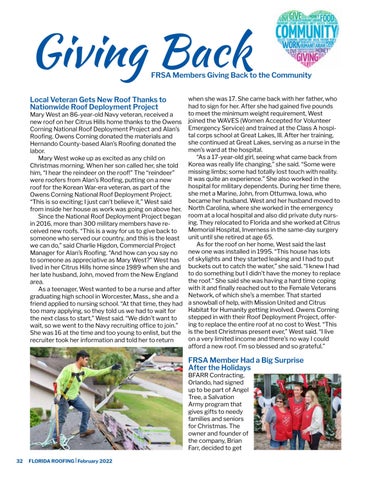 FRSA Members Giving Back to the Community

when she was 17. She came back with her father, who had to sign for her. After she had gained five pounds to meet the minimum weight requirement, West Mary West an 86-year-old Navy veteran, received a new roof on her Citrus Hills home thanks to the Owens joined the WAVES (Women Accepted for Volunteer Corning National Roof Deployment Project and Alan’s Emergency Service) and trained at the Class A hospital corps school at Great Lakes, Ill. After her training, Roofing. Owens Corning donated the materials and she continued at Great Lakes, serving as a nurse in the Hernando County-based Alan’s Roofing donated the men’s ward at the hospital. labor. “As a 17-year-old girl, seeing what came back from Mary West woke up as excited as any child on Korea was really life changing,” she said. “Some were Christmas morning. When her son called her, she told missing limbs; some had totally lost touch with reality. him, “I hear the reindeer on the roof!” The “reindeer” It was quite an experience.” She also worked in the were roofers from Alan’s Roofing, putting on a new hospital for military dependents. During her time there, roof for the Korean War-era veteran, as part of the she met a Marine, John, from Ottumwa, Iowa, who Owens Corning National Roof Deployment Project. became her husband. West and her husband moved to “This is so exciting; I just can’t believe it,” West said North Carolina, where she worked in the emergency from inside her house as work was going on above her. room at a local hospital and also did private duty nursSince the National Roof Deployment Project began ing. They relocated to Florida and she worked at Citrus in 2016, more than 300 military members have reMemorial Hospital, Inverness in the same-day surgery ceived new roofs. “This is a way for us to give back to unit until she retired at age 65. someone who served our country, and this is the least As for the roof on her home, West said the last we can do,” said Charlie Higdon, Commercial Project new one was installed in 1995. “This house has lots Manager for Alan’s Roofing. “And how can you say no of skylights and they started leaking and I had to put to someone as appreciative as Mary West?” West has buckets out to catch the water,” she said. “I knew I had lived in her Citrus Hills home since 1989 when she and to do something but I didn’t have the money to replace her late husband, John, moved from the New England the roof.” She said she was having a hard time coping area. with it and finally reached out to the Female Veterans As a teenager, West wanted to be a nurse and after Network, of which she’s a member. That started graduating high school in Worcester, Mass., she and a a snowball of help, with Mission United and Citrus friend applied to nursing school. “At that time, they had Habitat for Humanity getting involved. Owens Corning too many applying, so they told us we had to wait for stepped in with their Roof Deployment Project, offerthe next class to start,” West said. “We didn’t want to ing to replace the entire roof at no cost to West. “This wait, so we went to the Navy recruiting office to join.” is the best Christmas present ever,” West said. “I live She was 16 at the time and too young to enlist, but the on a very limited income and there’s no way I could recruiter took her information and told her to return afford a new roof. I’m so blessed and so grateful.”

FRSA Member Had a Big Surprise After the Holidays BFARR Contracting, Orlando, had signed up to be part of Angel Tree, a Salvation Army program that gives gifts to needy families and seniors for Christmas. The owner and founder of the company, Brian Farr, decided to get 32