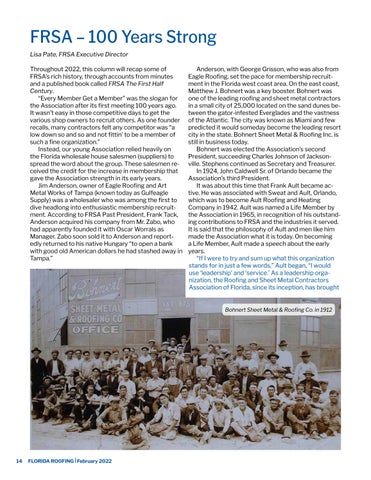 FRSA – 100 Years Strong Lisa Pate, FRSA Executive Director Throughout 2022, this column will recap some of FRSA’s rich history, through accounts from minutes and a published book called FRSA The First Half Century. “Every Member Get a Member” was the slogan for the Association after its first meeting 100 years ago. It wasn’t easy in those competitive days to get the various shop owners to recruit others. As one founder recalls, many contractors felt any competitor was “a low down so and so and not fittin’ to be a member of such a fine organization.” Instead, our young Association relied heavily on the Florida wholesale house salesmen (suppliers) to spread the word about the group. These salesmen received the credit for the increase in membership that gave the Association strength in its early years. Jim Anderson, owner of Eagle Roofing and Art Metal Works of Tampa (known today as Gulfeagle Supply) was a wholesaler who was among the first to dive headlong into enthusiastic membership recruitment. According to FRSA Past President, Frank Tack, Anderson acquired his company from Mr. Zabo, who had apparently founded it with Oscar Worrals as Manager. Zabo soon sold it to Anderson and reportedly returned to his native Hungary “to open a bank with good old American dollars he had stashed away in Tampa.”

Anderson, with George Grisson, who was also from Eagle Roofing, set the pace for membership recruitment in the Florida west coast area. On the east coast, Matthew J. Bohnert was a key booster. Bohnert was one of the leading roofing and sheet metal contractors in a small city of 25,000 located on the sand dunes between the gator-infested Everglades and the vastness of the Atlantic. The city was known as Miami and few predicted it would someday become the leading resort city in the state. Bohnert Sheet Metal &amp; Roofing Inc. is still in business today. Bohnert was elected the Association’s second President, succeeding Charles Johnson of Jacksonville. Stephens continued as Secretary and Treasurer. In 1924, John Caldwell Sr. of Orlando became the Association’s third President. It was about this time that Frank Ault became active. He was associated with Sweat and Ault, Orlando, which was to become Ault Roofing and Heating Company in 1942. Ault was named a Life Member by the Association in 1965, in recognition of his outstanding contributions to FRSA and the industries it served. It is said that the philosophy of Ault and men like him made the Association what it is today. On becoming a Life Member, Ault made a speech about the early years. “If I were to try and sum up what this organization stands for in just a few words,” Ault began, “I would use ‘leadership’ and ‘service.’ As a leadership organization, the Roofing and Sheet Metal Contractors Association of Florida, since its inception, has brought