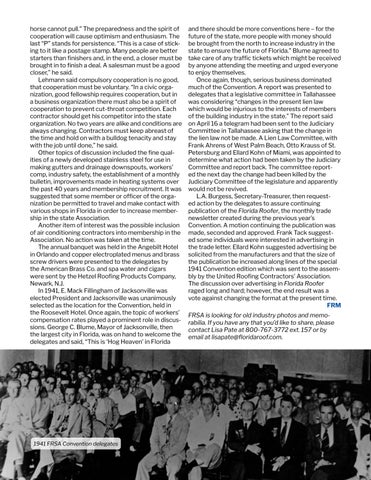 horse cannot pull.” The preparedness and the spirit of cooperation will cause optimism and enthusiasm. The last “P” stands for persistence. “This is a case of sticking to it like a postage stamp. Many people are better starters than finishers and, in the end, a closer must be brought in to finish a deal. A salesman must be a good closer,” he said. Lehmann said compulsory cooperation is no good, that cooperation must be voluntary. “In a civic organization, good fellowship requires cooperation, but in a business organization there must also be a spirit of cooperation to prevent cut-throat competition. Each contractor should get his competitor into the state organization. No two years are alike and conditions are always changing. Contractors must keep abreast of the time and hold on with a bulldog tenacity and stay with the job until done,” he said. Other topics of discussion included the fine qualities of a newly developed stainless steel for use in making gutters and drainage downspouts, workers’ comp, industry safety, the establishment of a monthly bulletin, improvements made in heating systems over the past 40 years and membership recruitment. It was suggested that some member or officer of the organization be permitted to travel and make contact with various shops in Florida in order to increase membership in the state Association. Another item of interest was the possible inclusion of air conditioning contractors into membership in the Association. No action was taken at the time. The annual banquet was held in the Angebilt Hotel in Orlando and copper electroplated menus and brass screw drivers were presented to the delegates by the American Brass Co. and spa water and cigars were sent by the Hetzel Roofing Products Company, Newark, N.J. In 1941, E. Mack Fillingham of Jacksonville was elected President and Jacksonville was unanimously selected as the location for the Convention, held in the Roosevelt Hotel. Once again, the topic of workers’ compensation rates played a prominent role in discussions. George C. Blume, Mayor of Jacksonville, then the largest city in Florida, was on hand to welcome the delegates and said, “This is ‘Hog Heaven’ in Florida

and there should be more conventions here – for the future of the state, more people with money should be brought from the north to increase industry in the state to ensure the future of Florida.” Blume agreed to take care of any traffic tickets which might be received by anyone attending the meeting and urged everyone to enjoy themselves. Once again, though, serious business dominated much of the Convention. A report was presented to delegates that a legislative committee in Tallahassee was considering “changes in the present lien law which would be injurious to the interests of members of the building industry in the state.” The report said on April 16 a telegram had been sent to the Judiciary Committee in Tallahassee asking that the change in the lien law not be made. A Lien Law Committee, with Frank Ahrens of West Palm Beach, Otto Krauss of St. Petersburg and Ellard Kohn of Miami, was appointed to determine what action had been taken by the Judiciary Committee and report back. The committee reported the next day the change had been killed by the Judiciary Committee of the legislature and apparently would not be revived. L.A. Burgess, Secretary-Treasurer, then requested action by the delegates to assure continuing publication of the Florida Roofer, the monthly trade newsletter created during the previous year’s Convention. A motion continuing the publication was made, seconded and approved. Frank Tack suggested some individuals were interested in advertising in the trade letter. Ellard Kohn suggested advertising be solicited from the manufacturers and that the size of the publication be increased along lines of the special 1941 Convention edition which was sent to the assembly by the United Roofing Contractors’ Association. The discussion over advertising in Florida Roofer raged long and hard; however, the end result was a vote against changing the format at the present time. FRM FRSA is looking for old industry photos and memorabilia. If you have any that you’d like to share, please contact Lisa Pate at 800-767-3772 ext. 157 or by email at lisapate@floridaroof.com.