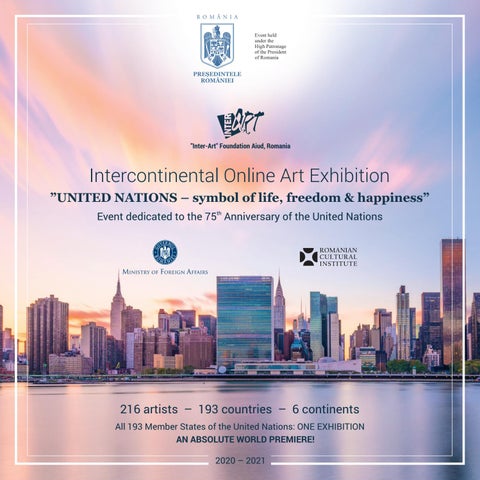 Project initiated and organized by the “Inter-Art” Foundation Aiud, Romania, under the High Patronage of H.E. Klaus Werner Iohannis, President of Romania. Event supported by the Ministry of Foreign Affairs of Romania and the Romanian Cultural Institute.

This event represents an absolute world premiere since for the ďŹ rst time in history artists from all the 193 Member States of the United Nations are gathered in one unique and dedicated exhibition. Each State is represented by a single artist chosen with great care. For the initiating country â&amp;#x20AC;&amp;#x201C; Romania - 24 artists were selected from a multi-ethnic spectrum. Each work was specially created for this unique moment, with identical dimensions and format. Our intention is to make a giant puzzle, a symbol of friendship between all the nations of the world. This event initiated by the &quot;Inter-Art&quot; Foundation Aiud wishes to bring a tribute to celebrate this extraordinary event and to prove that, through art, we can create a better world - one of freedom and coexistence, of cooperation and understanding, and of unity between people, nations and cultures. It is our gift, Romania&#39;s gift for the UN celebration, a symbolic gesture through which we want to mark this moment with a very special and unprecedented event.

Three quarters of a century after the creation of the United Nations, Romania marks a world premiere by organizing the world exhibition &quot;The United Nations - symbol of life, freedom and happiness.â&amp;#x20AC;? It is thus for the ďŹ rst time in the 75 years of the UN&#39;s existence that artists from all Member States gather their contributions in an outstanding global project, as an expression of the capacity of the human spirit to generate solidarity and harmony. I would like to congratulate the &quot;Inter-Art&quot; Foundation for the accomplishment of this project, whose composing works create an original expression of modern art. Art has always been the universal language that brought people together, beyond space and time. By relentlessly fostering the links between

generations and at the same time contributing to the encounter between the various cultures, art has managed to create, over the centuries, a bridge of dialogue among civilizations. The exhibition inaugurated today is a symbolic fresco of our times, created in a context in which we need - more than ever - solidarity and understanding. This event represents Romania&#39;s special contribution to the anniversary of the UN, this year marking also the 65th celebration of our country&#39;s accession to the Organization. Not by chance, the key factor that made this exhibition possible is the same as the one that motivated the UN action since its creation in 1945 and that guarantees the Organization&#39;s success in demonstrating the â&amp;#x20AC;?art of unityâ&amp;#x20AC;? between nations on ahead: international cooperation, for the beneďŹ t of our citizens. I hope this unique project will be exhibited at the UN headquarters in New York too, when the conditions will be right, as a gesture accompanying Romania&#39;s constant initiatives for peace and solidarity among peoples.

A beautiful dream becomes reality with this project, unique in its own way. An achievement that fully deďŹ nes the concept of the Inter-Art Foundation to unite all the nations of the world through art. We have always believed in this motto and in these 25 years since we have existed we have done our best to prove that the art and culture of a nation is the best ambassador. This exhibition is ďŹ rst and foremost an absolute world premiere by involving all 193 UN member states. And what could be a better occasion than the 75th anniversary of this prestigious world organization. The year 2020 is a crossroads for our society and for human relations. Through this exhibition, through the message of each involved artist, we bring a planetary homage to the UN as a sign of respect for everything it represents and for everything it has accomplished in its 75 years of existence.

What we offer is unique and artistically, representing a fascinating variety of techniques and styles, based on the proposed theme. The cultural aspect of each people is the proof of its identity. Our anniversary gift is the respect of the 193 nations that express themselves through their artists for the hope of a better future in the construction of which the UN has a decisive role. It was an extremely long work, a diﬃcult dialogue with hundreds of artists and a rigorous selection in which the main element was VALUE. The result shows very clear that nothing was in vain. This exhibition is a historic moment not just a world premiere. It is an anniversary gift but also an intercontinental event that offers an equal chance to the countries around the world to assert themselves through their art. From my point of view, art is not a competition; it is the way of expression through which we can identify spiritually. It can be good or bad, bright or mediocre. What we offer you is above all a sincere art, unaltered by cheap aspects of marketing or commercial spirit. It is the global expression of deep feelings through which we want a better world under the auspices of the UN.

Democratic Republic of the Congo

Gambia (Republic of The)

Saint Vincent and the Grenadines

The “Inter-Art” Foundation was set up in 1996 and proposes an alternative approach to contemporary art, as a link between civilizations and cultures, opening a worldwide arena for contemporary artists thanks to his active founding members Ștefan Balog, Ioan Hădărig, Robert Lixandru and those who have joined them over the time in coordinating projects: Zoltán Balog, Elena Cristea and Andrei Bakó. The basic principles and purposes are: representing contemporary art, discovering an area of cultural interference between artists from Romania and around the world and the organization of an international art camp in Aiud which aims to bring a new perspective to the contemporary art scene each year.

Projects organized by the “Inter-Art” Foundation (selected) The international art camp from Aiud was created in 1996 at the initiative of fine artist Stefan Balog and gathered in 24 editions over 330 artists from 66 countries. The studios (painting, graphics, engraving, sculpture, installations) exhibitions and symposiums have contributed to making this camp one of the most important in the world. The International Youth Creative Camp was also organized for 10 years. This camp was designed for young people between the ages of 12 and 16 and brought together over 160 young artists from 9 countries. “Trance Mixion” computer music concert, performed by Sorin Anca and Robert Lixandru (1999, 2000). In August 2000 the “Inter-Art” Galleries were inaugurated. The 10th edition of the “Inter-Art” International Art Camp is celebrated with the inauguration of the “Inter-Art” Contemporary Art Gallery (the future museum). In May 2008, the “Inter-Art” Foundation organized the “Prison Art” Camp which took place in the Maximum Security Prison in Aiud with the participation of 10 visual artists from Austria, Haiti, Morocco, Germany, Italy, Hungary, Romania, along with 7 imprisoned people. Inauguration of the Small sculpture park in Rome Square, Aiud with works created in the “Inter-Art” camps Aiud (October 2016).

The “Inter-Art” Intercontinental Biennial of Small Graphics 2006 - 2018 (7 editions) gathered 770 works from 67 countries. The International Mail Art Exhibitions, initiated by Ioan Hădărig. So far 26 editions have been organized on different themes. The “Inter-Art” Workshop of Photographic Art, an event of photographic investigation and creation for photographers eager to experience the “Inter-Art phenomenon” in Aiud (July 2017).

The Interethnic Camp of Contemporary Art Aiud which reunited – in a national premiere – 34 contemporary artists belonging to the 21 ethnicities with representation in the Parliament of Romania (2016, 2018)

International Symposium of Marble Sculpture “100 – The Touch of Time” Aiud, Romania, initiated by the Aiud City Hall and Local Council (May 2018)

Recognitions In spring 2000, at the initiative of the “Inter-Art” Foundation Aiud and by the decision of the Local Council, Aiud Municipality received the title “City of Arts” as a recognition for the important artistic events which took place. The cultural medal of the Vichy Municipality in France at the 54th edition of the Bourbonnaise Art Exhibition (April 2010). The High Patronage of the President of Romania, granted at the initiative of the “Inter-Art” Foundation Aiud and Department for Interethnic Relations - General Secretariat of the Government, Romania, for the following three events: - Interethnic Camp of Contemporary Art, Aiud, Romania (5 – 15 June 2018); - ”Images of Diversity”, “Inter-Art” International Exhibition in Belgium, European Parliament, Brussels (26 – 30 June 2018); - ”Multicultural Identities”, Romanian Contemporary Art Exhibition, New York, UN Headquarters (27 - 31 May 2019). The “Inter-Art” Foundation, Romania has contacts with similar organisations and artists from all the other 192 Member States of the United Nations, from all continents.

Copyright © 2020 The “Inter-Art” Foundation Aiud, Romania The information in this album may not, under any circumstances, be reproduced in any way, either by electronic or by mechanical means (photocopying, recording, storage and download are prohibited) without prior written permission from the publisher. The consultation of the catalogue for personal use is most welcomed.

AIUD â&amp;#x20AC;&amp;#x201C; CITY OF ARTS The place where the concept of this project was born

Event held under the High Patronage of the President of Romania "UNITED NATIONS - symbol of life, freedom & happiness Intercontinental Online Art Exhibition 2020 – 2021 Event dedicated to the 75th Anniversary of the United Nations 216 artists – 193 countries – 6 continents All 193 Member States of the United Nations: ONE EXHIBITION AN ABSOLUTE WORLD PREMIERE! details: www.inter-art.ro/un2020 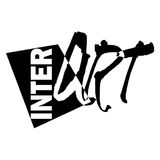