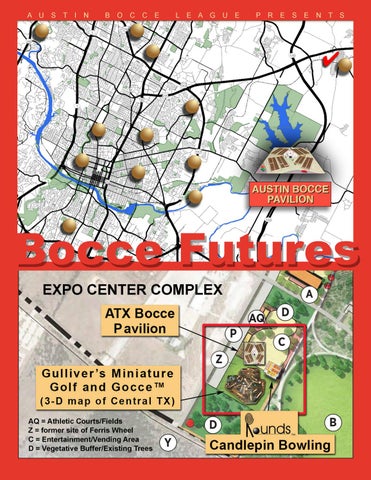 Austin Bocce League presents its vision for the Future of Bocce in Central Texas and especially at the Walter E. Long Park which is undergoing an epic revitalization. This eMag presents the "gestalt" of the world of Bocce with its competitions and fundraising power. Also includes 3 amenities for the park: 1) the ATX Bocce Pavilion 2) Gulliver's Golf and Gocce™ built on a 2-acre topo map of Central Texas; and 3) Rounds™ Candlepin Bowling Center. Gocce™ is a new patent-pending sport that includes rolling bocce balls on a miniature golf course; along with golf cups on bocce courts with or without hills and valleys.