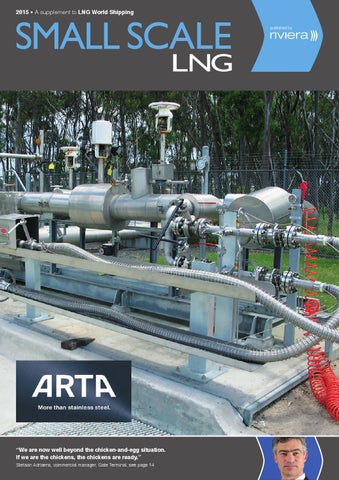 2015 • A supplement to LNG World Shipping

“We are now well beyond the chicken-and-egg situation. If we are the chickens, the chickens are ready.” Stefaan Adriaens, commercial manager, Gate Terminal, see page 14

Don’t miss out! Order your personal copy today! Only subscribers get the complete package which includes:

LNG World Shipping is the number one publication for the LNG shipping industry, and the most informative and up to date source of information for all things LNG and shipping! Duncan Gaskin, Bestobell LNG Valves

With subscriptions from just £299 this represents incredible value when you consider everything you get. To order your personal copy today, just visit www.lngworldshipping.com and click on subscribe or contact sally.church@rivieramm.com t: +44 20 8370 7018 Free supplements 2014 • A supplement to LNG World Shipping

2014 • A supplement to LNG World Shipping

2014 • A supplement to LNG World Shipping

“As part of our effort to continuously improve our LNG carrier repair service, we listen to our clients’ feedback and make sure our organisation does something with it!” Jos Goris, managing director, Damen Shiprepair Brest

“Our floating LNG play is not limited to production vessels. We are also committed to regasification units and willing to invest in infrastructure to open up new markets.” Maarten Wetselaar, executive vice president of Shell’s integrated gas business

One of the world’s leading seabourne transporters of liquid gas “While prospective LNG-fuelled vessel owners may have access to capital, our solution helps them with capital resource efficiency using a classic capex to opex model.” Pace Ralli, co-founder, Clean Marine Energy

8 LNG-fuelled vessels in service and on order

bunker vessels 28 Developing LNG as vessel fuel will require purpose-built vessels to supply the gas – but who has the confidence to move first?

43 All the latest developments in small-scale LNG shipping

Disclaimer: Although every effort has been made to ensure that the information in this publication is correct, the Author and Publisher accept no liability to any party for any inaccuracies that may occur. Any third party material included with the publication is supplied in good faith and the Publisher accepts no liability in respect of content. All rights reserved. No part of this publication may be reproduced, reprinted or stored in any electronic medium or transmitted in any form or by any means without prior written permission of the copyright owner. A member of:

Viking Grace is setting the pace – burning 23,000 tonnes of LNG a year

atural gas is not only the cleanest-burning fossil fuel but is available in sufficient quantities to last for 100 years at current consumption rates.

These two factors are driving an extension of the LNG

The total of LNG-powered ships on order has grown even more quickly, by 42 per cent to 81 vessels. The current orderbook contains vessels that are, in general, larger than those in service, and features two lowspeed dual-fuel engine technologies for the first time.

Remote locations not linked to pipeline grids are

anxious to take advantage of the environmental and

will no doubt add to the attractions of LNG bunkers.

The use of LNG as marine fuel presents cost challenges

The use of LNG as fuel in high-horsepower applications,

that extend beyond the LNG itself and shipboard gas-

including as a means of powering seagoing and inland

waterway vessels, is a key driver in the nascent spread of this

such ships, placed over the past 10 months constitute an important milestone.

similar projects are getting underway in North American

They will not only streamline bunkering logistics for

waters. These three zones constitute the current ledger of

the new generation of larger LNG-fuelled ships but provide

a springboard for further supply chain cost reductions and

The LNG-powered fleet continues to grow, albeit not

quite at the rates some industry watchers were predicting as

support from a tightening regulatory regime. The draft of

recently as 18 months ago.

the International Code of Safety for Ships using Gases or

The list of LNG-powered ships in service that LNG

World Shipping itemises from page eight of this year’s small-

in principle at the 94th session of IMO’s Marine Safety

scale LNG supplement shows that this fleet expanded by

The instrument is scheduled to be adopted at MSC95 in June 2015 and to enter into force in January 2017. LNG

LNG-fuelled fleet makes slow but sure progress LNG as marine fuel faces stiff competition and progress has been slower than envisaged, writes Mike Corkhill. But the growth fundamentals are in place

he buoyant forecasts of two or three years ago on the number of LNG-powered vessels that would be in service by 2015 will not be met.

The capital costs associated with a commitment to

LNG fuelling have been a key determining factor, and the drop in the price of oil over the past 10 months has not helped the promoters of LNG as marine fuel. The relatively slow build-up in LNG bunkering infrastructure has also prompted a number of shipowners to consider other fuel solutions.

Terntank is building four 15,000 dwt tankers that will be

streams collected on board. As of 1 February 2015 the

fleet of in-service and on-order vessels opting for scrubbers

Based on capital costs, fuel availability and fuel price, shipowners have three realistic ways of meeting the ECA

restrictions. LNG is one of them, the other two being

By far the most popular fuel solution for the shipping

the burning of low-sulphur marine diesel oil (MDO) and

industry for its vessels when sailing in ECAs has been,

the continued consumption of heavy fuel oil (HFO) on

and will continue to be for the foreseeable future, the

Scrubbers come with their own investment costs

The recent fall in oil prices has reduced the disparity

and operational challenges such as disposal of the waste

The biggest challenge for the MDO fraternity is

likely to come in either 2020 or, more probably, in

2025, when the reduction in the global sulphur cap,

The ability of refiners to produce sufficient quantities

alterations to their crude oil distillation processes will

be open to question.

In addition, by that time oil prices are expected to

have rebounded while LNG, thanks to plentiful gas

reserves worldwide and a much more extensive bunkering

beginning on page 8 shows 66 such vessels in service and

stood at approximately 150, putting it on a par with the

81 on order, up from 52 and 57, respectively, featured in our tabulation of 12 months ago. Considering the fuelprice shifts and geopolitical uncertainties of the past year, this year’s totals represent a healthy jump. As shown in the LNG-powered fleet by ship type table opposite, what is notable in the 2015 summations is the extent to which shipowners contracting container ships, product/chemical tankers, tugs and gas ships that are not LNG carriers have opted for LNG fuel. Not shown in our tabulations are several container ships and tankers that have recently been ordered that will be built to an LNG-ready specification. These include more than 20 very large container ships with capacities in excess of 18,000 TEU. Some are skeptical that such vessels will ever have

TOTE’s inaugural Marlin-class container ship will be the

the modification work needed to enable burning of

first vessel in service with an ME-GI propulsion system

gas, but certain favourable conditions may dictate otherwise. These are the likely presence of several

go into service in late 2015, sailing between Florida and

Puerto Rico. The newbuilding, the first of a pair, will

routes, the introduction of the global sulphur cap

mark significant milestones for both LNG as marine fuel

and the rebound of oil prices.

and the shipping industry in general.

The other distinctive feature of the LNG-powered

It will also signal the start of the performance

fleet orderbook is the fact that the ships are, on average,

considerably larger than the in-service vessels.

shipowners will be monitoring the data accumulation

to require refuelling by dedicated bunker vessels than

Supporters of LNG-powered ships may have had to set

the existing ships, which take on their relatively limited

their sights lower in recent months but there is no denying

quantities of LNG via jetty-side transfers from road

the groundswell of momentum building in favour of this

tankers or from shoreside fuelling stations.

Since July 2014 five LNG bunker vessels have been

The coverage of small-scale LNG developments in

ordered and these will add an important new dimension

this supplement and in regular issues of LNG World

to the global infrastructure required to support gas as

projects now under way and planned. And most oil-

patch gurus are predicting a rebound in crude prices sooner rather than later. The LNG optimists believe there are more cards stacked in their favour than against. LNG

the 14 in service. The emergence of larger LNG-powered vessels is also reflected in the engine choice for the ships on order. Recent advances in propulsion technology have made

LNG-POWERED FLEET BY ENGINE TYPE, 1 MAY 2015 In service

MAN Diesel & Turbo (MDT) has stepped in with

is offering its low-pressure RT-flex50DF two-stroke engine. Both offer significant efficiency improvements over medium-speed dual-fuel engines and have made significant breakthroughs. The first vessel to be propelled by ME-GI engines – a Marlin-class 3,100 TEU container ship for TOTE – will

Gas + oil Not yet known Total

want to read more? subscribe to LNG world shipping and get this supplement for free visit: www.lngworldshipping.com