US Black Engineer & IT Volume 43 Number 3 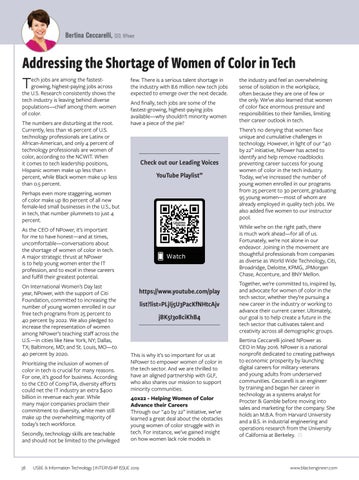 Addressing the Shortage of Women of Color in Tech T

ech jobs are among the fastestgrowing, highest-paying jobs across the U.S. Research consistently shows the tech industry is leaving behind diverse populations—chief among them: women of color.

few. There is a serious talent shortage in the industry with 8.6 million new tech jobs expected to emerge over the next decade. And finally, tech jobs are some of the fastest-growing, highest-paying jobs available—why shouldn’t minority women have a piece of the pie?

Perhaps even more staggering, women of color make up 80 percent of all new female-led small businesses in the U.S., but in tech, that number plummets to just 4 percent.

Prioritizing the inclusion of women of color in tech is crucial for many reasons. For one, it’s good for business. According to the CEO of CompTIA, diversity efforts could net the IT industry an extra $400 billion in revenue each year. While many major companies proclaim their commitment to diversity, white men still make up the overwhelming majority of today’s tech workforce. Secondly, technology skills are teachable and should not be limited to the privileged

There’s no denying that women face unique and cumulative challenges in technology. However, in light of our “40 by 22” initiative, NPower has acted to identify and help remove roadblocks preventing career success for young women of color in the tech industry. Today, we’ve increased the number of young women enrolled in our programs from 25 percent to 30 percent, graduating 95 young women—most of whom are already employed in quality tech jobs. We also added five women to our instructor pool. While we’re on the right path, there is much work ahead—for all of us. Fortunately, we’re not alone in our endeavor. Joining in the movement are thoughtful professionals from companies as diverse as World Wide Technology, Citi, Broadridge, Deloitte, KPMG, JPMorgan Chase, Accenture, and BNY Mellon.

As the CEO of NPower, it’s important for me to have honest—and at times, uncomfortable—conversations about the shortage of women of color in tech. A major strategic thrust at NPower is to help young women enter the IT profession, and to excel in these careers and fulfill their greatest potential. On International Women’s Day last year, NPower, with the support of Citi Foundation, committed to increasing the number of young women enrolled in our free tech programs from 25 percent to 40 percent by 2022. We also pledged to increase the representation of women among NPower’s teaching staff across the U.S.—in cities like New York, NY; Dallas, TX; Baltimore, MD; and St. Louis, MO—to 40 percent by 2020.

the industry and feel an overwhelming sense of isolation in the workplace, often because they are one of few or the only. We’ve also learned that women of color face enormous pressure and responsibilities to their families, limiting their career outlook in tech.

This is why it’s so important for us at NPower to empower women of color in the tech sector. And we are thrilled to have an aligned partnership with GLF, who also shares our mission to support minority communities. 40x22 - Helping Women of Color Advance their Careers Through our “40 by 22” initiative, we’ve learned a great deal about the obstacles young women of color struggle with in tech. For instance, we’ve gained insight on how women lack role models in

Together, we’re committed to, inspired by, and advocate for women of color in the tech sector, whether they’re pursuing a new career in the industry or working to advance their current career. Ultimately, our goal is to help create a future in the tech sector that cultivates talent and creativity across all demographic groups. Bertina Ceccarelli joined NPower as CEO in May 2016. NPower is a national nonprofit dedicated to creating pathways to economic prosperity by launching digital careers for military veterans and young adults from underserved communities. Ceccarelli is an engineer by training and began her career in technology as a systems analyst for Procter &amp; Gamble before moving into sales and marketing for the company. She holds an M.B.A. from Harvard University and a B.S. in industrial engineering and operations research from the University of California at Berkeley. S

US Black Engineer & IT Volume 43 Number 3

US Black Engineer and Information Technology is published by Career Communications Group, Inc. (CCG). CCG is dedicated to celebrating diversity and promoting equal opportunity for minorities and women in the fields of engineering, science, and information technology. 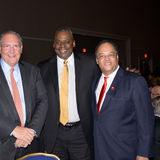