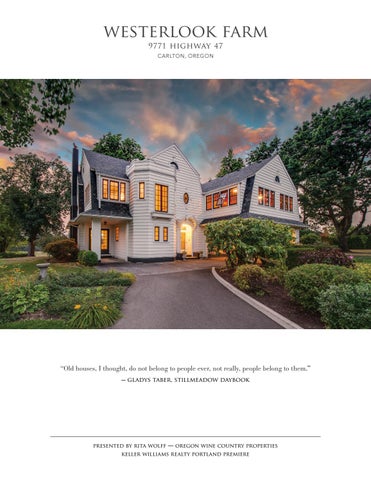 “Old houses, I thought, do not belong to people ever, not really, people belong to them.” — gladys taber, stillmeadow daybook

A UNIQUE AND STORYBOOK ESTATE, with more than a century

of history, Westerlook is a property like no other­—in a location like no other. Within a breathtaking 46 acres in the Willamette Valley, abutting the north fork of the Yamhill River, surrounded by more than a score of wineries and vineyards, you’ll find a home designed by renown Massachusetts and Portland architect Ellis Fuller Lawrence in 1911. A gated entrance opens to reveal a wraparound driveway leading to the main house. As you enter the main residence, you’ll pass through a gorgeous formal entryway that sets the elegant mood of the rest of the 6,487 square foot building. You’ll immediately notice the exquisite craftsmanship—lovingly maintained—and the thoughtful curation of period details throughout: from light fixtures and moldings to built-ins with leaded glass fronts. The hardwood-floored living room boasts a high ceiling, French doors leading outside, a welcoming wood-burning fireplace and a second set of French doors leading to an amazing brick-floored sunroom with a multi-paned stained-glass ceiling. The chandeliered dining room is perfect for entertaining parties large and small, has access to the sunroom, and a gas fireplace of its own. Further in, the large, eat-in kitchen is open and bright, and has an arched exposed brick wall that showcases top-of-the-line appliances. Granite countertops and backsplashes, white wood cabinetry, and a generously sized island with storage complete a kitchen that dreams are made of. The nearby dining nook has a bay window with a bench: a perfect place to sip coffee or tea and relish the morning.

bedrooms in the main house, as well as the family room, are on the upper level. The master suite has a gas fireplace, hardwood floors, and an adjoining master bathroom with a freestanding Victoria Albert Bathtub. Light and airy, a second bedroom suite has French doors that lead to a balcony and an adjoining bathroom as well. The third and fourth bedroom share a hall bathroom and happy views of Westerlook and beyond. Westerlook’s main house is simply stunning—and yet there’s so much more. The estate includes several outbuildings: a detached and oversized three car garage, a carriage house (complete with a yoga room), and an amazing three-bedroom guest house. All told, there’s 10,352 square feet of total living area at Westerlook. There are also three barns (for sheep, horses, and cows) on the property— as well as three greenhouses. There are two fruit orchards—growing apples and pears. Westerlook is a heavenly paradise with endless possibilities. New owners could welcome guests eager to visit Oregon’s wine country with tasting rooms or even exclusive accommodations. The estate would be a perfect backdrop for very special events and occasions—or even private, exclusive getaways. Whatever your dreams or ideas might be, Westerlook might very likely be the perfect canvas. After all, Westerlook calls to dreamers; whispers to the hearts of future stewards in an intimate voice that touches kindred souls and welcomes them home. From the moment you arrive, you know that the connections you feel— to the land, the history, the way of life, and the endless possibilities here—are simultaneously magical and true. And that might be when you realize that your presence in this moment, at the edge of this opportunity, is no accident or coincidence. Because sometimes a place chooses you, too.

“There’s a magical tie to the land of our home, which the heart cannot break, though the footsteps may roam.” – eliza cook

In 1995, Peter and Marilyn Shultz took on the mantle of stewards, and have been caring for Westerlook ever since. The Shultz family, like many of their predecessors, are stalwart members of the Carlton community and dedicated caretakers of the estate and its history. Peter and Marilyn Shultz, and their middle-school aged son Birl, came to Westerlook by way of California—and Massachusetts, where they regularly spent “too short” vacations at their family farm in Cummington. During a wide search for a home that could accommodate their dreams of a small farm lifestyle, it was Peter’s brother Alex that suggested Oregon, describing it as “as lovely as Massachusetts, but with less snow.” That was enough of a catalyst to add Oregon to the quest—though the Shultzes’ weren’t yet convinced that what they were looking for would even exist there, much less be available. Westerlook came on the market one week after their scouting trip. Initially, neither Peter nor Marilyn’s parents were enthusiastic about the idea of the family taking on a place the size of Westerlook. Warnings about how much work it would be were plentiful. When Peter’s father saw Westerlook for himself, however, he understood the appeal and attraction. Family and friends who would later come to visit always remarked, “Now we know why you came here!”

“This place wasn’t real. It just kind of invites you in. It all seems timed to happen at just the right moment.” – peter shultz

Peter and Marilyn entered into the Carlton community with enthusiasm, gentleness, and respect; finding ways to fit in wherever they could.

“The unspoken rule is: just become part of the community, then your talents will be called into use.” Peter collaborated with Country Public Transite to help create the town’s bus transit system, established a community volunteer driving program, and worked to re-establish “Fun Days,” the annual town celebration established in 1948 that had fallen by the wayside. Marilyn immediately became active in the schools, and flourished, supporting pre-school “story time” programs and events, as well as the local 4H Club. Young Birl was an avid tractor enthusiast and thrived at Westerlook. Together, he and Marilyn became interested in raising lambs—particularly “bummer” lambs; orphans whose mothers have died giving birth or shortly thereafter and are rejected by other mothers. During their first winter at Westerlook, Birl was given such a lamb to care for—Hampton—and Marilyn created a pen in Birl’s bedroom to accommodate the frequent care and hand-feeding required. As Hampton graduated to barn living, a second bummer lamb—Sheba—enjoyed Birl’s in-home attention and care.

“We made more friends here in Carlton in a very short time than we did in Portola Valley, California in years,” said Peter. “Work hard, develop the community—that’s what it’s all about here—schools and various community endeavors an what bring people together here.” During the Shultzes’ tenure, Westerlook has become a favored meeting place for many community service meetings, fund-raisers, parties, and happy gatherings of friends both new and old. During Carlton’s centennial celebration in 1999, the Shultzes’ were actively involved—organizing a well-appreciated “museum for a day” project that involved many people who knew the local area history and were eager to share. Marilyn held a gala community celebration complete with a suffragette’s parade. Peter and Marilyn have become—and always will be—part of Westerlook’s ongoing legacy of stewards that fell in love with the land, the lifestyle, and a compassionate, caring community of friends that in many ways have become like family. And now, the next chapter in the Westerlook story is about to begin.

â&#x20AC;&#x153;From animal husbandry to dairy, poultry, fruit and tree farming to horticultural and gardening interests, to civic-minded activities for the elite of the times, Westerlook has been a hive of human industry and social, civic interests, all marked by some overarching spirit of collective importance through individual efforts.â&#x20AC;? â&#x20AC;&#x201C; lenora ferro

falling in love with the land. Each family brought both a respect and appreciation for the work of their predecessors, as well as an enthusiasm to leave their own marks and memories during their tenures. From the Tuality Indians, the first inhabitants of the area, and the new pioneers that eventually founded nearby Carlton, Oregon to Peter and Marilyn Shultz, the most recent stewards of Westerlook, there have been many hearts and hands contributing to this magical place. In fact, there is a detailed, anecdotally-rich history of Westerlook that was compiled by former owner Christina Linke in the 1980s that has been passed forward to each new owner. What follows is a very brief summary that offers a birds-eye view of Westerlook’s many stewards—all of whom were exceptional and inspirational. Around 1840, James Ramage first registered the land that would become Westerlook, passing it on to his wife Sarah, and then their son, John in 1865. It’s exciting to note that James Ramage’s original land claim was signed by President Abraham Lincoln. John Ramage then sold the property to John and Diana Fryer in 1866. Their daughter Angie, married to James Edson, inherited it from them in 1892. By 1896, F.M. and Martha York had purchased the land. On March 13, 1911, Charles and Sarah Ladd arrived and registered the property as Westerlook Farm—and commissioned architect Ellis Fuller Lawrence to design their home. Charles Ladd, one of five children from the already prominent Ladd family in Portland, had partnered with Charles Tilton to open Ladd & Tilton Banking House, an endeavor that added to his family’s prestige and success. Sarah Ladd helped to organize the Carlton Civic Improvement Society to manage a number of projects, including the founding of the Carlton Library.

In 1920, Charles Ladd died of complications from Bright’s Disease, and by 1923, Sarah sold the farm to W.B. and May Beebe. The Beebe family owned a shipbuilding company— and while they entertained extensively at Westerlook—lived primarily in Portland. It was during the Beebe tenure that the sunroom and additional bedrooms were added in the main house. Greenhouses were also added to the property. A.E. and Ethel Otis came to Westerlook in 1930 and added the chicken house and dairy barn. By 1944 they had conveyed Westerlook to John and Orbin Beall—both very involved in Carlton civic activities. They were originally from Texas and were perhaps eager to return: they sold Westerlook to E.J. and Christina Linke in 1947. The Linkes’ were deeply involved in the local community and were noted for their generosity. They built the horse barn at Westerlook for their daughter, they also built the guest house, and undertook many improvements and countless enhancements to the estate over the next 36 years. In 1983, Westerlook was looked after by Monica Willis—who orchestrated extensive remodeling of the property including enlarging and updating the kitchen—and in 1989 by Michael Sheehan: whose sister discovered an antique diamond ring while she was tiling the soil in the garden. Its origins remain a mystery. In 1995, Peter and Marilyn Shultz took on the mantle of stewards, and have been caring for Westerlook ever since. The Shultz family, like many of their predecessors, are stalwart members of the Carlton community and dedicated caretakers of the estate and its history.

and the story continues...

Licensed in the State of Oregon. Each office is independently owned and operated.