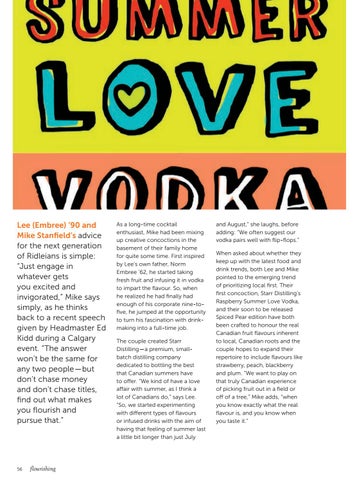 Lee (Embree) ’90 and Mike Stanfield’s advice for the next generation of Ridleians is simple: “Just engage in whatever gets you excited and invigorated,” Mike says simply, as he thinks back to a recent speech given by Headmaster Ed Kidd during a Calgary event. “The answer won’t be the same for any two people—but don’t chase money and don’t chase titles, find out what makes you flourish and pursue that.”

As a long-time cocktail enthusiast, Mike had been mixing up creative concoctions in the basement of their family home for quite some time. First inspired by Lee’s own father, Norm Embree ’62, he started taking fresh fruit and infusing it in vodka to impart the flavour. So, when he realized he had finally had enough of his corporate nine-tofive, he jumped at the opportunity to turn his fascination with drinkmaking into a full-time job. The couple created Starr Distilling—a premium, smallbatch distilling company dedicated to bottling the best that Canadian summers have to offer. “We kind of have a love affair with summer, as I think a lot of Canadians do,” says Lee. “So, we started experimenting with different types of flavours or infused drinks with the aim of having that feeling of summer last a little bit longer than just July

and August,” she laughs, before adding: “We often suggest our vodka pairs well with flip-flops.” When asked about whether they keep up with the latest food and drink trends, both Lee and Mike pointed to the emerging trend of prioritizing local first. Their first concoction, Starr Distilling’s Raspberry Summer Love Vodka, and their soon to be released Spiced Pear edition have both been crafted to honour the real Canadian fruit flavours inherent to local, Canadian roots and the couple hopes to expand their repertoire to include flavours like strawberry, peach, blackberry and plum. “We want to play on that truly Canadian experience of picking fruit out in a field or off of a tree,” Mike adds, “when you know exactly what the real flavour is, and you know when you taste it.” 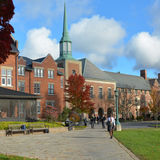