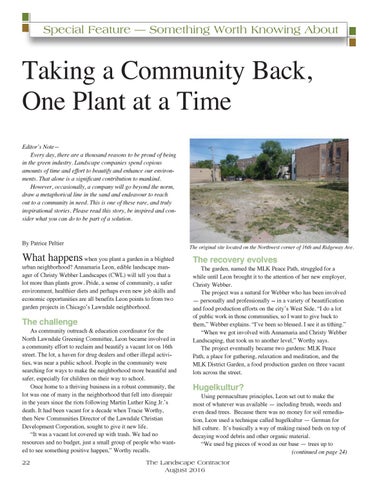 Special Feature — Something Worth Knowing About

Taking a Community Back, One Plant at a Time Editor’s Note— Every day, there are a thousand reasons to be proud of being in the green industry. Landscape companies spend copious amounts of time and effort to beautify and enhance our environments. That alone is a significant contribution to mankind. However, occasionally, a company will go beyond the norm, draw a metaphorical line in the sand and endeavour to reach out to a community in need. This is one of these rare, and truly inspirational stories. Please read this story, be inspired and consider what you can do to be part of a solution. By Patrice Peltier

What happens when you plant a garden in a blighted

urban neighborhood? Annamaria Leon, edible landscape manager of Christy Webber Landscapes (CWL) will tell you that a lot more than plants grow. Pride, a sense of community, a safer environment, healthier diets and perhaps even new job skills and economic opportunities are all benefits Leon points to from two garden projects in Chicago’s Lawndale neighborhood.

As community outreach & education coordinator for the North Lawndale Greening Committee, Leon became involved in a community effort to reclaim and beautify a vacant lot on 16th street. The lot, a haven for drug dealers and other illegal activities, was near a public school. People in the community were searching for ways to make the neighborhood more beautiful and safer, especially for children on their way to school. Once home to a thriving business in a robust community, the lot was one of many in the neighborhood that fell into disrepair in the years since the riots following Martin Luther King Jr.’s death. It had been vacant for a decade when Tracie Worthy, then New Communities Director of the Lawndale Christian Development Corporation, sought to give it new life. “It was a vacant lot covered up with trash. We had no resources and no budget, just a small group of people who wanted to see something positive happen,” Worthy recalls. 22

The original site located on the Northwest corner of 16th and Ridgeway Ave.

The garden, named the MLK Peace Path, struggled for a while until Leon brought it to the attention of her new employer, Christy Webber. The project was a natural for Webber who has been involved — personally and professionally -- in a variety of beautification and food production efforts on the city’s West Side. “I do a lot of public work in those communities, so I want to give back to them,” Webber explains. “I’ve been so blessed. I see it as tithing.” “When we got involved with Annamaria and Christy Webber Landscaping, that took us to another level,” Worthy says. The project eventually became two gardens: MLK Peace Path, a place for gathering, relaxation and meditation, and the MLK District Garden, a food production garden on three vacant lots across the street.

Using permaculture principles, Leon set out to make the most of whatever was available — including brush, weeds and even dead trees. Because there was no money for soil remediation, Leon used a technique called hugelkultur — German for hill culture. It’s basically a way of making raised beds on top of decaying wood debris and other organic material. “We used big pieces of wood as our base — trees up to (continued on page 24) 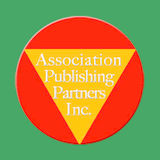