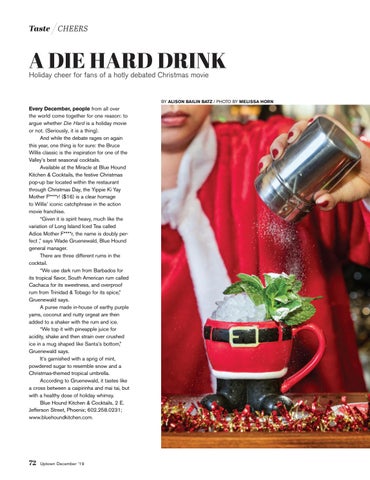 Every December, people from all over the world come together for one reason: to argue whether Die Hard is a holiday movie or not. (Seriously, it is a thing). And while the debate rages on again this year, one thing is for sure: the Bruce Willis classic is the inspiration for one of the Valley’s best seasonal cocktails. Available at the Miracle at Blue Hound Kitchen &amp; Cocktails, the festive Christmas pop-up bar located within the restaurant through Christmas Day, the Yippie Ki Yay Mother F****r! ($16) is a clear homage to Willis’ iconic catchphrase in the action movie franchise. “Given it is spirit heavy, much like the variation of Long Island Iced Tea called Adios Mother F****r, the name is doubly perfect ,” says Wade Gruenewald, Blue Hound general manager. There are three different rums in the cocktail. “We use dark rum from Barbados for its tropical flavor, South American rum called Cachaca for its sweetness, and overproof rum from Trinidad &amp; Tobago for its spice,” Gruenewald says. A puree made in-house of earthy purple yams, coconut and nutty orgeat are then added to a shaker with the rum and ice. “We top it with pineapple juice for acidity, shake and then strain over crushed ice in a mug shaped like Santa’s bottom,” Gruenewald says. It’s garnished with a sprig of mint, powdered sugar to resemble snow and a Christmas-themed tropical umbrella. According to Gruenewald, it tastes like a cross between a caipirinha and mai tai, but with a healthy dose of holiday whimsy. Blue Hound Kitchen &amp; Cocktails, 2 E. Jefferson Street, Phoenix; 602.258.0231; www.bluehoundkitchen.com.