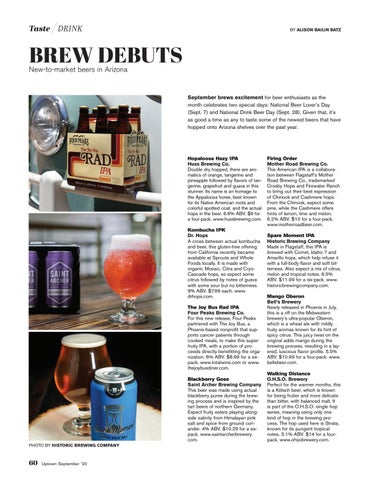 September brews excitement for beer enthusiasts as the month celebrates two special days: National Beer Lover’s Day (Sept. 7) and National Drink Beer Day (Sept. 28). Given that, it’s as good a time as any to taste some of the newest beers that have hopped onto Arizona shelves over the past year.

Hopaloosa Hazy IPA Huss Brewing Co. Double dry hopped, there are aromatics of orange, tangerine and pineapple followed by flavors of tangerine, grapefruit and guava in this stunner. Its name is an homage to the Appaloosa horse, best known for its Native American roots and colorful spotted coat, and the actual hops in the beer. 6.6% ABV. $9 for a four-pack. www.hussbrewing.com. Kombucha IPK Dr. Hops A cross between actual kombucha and beer, this gluten-free offering from California recently became available at Sprouts and Whole Foods locally. It is made with organic Mosaic, Citra and CryoCascade hops, so expect some citrus followed by notes of guava with some sour but no bitterness. 9% ABV. $7.99 each. www. drhops.com. The Joy Bus Rad IPA Four Peaks Brewing Co. For this new release, Four Peaks partnered with The Joy Bus, a Phoenix-based nonprofit that supports cancer patients through cooked meals, to make this superfruity IPA, with a portion of proceeds directly benefitting the organization. 6% ABV. $8.99 for a sixpack. www.totalwine.com or www. thejoybusdiner.com. Blackberry Gose Saint Archer Brewing Company This beer was made using actual blackberry puree during the brewing process and is inspired by the tart beers of northern Germany. Expect fruity esters playing alongside salinity from Himalayan pink salt and spice from ground coriander. 4% ABV. $10.29 for a sixpack. www.saintarcherbrewery. com. PHOTO BY HISTORIC BREWING COMPANY

Firing Order Mother Road Brewing Co. This American IPA is a collaboration between Flagstaff’s Mother Road Brewing Co., trademarked Crosby Hops and Firewater Ranch to bring out their best expression of Chinook and Cashmere hops. From the Chinook, expect some pine, while the Cashmere offers hints of lemon, lime and melon. 6.2% ABV. $10 for a four-pack. www.motherroadbeer.com. Spare Moment IPA Historic Brewing Company Made in Flagstaff, this IPA is brewed with Comet, Idaho 7 and Amarillo hops, which help infuse it with a full-body flavor and soft bitterness. Also expect a mix of citrus, melon and tropical notes. 6.5% ABV. $11.99 for a six-pack. www. historicbrewingcompany.com. Mango Oberon Bell’s Brewery Newly released in Phoenix in July, this is a riff on the Midwestern brewery’s ultra-popular Oberon, which is a wheat ale with mildly fruity aromas known for its hint of spicy citrus. This juicy twist on the original adds mango during the brewing process, resulting in a layered, luscious flavor profile. 5.5% ABV. $10.99 for a four-pack. www. bellsbeer.com. Walking Distance O.H.S.O. Brewery Perfect for the warmer months, this is a Kölsch beer, which is known for being frutier and more delicate than bitter, with balanced malt. It is part of the O.H.S.O. single hop series, meaning using only one kind of hop in the brewing process. The hop used here is Strata, known for its pungent tropical notes. 5.1% ABV. $14 for a fourpack. www.ohsobrewery.com.