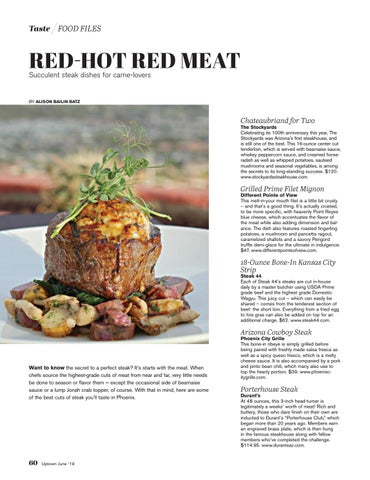 The Stockyards Celebrating its 100th anniversary this year, The Stockyards was Arizona’s first steakhouse, and is still one of the best. This 16-ounce center cut tenderloin, which is served with bearnaise sauce, whiskey peppercorn sauce, and creamed horseradish as well as whipped potatoes, sauteed mushrooms and seasonal vegetables, is among the secrets to its long-standing success. $120. www.stockyardssteakhouse.com.

Different Pointe of View This melt-in-your mouth filet is a little bit crusty – and that’s a good thing. It’s actually crusted, to be more specific, with heavenly Point Reyes blue cheese, which accentuates the flavor of the meat while also adding dimension and balance. The dish also features roasted fingerling potatoes, a mushroom and pancetta ragout, caramelized shallots and a savory Perigord truffle demi-glace for the ultimate in indulgence. $47. www.differentpointeofview.com.

Steak 44 Each of Steak 44’s steaks are cut in-house daily by a master butcher using USDA Prime grade beef and the highest grade Domestic Wagyu. This juicy cut – which can easily be shared – comes from the tenderest section of beef: the short loin. Everything from a fried egg to fois gras can also be added on top for an additional charge. $62. www.steak44.com.

Want to know the secret to a perfect steak? It’s starts with the meat. When chefs source the highest-grade cuts of meat from near and far, very little needs be done to season or flavor them — except the occasional side of bearnaise sauce or a lump Jonah crab topper, of course. With that in mind, here are some of the best cuts of steak you’ll taste in Phoenix.

Phoenix City Grille This bone-in ribeye is simply grilled before being paired with freshly made salsa fresca as well as a spicy queso fresco, which is a melty cheese sauce. It is also accompanied by a pork and pinto bean chili, which many also use to top the hearty portion. $39. www.phoenixcitygrille.com.

Durant’s At 48 ounces, this 3-inch head-turner is legitimately a weeks’ worth of meat! Rich and buttery, those who dare finish on their own are inducted to Durant’s “Porterhouse Club,” which began more than 20 years ago. Members earn an engraved brass plate, which is then hung in the famous steakhouse along with fellow members who’ve completed the challenge. $114.95. www.durantsaz.com.