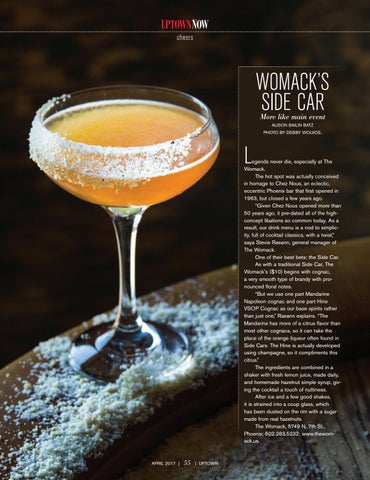 egends never die, especially at The Womack. The hot spot was actually conceived in homage to Chez Nous, an eclectic, eccentric Phoenix bar that first opened in 1963, but closed a few years ago. “Given Chez Nous opened more than 50 years ago, it pre-dated all of the highconcept libations so common today. As a result, our drink menu is a nod to simplicity, full of cocktail classics, with a twist,” saya Stevie Raeann, general manager of The Womack. One of their best bets: the Side Car. As with a traditional Side Car, The Womack’s ($10) begins with cognac, a very smooth type of brandy with pronounced floral notes. “But we use one part Mandarine Napoleon cognac and one part Hine VSOP Cognac as our base spirits rather than just one,” Raeann explains. “The Mandarine has more of a citrus flavor than most other cognacs, so it can take the place of the orange liqueur often found in Side Cars. The Hine is actually developed using champagne, so it compliments this citrus.” The ingredients are combined in a shaker with fresh lemon juice, made daily, and homemade hazelnut simple syrup, giving the cocktail a touch of nuttiness. After ice and a few good shakes, it is strained into a coup glass, which has been dusted on the rim with a sugar made from real hazelnuts. The Womack, 5749 N. 7th St., Phoenix; 602.283.5232; www.thewomack.us.