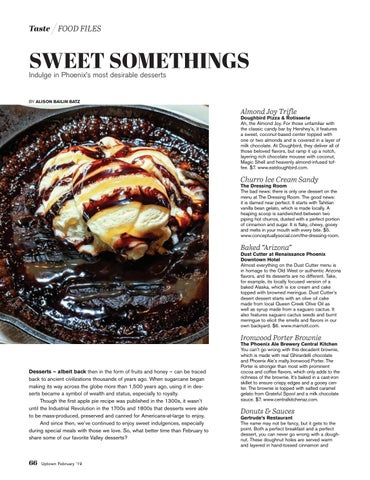 Doughbird Pizza &amp; Rotisserie Ah, the Almond Joy. For those unfamiliar with the classic candy bar by Hershey’s, it features a sweet, coconut-based center topped with one or two almonds and is covered in a layer of milk chocolate. At Doughbird, they deliver all of those beloved flavors, but ramp it up a notch, layering rich chocolate mousse with coconut, Magic Shell and heavenly almond-infused toffee. $7. www.eatdoughbird.com.

The Dressing Room The bad news: there is only one dessert on the menu at The Dressing Room. The good news: it is darned near perfect. It starts with Tahitian vanilla bean gelato, which is made locally. A heaping scoop is sandwiched between two piping hot churros, dusted with a perfect portion of cinnamon and sugar. It is flaky, chewy, gooey and melts in your mouth with every bite. $5. www.conceptuallysocial.com/the-dressing-room.

Dust Cutter at Renaissance Phoenix Downtown Hotel Almost everything on the Dust Cutter menu is in homage to the Old West or authentic Arizona flavors, and its desserts are no different. Take, for example, its locally focused version of a baked Alaska, which is ice cream and cake topped with browned meringue. Dust Cutter’s desert dessert starts with an olive oil cake made from local Queen Creek Olive Oil as well as syrup made from a saguaro cactus. It also features saguaro cactus seeds and burnt meringue to elicit the smells and flavors in our own backyard. $6. www.marriott.com.

Desserts – albeit back then in the form of fruits and honey – can be traced back to ancient civilizations thousands of years ago. When sugarcane began making its way across the globe more than 1,500 years ago, using it in desserts became a symbol of wealth and status, especially to royalty. Though the first apple pie recipe was published in the 1300s, it wasn’t until the Industrial Revolution in the 1700s and 1800s that desserts were able to be mass-produced, preserved and canned for Americans-at-large to enjoy. And since then, we’ve continued to enjoy sweet indulgences, especially during special meals with those we love. So, what better time than February to share some of our favorite Valley desserts?

The Phoenix Ale Brewery Central Kitchen You can’t go wrong with this decadent brownie, which is made with real Ghirardelli chocolate and Phoenix Ale’s malty Ironwood Porter. The Porter is stronger than most with prominent cocoa and coffee flavors, which only adds to the richness of the brownie. It’s baked in a cast-iron skillet to ensure crispy edges and a gooey center. The brownie is topped with salted caramel gelato from Grateful Spool and a milk chocolate sauce. $7. www.centralkitchenaz.com.

Gertrude’s Restaurant The name may not be fancy, but it gets to the point. Both a perfect breakfast and a perfect dessert, you can never go wrong with a doughnut. These doughnut holes are served warm and layered in hand-tossed cinnamon and