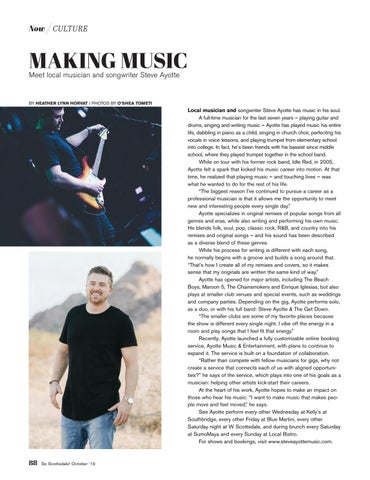 Local musician and songwriter Steve Ayotte has music in his soul. A full-time musician for the last seven years – playing guitar and drums, singing and writing music – Ayotte has played music his entire life, dabbling in piano as a child, singing in church choir, perfecting his vocals in voice lessons, and playing trumpet from elementary school into college. In fact, he’s been friends with his bassist since middle school, where they played trumpet together in the school band. While on tour with his former rock band, Idle Red, in 2005, Ayotte felt a spark that kicked his music career into motion. At that time, he realized that playing music – and touching lives – was what he wanted to do for the rest of his life. “The biggest reason I’ve continued to pursue a career as a professional musician is that it allows me the opportunity to meet new and interesting people every single day.” Ayotte specializes in original remixes of popular songs from all genres and eras, while also writing and performing his own music. He blends folk, soul, pop, classic rock, R&amp;B, and country into his remixes and original songs – and his sound has been described as a diverse blend of these genres. While his process for writing is different with each song, he normally begins with a groove and builds a song around that. “That’s how I create all of my remixes and covers, so it makes sense that my originals are written the same kind of way.” Ayotte has opened for major artists, including The Beach Boys, Maroon 5, The Chainsmokers and Enrique Iglesias, but also plays at smaller club venues and special events, such as weddings and company parties. Depending on the gig, Ayotte performs solo, as a duo, or with his full band: Steve Ayotte &amp; The Get Down. “The smaller clubs are some of my favorite places because the show is different every single night. I vibe off the energy in a room and play songs that I feel fit that energy.” Recently, Ayotte launched a fully customizable online booking service, Ayotte Music &amp; Entertainment, with plans to continue to expand it. The service is built on a foundation of collaboration. “Rather than compete with fellow musicians for gigs, why not create a service that connects each of us with aligned opportunities?” he says of the service, which plays into one of his goals as a musician: helping other artists kick-start their careers. At the heart of his work, Ayotte hopes to make an impact on those who hear his music. “I want to make music that makes people move and feel moved,” he says. See Ayotte perform every other Wednesday at Kelly’s at Southbridge, every other Friday at Blue Martini, every other Saturday night at W Scottsdale, and during brunch every Saturday at SumoMaya and every Sunday at Local Bistro. For shows and bookings, visit www.steveayottemusic.com.