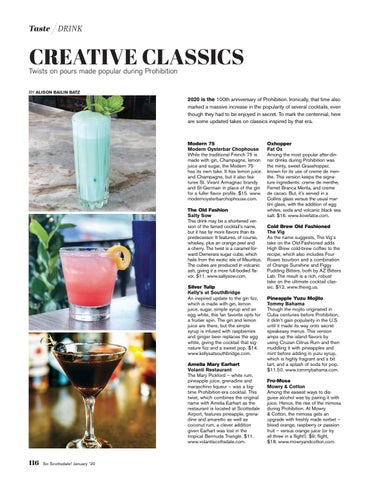 2020 is the 100th anniversary of Prohibition. Ironically, that time also marked a massive increase in the popularity of several cocktails, even though they had to be enjoyed in secret. To mark the centennial, here are some updated takes on classics inspired by that era.

Modern 75 Modern Oysterbar Chophouse While the traditional French 75 is made with gin, Champagne, lemon juice and sugar, the Modern 75 has its own take. It has lemon juice and Champagne, but it also features St. Vivant Armagnac brandy and St-Germain in place of the gin for a fuller flavor profile. $15. www. modernoysterbarchophouse.com. The Old Fashion Salty Sow This drink may be a shortened version of the famed cocktail’s name, but it has far more flavors than its predecessor. It features, of course, whiskey, plus an orange peel and a cherry. The twist is a caramel-forward Demerara sugar cube, which hails from the exotic isle of Mauritius. The cubes are produced in volcanic ash, giving it a more full-bodied flavor. $11. www.saltysow.com. Silver Tulip Kelly’s at SouthBridge An inspired update to the gin fizz, which is made with gin, lemon juice, sugar, simple syrup and an egg white, this fan favorite opts for a fruitier spin. The gin and lemon juice are there, but the simple syrup is infused with raspberries and ginger beer replaces the egg white, giving the cocktail that signature fizz and a sweet pop. $14. www.kellysatsouthbridge.com. Amelia Mary Earhart Volanti Restaurant The Mary Pickford – white rum, pineapple juice, grenadine and maraschino liqueur – was a bigtime Prohibition-era cocktail. This twist, which combines the original name with Amelia Earhart as the restaurant is located at Scottsdale Airport, features pineapple, grenadine and amaretto as well as coconut rum, a clever addition given Earhart was lost in the tropical Bermuda Triangle. $11. www.volantiscottsdale.com.

Oxhopper Fat Ox Among the most popular after-dinner drinks during Prohibition was the minty, sweet Grasshopper, known for its use of creme de menthe. This version keeps the signature ingredients: creme de menthe, Fernet Branca Menta, and creme de cacao. But, it’s served in a Collins glass versus the usual martini glass, with the addition of egg whites, soda and volcanic black sea salt. $16. www.ilovefatox.com. Cold Brew Old Fashioned The Vig As the name suggests, The Vig’s take on the Old-Fashioned adds High Brew cold-brew coffee to the recipe, which also includes Four Roses bourbon and a combination of Orange Sunshine and Figgy Pudding Bitters, both by AZ Bitters Lab. The result is a rich, robust take on the ultimate cocktail classic. $12. www.thevig.us. Pineapple Yuzu Mojito Tommy Bahama Though the mojito originated in Cuba centuries before Prohibition, it didn’t gain popularity in the U.S. until it made its way onto secret speakeasy menus. This version amps up the island flavors by using Cruzan Citrus Rum and then muddling it with pineapples and mint before adding in yuzu syrup, which is highly fragrant and a bit tart, and a splash of soda for pop. $11.50. www.tommybahama.com. Fro-Mosa Mowry &amp; Cotton Among the easiest ways to disguise alcohol was by pairing it with juice. Hence, the rise of the mimosa during Prohibition. At Mowry &amp; Cotton, the mimosa gets an upgrade with freshly made sorbet – blood orange, raspberry or passion fruit – versus orange juice (or try all three in a flight!). $9; flight, $18. www.mowryandcotton.com.