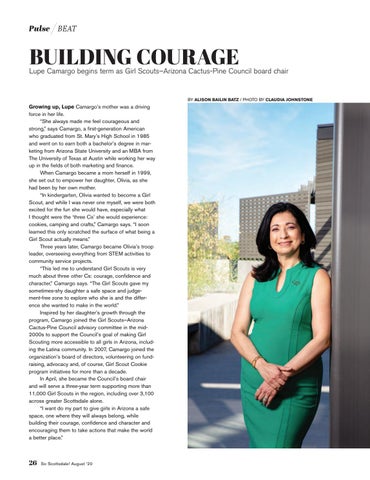 Growing up, Lupe Camargo’s mother was a driving force in her life. “She always made me feel courageous and strong,” says Camargo, a first-generation American who graduated from St. Mary’s High School in 1985 and went on to earn both a bachelor’s degree in marketing from Arizona State University and an MBA from The University of Texas at Austin while working her way up in the fields of both marketing and finance. When Camargo became a mom herself in 1999, she set out to empower her daughter, Olivia, as she had been by her own mother. “In kindergarten, Olivia wanted to become a Girl Scout, and while I was never one myself, we were both excited for the fun she would have, especially what I thought were the ‘three Cs’ she would experience: cookies, camping and crafts,” Camargo says. “I soon learned this only scratched the surface of what being a Girl Scout actually means.” Three years later, Camargo became Olivia’s troop leader, overseeing everything from STEM activities to community service projects. “This led me to understand Girl Scouts is very much about three other Cs: courage, confidence and character,” Camargo says. “The Girl Scouts gave my sometimes-shy daughter a safe space and judgement-free zone to explore who she is and the difference she wanted to make in the world.” Inspired by her daughter’s growth through the program, Camargo joined the Girl Scouts–Arizona Cactus-Pine Council advisory committee in the mid2000s to support the Council’s goal of making Girl Scouting more accessible to all girls in Arizona, including the Latina community. In 2007, Camargo joined the organization’s board of directors, volunteering on fundraising, advocacy and, of course, Girl Scout Cookie program initiatives for more than a decade. In April, she became the Council’s board chair and will serve a three-year term supporting more than 11,000 Girl Scouts in the region, including over 3,100 across greater Scottsdale alone. “I want do my part to give girls in Arizona a safe space, one where they will always belong, while building their courage, confidence and character and encouraging them to take actions that make the world a better place.”