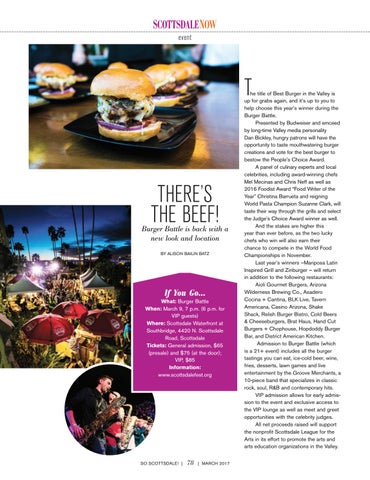 he title of Best Burger in the Valley is up for grabs again, and it’s up to you to help choose this year’s winner during the Burger Battle. Presented by Budweiser and emceed by long-time Valley media personality Dan Bickley, hungry patrons will have the opportunity to taste mouthwatering burger creations and vote for the best burger to bestow the People’s Choice Award. A panel of culinary experts and local celebrities, including award-winning chefs Mel Mecinas and Chris Neff as well as 2016 Foodist Award “Food Writer of the Year” Christina Barrueta and reigning World Pasta Champion Suzanne Clark, will taste their way through the grills and select the Judge’s Choice Award winner as well. And the stakes are higher this year than ever before, as the two lucky chefs who win will also earn their chance to compete in the World Food Championships in November. Last year’s winners –Mariposa Latin Inspired Grill and Zinburger – will return in addition to the following restaurants: Aioli Gourmet Burgers, Arizona Wilderness Brewing Co., Asadero Cocina + Cantina, BLK Live, Tavern Americana, Casino Arizona, Shake Shack, Relish Burger Bistro, Cold Beers & Cheeseburgers, Brat Haus, Hand Cut Burgers + Chophouse, Hopdoddy Burger Bar, and District American Kitchen. Admission to Burger Battle (which is a 21+ event) includes all the burger tastings you can eat, ice-cold beer, wine, fries, desserts, lawn games and live entertainment by the Groove Merchants, a 10-piece band that specializes in classic rock, soul, R&B and contemporary hits.  VIP admission allows for early admission to the event and exclusive access to the VIP lounge as well as meet and greet opportunities with the celebrity judges. All net proceeds raised will support the nonprofit Scottsdale League for the Arts in its effort to promote the arts and arts education organizations in the Valley.