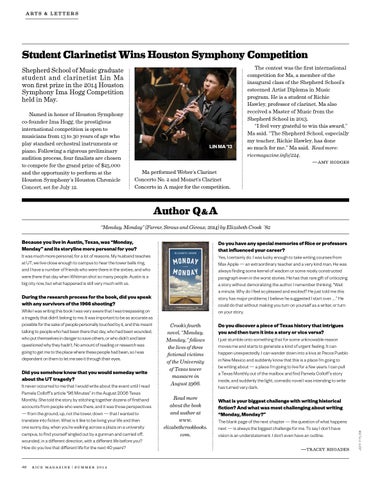 Student Clarinetist Wins Houston Symphony Competition Shepherd School of Music graduate student and clarinetist Lin Ma won first prize in the 2014 Houston Symphony Ima Hogg Competition held in May. Named in honor of Houston Symphony co-founder Ima Hogg, the prestigious international competition is open to musicians from 13 to 30 years of age who play standard orchestral instruments or piano. Following a rigorous preliminary audition process, four finalists are chosen to compete for the grand prize of $25,000 and the opportunity to perform at the Houston Symphony’s Houston Chronicle Concert, set for July 12.

Because you live in Austin, Texas, was “Monday, Monday” and its storyline more personal for you?

Do you have any special memories of Rice or professors that influenced your career?

It was much more personal, for a lot of reasons. My husband teaches at UT, we live close enough to campus to hear the tower bells ring, and I have a number of friends who were there in the sixties, and who were there that day when Whitman shot so many people. Austin is a big city now, but what happened is still very much with us.

Yes, I certainly do. I was lucky enough to take writing courses from Max Apple — an extraordinary teacher and a very kind man. He was always finding some kernel of wisdom or some nicely constructed paragraph even in the worst stories. He has that rare gift of criticizing a story without demoralizing the author. I remember thinking, “Wait a minute. Why do I feel so pleased and excited? He just told me this story has major problems; I believe he suggested I start over … .” He could do that without making you turn on yourself as a writer, or turn on your story.

While I was writing this book I was very aware that I was trespassing on a tragedy that didn’t belong to me. It was important to be as accurate as possible for the sake of people personally touched by it, and this meant talking to people who had been there that day, who had been wounded, who put themselves in danger to save others, or who didn’t and later questioned why they hadn’t. No amount of reading or research was going to get me to the place where these people had been, so I was dependent on them to let me see it through their eyes.

Did you somehow know that you would someday write about the UT tragedy? It never occurred to me that I would write about the event until I read Pamela Colloff’s article “96 Minutes” in the August 2006 Texas Monthly. She told the story by stitching together dozens of firsthand accounts from people who were there, and it was those perspectives — from the ground, up, not the tower, down — that I wanted to translate into fiction. What is it like to be living your life and then one sunny day, when you’re walking across a plaza on a university campus, to find yourself singled out by a gunman and carried off, wounded, in a different direction, with a different life before you? How do you live that different life for the next 40 years?

Crook’s fourth novel, “Monday, Monday,” follows the lives of three fictional victims of the University of Texas tower massacre in August 1966. Read more about the book and author at www. elizabethcrookbooks. com.

Do you discover a piece of Texas history that intrigues you and then turn it into a story or vice versa? I just stumble onto something that for some unknowable reason moves me and starts to generate a kind of urgent feeling. It can happen unexpectedly. I can wander down into a kiva at Pecos Pueblo in New Mexico and suddenly know that this is a place I’m going to be writing about — a place I’m going to live for a few years. I can pull a Texas Monthly out of the mailbox and find Pamela Colloff ’s story inside, and suddenly the light, comedic novel I was intending to write has turned very dark.

What is your biggest challenge with writing historical fiction? And what was most challenging about writing “Monday, Monday?” The blank page of the next chapter — the question of what happens next — is always the biggest challenge for me. To say I don’t have vision is an understatement. I don’t even have an outline.

During the research process for the book, did you speak with any survivors of the 1966 shooting?

The magazine of Rice University. SUMMERTIME While the campus welcomes hundreds of children for recreational camps and activities, the resident population of undergraduates has taken flight. Also: Rice School of Architecture preceptorship students 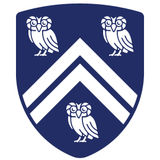