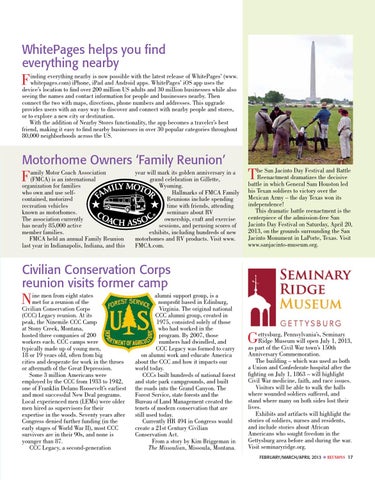 WhitePages helps you find everything nearby

inding everything nearby is now possible with the latest release of WhitePages’ (www. whitepages.com) iPhone, iPad and Android apps. WhitePages’ iOS app uses the device’s location to find over 200 million US adults and 30 million businesses while also seeing the names and contact information for people and businesses nearby. Then connect the two with maps, directions, phone numbers and addresses. This upgrade provides users with an easy way to discover and connect with nearby people and stores, or to explore a new city or destination. With the addition of Nearby Stores functionality, the app becomes a traveler’s best friend, making it easy to find nearby businesses in over 30 popular categories throughout 80,000 neighborhoods across the US.

amily Motor Coach Association (FMCA) is an international organization for families who own and use selfcontained, motorized recreation vehicles known as motorhomes. The association currently has nearly 85,000 active member families. FMCA held an annual Family Reunion last year in Indianapolis, Indiana, and this

year will mark its golden anniversary in a grand celebration in Gillette, Wyoming. Hallmarks of FMCA Family Reunions include spending time with friends, attending seminars about RV ownership, craft and exercise sessions, and perusing scores of exhibits, including hundreds of new motorhomes and RV products. Visit www. FMCA.com.

ine men from eight states met for a reunion of the Civilian Conservation Corps (CCC) Legacy reunion. At its peak, the Ninemile CCC Camp at Stony Creek, Montana, hosted three companies of 200 workers each. CCC camps were typically made up of young men, 18 or 19 years old, often from big cities and desperate for work in the throes or aftermath of the Great Depression. Some 3 million Americans were employed by the CCC from 1933 to 1942, one of Franklin Delano Roosevelt’s earliest and most successful New Deal programs. Local experienced men (LEMs) were older men hired as supervisors for their expertise in the woods. Seventy years after Congress denied further funding (in the early stages of World War II), most CCC survivors are in their 90s, and none is younger than 87. CCC Legacy, a second-generation

alumni support group, is a nonprofit based in Edinburg, Virginia. The original national CCC alumni group, created in 1975, consisted solely of those who had worked in the program. By 2007, those numbers had dwindled, and CCC Legacy was formed to carry on alumni work and educate America about the CCC and how it impacts our world today. CCCs built hundreds of national forest and state park campgrounds, and built the roads into the Grand Canyon. The Forest Service, state forests and the Bureau of Land Management created the tenets of modern conservation that are still used today. Currently HR 494 in Congress would create a 21st Century Civilian Conservation Act. From a story by Kim Briggeman in The Missoulian, Missoula, Montana.

ettysburg, Pennsylvania’s, Seminary Ridge Museum will open July 1, 2013, as part of the Civil War town’s 150th Anniversary Commemoration. The building – which was used as both a Union and Confederate hospital after the fighting on July 1, 1863 – will highlight Civil War medicine, faith, and race issues. Visitors will be able to walk the halls where wounded soldiers suffered, and stand where many on both sides lost their lives. Exhibits and artifacts will highlight the stories of soldiers, nurses and residents, and include stories about African Americans who sought freedom in the Gettysburg area before and during the war. Visit seminaryridge.org. FEBRUARY/MARCH/APRIL 2013 v Reunions 17 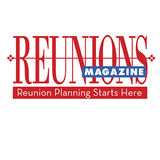