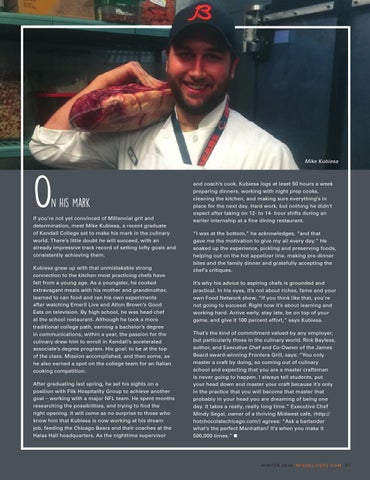 If you’re not yet convinced of Millennial grit and determination, meet Mike Kubiesa, a recent graduate of Kendall College set to make his mark in the culinary world. There’s little doubt he will succeed, with an already impressive track record of setting lofty goals and consistently achieving them. Kubiesa grew up with that unmistakable strong connection to the kitchen most practicing chefs have felt from a young age. As a youngster, he cooked extravagant meals with his mother and grandmother, learned to can food and ran his own experiments after watching Emeril Live and Alton Brown’s Good Eats on television. By high school, he was head chef at the school restaurant. Although he took a more traditional college path, earning a bachelor’s degree in communications, within a year, the passion for the culinary drew him to enroll in Kendall’s accelerated associate’s degree program. His goal: to be at the top of the class. Mission accomplished, and then some, as he also earned a spot on the college team for an Italian cooking competition. After graduating last spring, he set his sights on a position with Flik Hospitality Group to achieve another goal – working with a major NFL team. He spent months researching the possibilities, and trying to find the right opening. It will come as no surprise to those who know him that Kubiesa is now working at his dream job, feeding the Chicago Bears and their coaches at the Halas Hall headquarters. As the nighttime supervisor

and coach’s cook, Kubiesa logs at least 50 hours a week preparing dinners, working with night prep cooks, cleaning the kitchen, and making sure everything’s in place for the next day. Hard work, but nothing he didn’t expect after taking on 12- to 14- hour shifts during an earlier internship at a fine dining restaurant. “I was at the bottom,” he acknowledges, “and that gave me the motivation to give my all every day.” He soaked up the experience, pickling and preserving foods, helping out on the hot appetizer line, making pre-dinner bites and the family dinner and gratefully accepting the chef’s critiques. It’s why his advice to aspiring chefs is grounded and practical. In his eyes, it’s not about riches, fame and your own Food Network show. “If you think like that, you’re not going to succeed. Right now it’s about learning and working hard. Arrive early, stay late, be on top of your game, and give it 100 percent effort,” says Kubiesa. That’s the kind of commitment valued by any employer, but particularly those in the culinary world. Rick Bayless, author, and Executive Chef and Co-Owner of the James Beard award-winning Frontera Grill, says: “You only master a craft by doing, so coming out of culinary school and expecting that you are a master craftsman is never going to happen. I always tell students, put your head down and master your craft because it’s only in the practice that you will become that master that probably in your head you are dreaming of being one day. It takes a really, really long time.” Executive Chef Mindy Segal, owner of a thriving Midwest café, (http:// hotchocolatechicago.com/) agrees: “Ask a bartender what’s the perfect Manhattan? It’s when you make it 500,000 times.” n 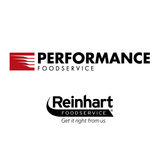