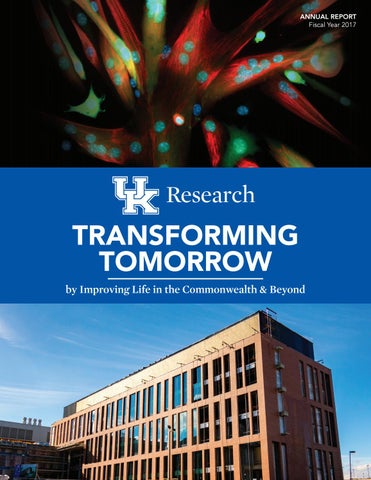 by Improving Life in the Commonwealth & Beyond

Mature muscle cells have more than one nucleus (blue circles). Scientists are using these cultured cells to better understand muscle growth in adults. This image was captured by Kevin A. Murach, a postdoc in the UK College of Health Sciences, who works on NIH-funded research with Charlotte A. Peterson (College of Health Sciences) and John J. McCarthy (College of Medicine). It won the Federation of American Societies for Experimental Biologyâ&#x20AC;&#x2122;s BioArt competition.

Message from the Vice President for Research

ur distinctive position as a flagship, land-grant institution is reflected by the unique breadth and depth of the research enterprise at the University of Kentucky (UK).

UK is one of only eight institutions in the country with the full one-campus complement of liberal arts, professional, agricultural and healthcare colleges. This environment promotes collaborative research across disciplines that offers innovative research opportunities to both undergraduate and graduate students. Working together, we are harnessing multidisciplinary research to create solutions for the Commonwealth’s most intractable problems. Solutions to our real-life challenges in Kentucky are applicable worldwide. The $265 million multidisciplinary research building ( jointly funded by the state of Kentucky and UK) will open in 2018. This new building will house researchers focused on Kentucky’s most pressing health challenges: cancer, obesity, diabetes, cardiovascular diseases including stroke, and substance abuse. The approach is to bring together teams of researchers—health care researchers (both basic and clinical), public health, behavioral sciences, agricultural outreach and extension, economics and engineering—to develop solutions to these complex problems. Our faculty, staff and students have successfully competed for extramural funding to support the research mission, resulting in improved rankings for our research enterprise—64th among all higher education institutions, 41st among public institutions in the NSF Higher Education Research and Development Survey. Research expenditures at UK in 2016 were $349.7 million. Rankings and numbers are important, but it is the impact of our research mission that makes a difference in the lives of Kentuckians. STRATEGIC PLAN: RESEARCH & SCHOLARSHIP FIGURE 1: Strategic Plan: Research & Scholarship Metric

Doctoral Programs in Top 25% of Discipline

Proportion of Publications Cited in Top 50% of Discipline

“We believe in the powerful idea that brainpower, harnessed in common cause against insidious problems, can find answers. From basic science to working directly in and with communities, UK’s research enterprise is engaged in the critical questions of our day. It’s why I proudly say that we are the University for Kentucky.” Eli Capilouto, University of Kentucky President

IN NATIONAL INSTITUTES OF HEALTH GRANTS

BUILDING UNDER CONSTRUCTION FOR RESEARCH ON KY'S BIGGEST HEALTH CHALLENGES

ACTIVE STARTUPS RELATED TO UK TECHNOLOGY All numbers are from FY2017.

2017-2018 UNIVERSITY RESEARCH PROFESSORS The University Research Professors Program recognizes excellence across the full spectrum of research, scholarship and creative endeavors at UK. College leadership develop criteria for excellence within their area of expertise, and then nominate faculty who excel at these criteria. Each professor receives a one-year award of $10,000. Ole Wendroth, College of Agriculture, Food & Environment Geospatial & Temporal Statistics in Soil Systems

SUBSTANCE ABUSE In 2017 with Centers for Disease Control and Prevention (CDC) funding, the Kentucky Injury Prevention and Research Center, in collaboration with the Office of the State Medical Examiner and county coroner offices, published the first Kentucky Drug Overdose Fatality Surveillance System report. The findings of the report will guide future research and tracking efforts: 1) Lisinopril, a drug to treat hypertension and heart failure, was the third most common prescription drug found at the scene of drug overdose deaths or at autopsy, 2) amphetamine was detected above the therapeutic range, and 3) Gabapentin, prescribed in substance use treatment and for chronic pain, was detected in one-third of all drug overdose deaths. Injection drug use puts people at high risk of HIV and hepatitis C virus (HCV) infection. HCV causes inflammation

of the liver which, left unchecked, increases risk of developing liver cancer. Jennifer Havens (Center on Drug and Alcohol Research) has funding from the National Institute on Drug Abuse (NIDA) to study substance use and associated HIV/HCV risks. Her project in Hazard, Kentucky, examines the impact of the Affordable Care Act and rural syringe services programs on uptake of HIV/HCV treatment and substance abuse treatment. Recent data shows overdose rates for cocaine, specifically in AfricanAmericans, are at the same level as opioid overdose rates in non-AfricanAmericans. Using computational drug design Chang-Guo Zhan (College of Pharmacy) is seeking the first FDAapproved treatment for cocaine addiction. With a $6 million NIDA grant, his team is evaluating novel enzymes to neutralize cocaine in the bloodstream.

The Burden of Complex Health Conditions

CANCER UK was awarded a prestigious, five-year, $11.2 million Centers of Biomedical Research Excellence (COBRE) grant from the NIH to principal investigators Daret St. Clair and Peter Zhou (College of Medicine). The grant will fund UK's Center for Cancer and Metabolism which capitalizes on highly specialized institutional strengths in cancer and advanced metabolomics tools to focus on the underlying mechanisms that link dysfunctional metabolism to cancer. The center will also mentor early-stage cancer researchers. With a new $2.3 million grant from NIH, Allan Butterfield (College of Arts & Sciences), Daret St. Clair and Subbarao Bondada (College of Medicine), are

tackling chemotherapy-induced cognitive impairment. Symptoms include memory lapses, difficulty concentrating, confusion and fatigue. The grant will explore the damage mechanisms and identify cells that produce agents leading to impairment. The Markey Cancer Center is part of a public-private collaboration involving the National Cancer Institute and the Federal Communications Commission that will focus on increasing broadband access and adoption in rural areas to improve the lives of rural cancer patients. Broadband-enabled technologies can transform the way cancer patients and survivors better manage, monitor and treat their symptoms.

DIABETES & OBESITY based facilitators to coordinate health care services. With a $1.6 million NIDDK grant, Philip Kern (College of Medicine) and Esther Dupont-Versteegden (College of Health Sciences) are investigating if the combination of pioglitazone (a drug for diabetes) and mirabegron (a drug for overactive bladder) is more effective than either drug alone at increasing both brown and beige fat activity, reducing inflammation and improving insulin sensitivity.

Nancy Schoenberg (College of Medicine) received a new five-year, $3.1 million grant from the National Institute of Diabetes and Digestive and Kidney Diseases (NIDDK) to continue the Faith Moves Mountains initiative. Through relationships with churches in Appalachian communities, this project provides self-management education on Type 2 diabetes and trains community-

Alison Gustafson (College of Agriculture, Food, and Environment) is targeting obesity and food insecurity through two USDA grants. Gustafson is working with adolescents in rural Kentucky and North Carolina to test the effectiveness of a peer-led text message intervention aimed at improving food purchasing habits in rural communities. The Higher Education Challenge Grant Obesity Food Insecurity Paradox project will develop an undergraduate course in Fall 2018 and provide hands-on training with service in obesity clinics and at Campus Kitchens and other hunger-related community programs.

Kenneth Campbell (College of Medicine) and Jonathan Wenk (College of Engineering) are developing computer software to deliver better therapies for patients with life-threatening heart failure. Thanks to a five-year, $3 million grant from the National Institutes of Health, the team is creating a computer model of the heart, based on data from mice, that can be customized to predict long-term results of specific treatments. Caregivers of chronically ill patients can neglect their own psychological and physical health while attending to the needs of a loved one. With a $2.6 million grant from the National Institutes of Nursing Research, Debra Moser and Misook Lee Chung (College of Nursing) will implement and test outcomes from the Rural Intervention for Caregivers’ Heart Health intervention (RICHH), which aims to reduce cardiovascular risks and depressive symptoms through digital tools rural caregivers can use at home. With a four-year, $1 million National Heart Lung and Blood Institute grant, Venkat Subramanian (College of Medicine) is studying the role of a class of proteases, called calpains, on the development of abdominal aortic aneurysms. This unique approach to determining the role of structural elements in the smooth muscle cells in aortic disease will assist in development of new therapies for a disease that currently has no drug treatments.

Rachel Maggard, Daimen Stolz and Lydia Hager, with their mentor Warren Alilain, helped confirm the presence of a breathing “ghost network” that might help restore breathing function to paraplegics.

More than 50 percent of spinal cord injuries occur at the cervical level, where phrenic motor neurons control the diaphragm. With funds from the National Institute of Neurological Disorders &

Stroke, Warren Alilain (Spinal Cord and Brain Injury Research Center) is examining the changes that take place in phrenic circuitry in response to injury and investigating potential therapies that can

With funding from the Center for Clinical & Translational Science and philanthropic grants, Craig van Horne (Kentucky Neuroscience Institute) is expanding Parkinson’s patient care through a pilot program which pairs deep-brain stimulation (DBS) surgery—implanting a device like a pacemaker that regulates nerve cues in the brain—and a nerve tissue graft from the ankle into the brain. This procedure, called DBS Plus, could also help restore nervous system function in stroke and epilepsy patients.

The Center for Applied Energy Research operates one of the only production lines for spinning experimental fibers and precursor carbon fiber in the United States.

essential components of technologies like smartphones, computers and electric vehicles. Honaker received $7 million from the Department of Energy to produce REEs from Kentucky coal sources and $1 million for other REE projects.

The University of Kentucky continued an upward trajectory in successfully competing for sponsored grants and contracts. Between 2016 and 2017, UK saw a 4.7% increase in awards.

The majority of UK’s external funding comes from federal sources (53.8%). State funding makes up 27.4% and industry contracts are 5.5% of the total grant and contract awards received by the university.

UK’s research enterprise is heavily funded by the National Institutes of Health (63.9% of all federal awards). NIH grants to UK increased by 23.3% in 2017 compared to 2016.

OVER THE LAST 5 YEARS 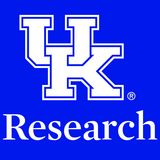 Annual report (fiscal year 2017) from the research enterprise for the University of Kentucky under the direction of the Office of the Vice P...

Annual report (fiscal year 2017) from the research enterprise for the University of Kentucky under the direction of the Office of the Vice P...