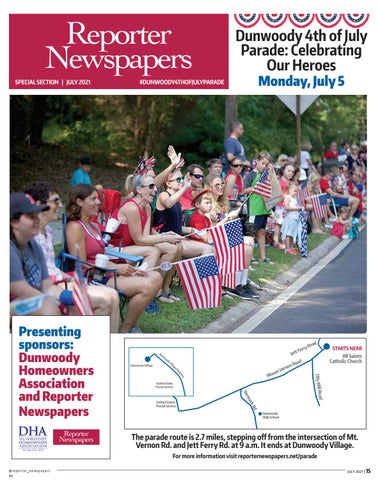 STARTS NEAR All Saints Catholic Church

The parade route is 2.7 miles, stepping off from the intersection of Mt. Vernon Rd. and Jett Ferry Rd. at 9 a.m. It ends at Dunwoody Village. For more information visit reporternewspapers.net/parade @reporter_newspapers SS

This year’s parade celebrates those crucial workers who served citizens during the pandemic. That includes Dunwoody Police Department, DeKalb Fire and Safety, healthcare workers, grocery and pharmacy store employees, and restaurant workers. Anyone who was on the frontlines during the health crisis is welcome to participate. Brighton Gardens Assisted Living Center will also have a bus with some of their residents as part of the Grand Marshal group.

Doug Turnbull is the PM drive Skycopter anchor for Triple Team Traffic on 95.5 WSB and is also known as the Gridlock Guy. He hosts a traffic podcast with Smilin’ Mark McKay on wsbradio.com.

activities, including performances from the 116th Army Band and a kids zone with party jumpers

Fourth of July Parade Presented by:

SPECIAL FLOATS AND MUSIC 116th National Army Guard Marching Band Founded in 1859, the 116th Army Band of the Georgia Army National Guard is the oldest National Guard band in existence. In 2020, many members of the band took on roles in response to the COVID-19 pandemic, helping to staff and supervise food and medical supply distribution centers, virus testing coordination, and quarantine facility management. Over the past few months, the band has returned to providing musical support for military functions and community outreach.

Georgia Garrison of the 501st Legion

Formed in 1998, the Georgia Garrison of the 501st Legion is an all-volunteer organization formed bring together costume enthusiasts. The group specifically promotes interest in Star Wars through community events and volunteer work.

Spirit of Atlanta Drum &amp; Bugle Corps Spirit of Atlanta was founded in 1976 as a nonprofit youth performing arts education organization based in Atlanta. Its goal is to provide challenging, high-quality programs for youth that emphasizes character and social development, leadership, self-discipline, and the pursuit of excellence.

FOOD Boy Scout BBQ Immediately following the parade, the Boy Scouts will be serving food, from 11 a.m. to 1 p.m. in the Dunwoody Village parking lot. It’s a major fundraiser for the troop, helping fund equipment, training materials and need-based scholarships. The $12 ticket includes a shredded BBQ chicken or pork sandwich and coleslaw, watermelon, brownie and drink.

Rotary Club Hotdogs The Rotary Club of Dunwoody will operate a hot dog stand in the Dunwoody Village parking lot. It will open at 9 a.m. until the parade is over. The revenue helps fund community service projects. They will sell hot dogs, drinks, chips and homemade cookies.

Moondog Beer Dunwoody’s Moondog Growlers will offer three craft beers for $5, along with canned wine for $8. Cash, Venmo and Paypal only. @reporter_newspapers SS

to our U.S. Armed Forces

In honor of “Independence Day”, Scenthound Dunwoody is recognizing our local Military personnel by offering free basic grooming services for their furry family members Thursday, July 29th to Saturday, July 31st. U.S. Active-duty, Reservists, or National Guard military service members (with a valid i.d.) can schedule their dogs on July 29th, 30th, and 31st to receive a FREE E-scent-ials package (a bath, ear cleaning, nail clip, and teeth brushing). Services offered by appointment only and based on availability. Limited to one use and one dog per person.

Contact dunwoody@scenthound.com or call us at 678-990-1900 for more information and to schedule! 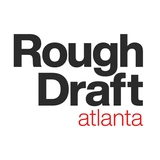