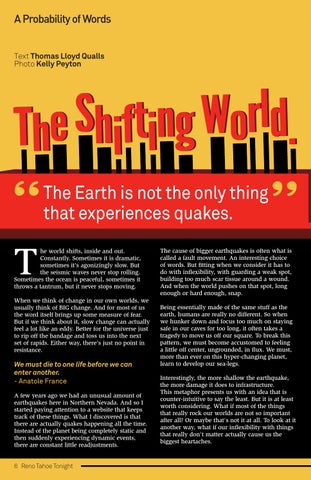 The Earth is not the only thing that experiences quakes.

he world shifts, inside and out. Constantly. Sometimes it is dramatic, sometimes itâ&amp;#x20AC;&amp;#x2122;s agonizingly slow. But the seismic waves never stop rolling. Sometimes the ocean is peaceful, sometimes it throws a tantrum, but it never stops moving. When we think of change in our own worlds, we usually think of BIG change. And for most of us the word itself brings up some measure of fear. But if we think about it, slow change can actually feel a lot like an eddy. Better for the universe just to rip off the bandage and toss us into the next set of rapids. Either way, thereâ&amp;#x20AC;&amp;#x2122;s just no point in resistance.

We must die to one life before we can enter another. - Anatole France A few years ago we had an unusual amount of earthquakes here in Northern Nevada. And so I started paying attention to a website that keeps track of these things. What I discovered is that there are actually quakes happening all the time. Instead of the planet being completely static and then suddenly experiencing dynamic events, there are constant little readjustments. 6 Reno Tahoe Tonight

The cause of bigger earthquakes is often what is called a fault movement. An interesting choice of words. But fitting when we consider it has to do with inflexibility, with guarding a weak spot, building too much scar tissue around a wound. And when the world pushes on that spot, long enough or hard enough, snap. Being essentially made of the same stuff as the earth, humans are really no different. So when we hunker down and focus too much on staying safe in our caves for too long, it often takes a tragedy to move us off our square. To break this pattern, we must become accustomed to feeling a little off center, ungrounded, in flux. We must, more than ever on this hyper-changing planet, learn to develop our sea-legs. Interestingly, the more shallow the earthquake, the more damage it does to infrastructure. This metaphor presents us with an idea that is counter-intuitive to say the least. But it is at least worth considering. What if most of the things that really rock our worlds are not so important after all? Or maybe that&#39;s not it at all. To look at it another way, what if our inflexibility with things that really don&#39;t matter actually cause us the biggest heartaches.