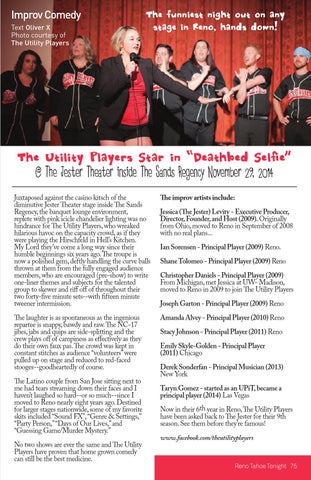 The funniest night out on any stage in Reno, hands down!

The Utility Players Star in “Deathbed Selfie” @ The Jester Theater inside The Sands Regency November 29, 2014 Juxtaposed against the casino kitsch of the diminutive Jester Theater stage inside The Sands Regency, the banquet lounge environment, replete with pink icicle chandelier lighting was no hindrance for The Utility Players, who wreaked hilarious havoc on the capacity crowd, as if they were playing the Hirschfeld in Hell’s Kitchen. My Lord they’ve come a long way since their humble beginnings six years ago. The troupe is now a polished gem, deftly handling the curve balls thrown at them from the fully engaged audience members, who are encouraged (pre-show) to write one-liner themes and subjects for the talented group to skewer and riff off of throughout their two forty-five minute sets--with fifteen minute tweener intermission.

The improv artists include:

The laughter is as spontaneous as the ingenious repartee is snappy, bawdy and raw. The NC-17 jibes, jabs and quips are side-splitting and the crew plays off of campiness as effectively as they do their own faux pas. The crowd was kept in constant stitches as audience “volunteers” were pulled up on stage and reduced to red-faced stooges--goodheartedly of course.

The Latino couple from San Jose sitting next to me had tears streaming down their faces and I haven’t laughed so hard--or so much--since I moved to Reno nearly eight years ago. Destined for larger stages nationwide, some of my favorite skits included “Sound FX”, “Genre &amp; Settings,” “Party Person,” “Days of Our Lives,” and “Guessing Game/Murder Mystery.” No two shows are ever the same and The Utility Players have proven that home grown comedy can still be the best medicine.