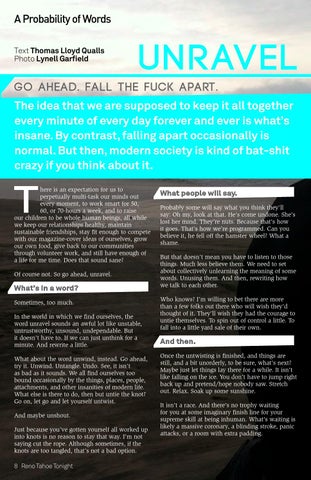 Go a hea d. Fa ll the fuck a pa rt. The idea that we are supposed to keep it all together every minute of every day forever and ever is what’s insane. By contrast, falling apart occasionally is normal. But then, modern society is kind of bat-shit crazy if you think about it.

here is an expectation for us to perpetually multi-task our minds out every moment, to work smart for 50, 60, or 70-hours a week, and to raise our children to be whole human beings, all while we keep our relationships healthy, maintain sustainable friendships, stay fit enough to compete with our magazine-cover ideas of ourselves, grow our own food, give back to our communities through volunteer work, and still have enough of a life for me time. Does that sound sane? Of course not. So go ahead, unravel.

What’s in a word? Sometimes, too much. In the world in which we find ourselves, the word unravel sounds an awful lot like unstable, untrustworthy, unsound, undependable. But it doesn’t have to. If we can just unthink for a minute. And rewrite a little. What about the word unwind, instead. Go ahead, try it. Unwind. Untangle. Undo. See, it isn’t as bad as it sounds. We all find ourselves too bound occasionally by the things, places, people, attachments, and other insanities of modern life. What else is there to do, then but untie the knot? Go on, let go and let yourself untwist. And maybe unshout. Just because you’ve gotten yourself all worked up into knots is no reason to stay that way. I’m not saying cut the rope. Although sometimes, if the knots are too tangled, that’s not a bad option. 8 Reno Tahoe Tonight

What people will say. Probably some will say what you think they’ll say: Oh my, look at that. He’s come undone. She’s lost her mind. They’re nuts. Because that’s how it goes. That’s how we’re programmed. Can you believe it, he fell off the hamster wheel? What a shame. But that doesn’t mean you have to listen to those things. Much less believe them. We need to set about collectively unlearning the meaning of some words. Unusing them. And then, rewriting how we talk to each other. Who knows? I’m willing to bet there are more than a few folks out there who will wish they’d thought of it. They’ll wish they had the courage to untie themselves. To spin out of control a little. To fall into a little yard sale of their own.

And then. Once the untwisting is finished, and things are still, and a bit unorderly, to be sure, what’s next? Maybe just let things lay there for a while. It isn’t like falling on the ice. You don’t have to jump right back up and pretend/hope nobody saw. Stretch out. Relax. Soak up some sunshine. It isn’t a race. And there’s no trophy waiting for you at some imaginary finish line for your supreme skill at being inhuman. What’s waiting is likely a massive coronary, a blinding stroke, panic attacks, or a room with extra padding.