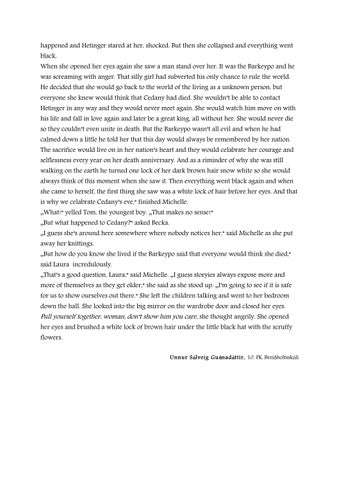 happened and Hetinger stared at her, shocked. But then she collapsed and everything went black.

When she opened her eyes again she saw a man stand over her. It was the Barkeypo and he was screaming with anger. That silly girl had subverted his only chance to rule the world. He decided that she would go back to the world of the living as a unknown person, but everyone she knew would think that Cedany had died. She wouldn‘t be able to contact

Hetinger in any way and they would never meet again. She would watch him move on with his life and fall in love again and later be a great king, all without her. She would never die so they couldn‘t even unite in death. But the Barkeypo wasn‘t all evil and when he had

calmed down a little he told her that this day would always be remembered by her nation. The sacrifice would live on in her nation‘s heart and they would celabrate her courage and selflessness every year on her death anniversary. And as a riminder of why she was still

walking on the earth he turned one lock of her dark brown hair snow white so she would always think of this moment when she saw it. Then everything went black again and when

she came to herself, the first thing she saw was a white lock of hair before her eyes. And that is why we celabrate Cedany‘s eve,“ finished Michelle. „What!“ yelled Tom, the youngest boy. „That makes no sense!“ „But what happened to Cedany?“ asked Becka. „I guess she‘s around here somewhere where nobody notices her,“ said Michelle as she put away her knittings.

„But how do you know she lived if the Barkeypo said that everyone would think she died,“ said Laura incredulously. „That‘s a good question, Laura,“ said Michelle. „I guess storyies always expose more and more of themselves as they get older,“ she said as she stood up. „I‘m going to see if it is safe for us to show ourselves out there.“ She left the children talking and went to her bedroom down the hall. She looked into the big mirror on the wardrobe door and closed her eyes.

Pull yourself together, woman, don‘t show him you care, she thought angrily. She opened her eyes and brushed a white lock of brown hair under the little black hat with the scruffy flowers. Unnur Sólveig Guðnadóttir, 10. FK, Breiðholtsskóli 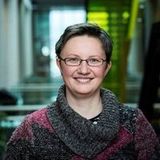