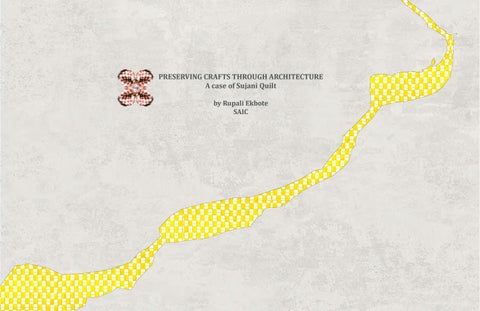 THESIS STATEMENT It is through the practice of craft that one connects to the history of the people, place and their culture. Every civilization throughout history has had a textile tradition through which people learn and sustain their social, civic and religious practices. Semper argued that architecture’s origin was not in nature but in-fact in ‘textiles’…and saw the wall as a woven enclosure with carpets and tapestries being the �irst spatial demarcations describing wickerwork as the “essence of the wall.”(Semper, 1989) The Craftsmen involved in making such crafts that are passed on through generations are extremely knowledgeable, culturally rich and yet their livelihoods and skills are in danger today. It is observed that as the mainstream society continues to progress, the craftsmen sees de-appreciation for their skills and lowered value of their workmanship which eventually results in the loss of the craft and with that, an entire legacy of knowledge.

A textile craft of a 200-year-old pocketed quilt named ‘Sujani’ calls for preservation today. The reasons for its decline are the lack of awareness and disinterest among normal public for the craft. A renewed experience of an existing ‘heritage walk’ is perceived as a giant exhibition ground for Sujani, to pull the craft out from its remote setting onto the streets, giving it the space to breathe a new contemporary life for its survival. The aim of this research is to study this local craft and bring awarenness for the craft among wider public by way of articulation of the existing architectural sites of historical signi�icance. This thesis tests the potential of crafts through its ‘Integration’, ‘translation’ and/or ‘supplementation’ using current techniques and argues that a local craft can be preserved through architecture for the interpretation of a cultural condition within the fabric of its belonging.

INTRODUCTION AND THEORY “Architecture only concerns itself with those characters of an edi�ice which are above and beyond its common use. Building becomes architecture when the technical and functional considerations are resolved and the real aspect of production are taken to the level of poetic expression.” The Seven Lamps of Architecture (1849) Ruskin John

Craft can be seen as a medium of expression in architecture… that can help measure and evaluate a cultural condition of a place over time. “Craft works with spatial and temporal concerns to produce a space crafting that is attentive to signs of matter, a privileging of the haptic (a tendency that invites close attention) as distinct from the optic (a tendency towards detachment), a working and reworking that differs from design techniques of abstraction.”

“It is also refreshing to be reminded that architecture can be evaluated by an entirely different set of criteria, involving the appreciation of craft and an expressive emphasis on its tectonic and tactile dimension.” Carl Botticher’s Kernform (building craft) and the Kunstform (surface craft) and Frampton’s tectonic and stereotomic theories re-inspire oneself to think of the physiological and emotional engagement of the human senses with the built form, so as to make a meaningful representation. “It seeks in this way to re-affirm the very ancient

connection between the arti�icer and the arti�ice, between the designer’s initial conception and design’s hard-won ingenuity.” Foreward by H.F. Mallgrave, Frampton, Kenneth, and John Cava, Studies in Tectonic Culture

ARCHITECTURE AND CRAFT initiate PRESERVATION “the fundamental character of dwelling is this sparing and preserving” The craftsman, Sennett

Preservation of the craft and architecture both can contribute to construct visual congeniality in the minds of the people regardless of where they are at a speci�ic place and time. Research into the brain and memory has found that the brain makes new neural pathways during recollection as the retelling of a memory connects it to the time and place where it is retold. On memory: Deborah Aschheim at the Mattress Factory, Grenier L., 2007

Through the visual representation of mapping, geography and history is mediated by time and space – by landscape and narrative. Therefore, the connection between place and narrative is intrinsic to heritage. It provides the setting for an inner landscape of places and memories, which establishes ‘landmarks’ from which the story is told. The stories of the past help inform and shape the perceptions of histories. Landscapes are tangible in terms of their physical location and character that de�ines the place and intangible in terms of the process of memory in place. Exploring the opportunity of craft and narrative in architecture. Peens Macarthy I., 2013

“Understanding the view of the city as plan is very different to the experience of the plan as city, and this difference opens the city to the lens of sentimentality as both a form of nostalgia (remembrance of things past) and a means of production. The future city might bene�it from engaging with the process of how it might be possible to employ the means of craft through the lens of sentimentality to (re) locate (and possibly generate) ideas from derivative and disintegrating images. Crafting the imaginary, Hinton E. and Bremner C.

Sujani loom process 1. BEAMING / WARPING The process of win�ing the hank yarn onto the warp beam for the required 65” width of Sujani and attaching to the requisite ends of the previous beam.

2. DRAFTING AND LIFTING The process of passing the warp ends through the heald eyes of the shafts and helps determining the number of heald shafts per given weave repeat.

The process of passing warp ends from heddles through the reed comb is termed as denting. normally two ends are passed through each dent of the reed comb.

It is the inal step of loom setting process where each sub-division of the warp sheet is tied individually to the cloth beam starting from the center moving outwards.

INTRODUCE INTERDISCIPLINARY DESIGN IDEAS AND USE

EXPENSES IN FAIRS AND AFFORDABILTIY

the female form has often been used in the development of inspiring places.

an international and collaborative measure to confront modernism and spread knowledge.

furniture as an apparatus for communication inside and outside space

HISTORY OF OLD CITY OF BHARUCH

A Greco-roman travel book named ‘Periplus of Erythraean Sea’ written in 1st CE in Greek, referred to the great port of Barygaza or Bharuch at the mouth of river Nammadus (Narmada). www.livehistoryindia.com

18th CE TRADING ON LAND AND WATERS with EGYPT, THE PERSIAN GULF, SYRIA, CEYLON AND THE FAR EAST.

Drawings by Burgess, J. (1896). On the Muhammadan architecture of Bharoch

Donated it as a school in Satyagrah movement as a part of Indiaâ&#x20AC;&#x2122;s freedom struggle Masonry and wood construction

today being used as a community gathering space

CONCLUSION The preservation of a dwindling craft of cultural signiďż˝icance like Sujani is essential to be kept alive and can be done by its physical integration, translation, and supplementation within the built environment. Not only will this initiate conversations/discussions about the craft and skills but by allowing its expression in parallel with the heritage structures as a part of Bharuch heritage walk initiative, one can create new spaces or re-invigorate the existing. Thus, making the craft live in the memory as a part of collective consciousness through the senses of vision and touch. 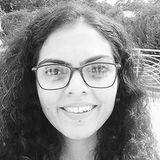 Preserving Crafts through Architecture - A case of Sujani Quilt

Preserving Crafts through Architecture - A case of Sujani Quilt