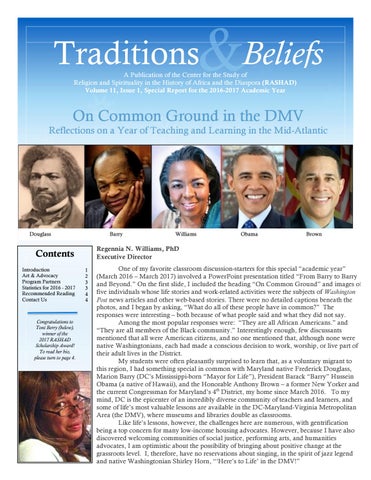 A Publication of the Center for the Study of Religion and Spirituality in the History of Africa and the Diaspora (RASHAD) Volume 11, Issue 1, Special Report for the 2016-2017 Academic Year

Congratulations to Toni Berry (below), winner of the 2017 RASHAD Scholarship Award! To read her bio, please turn to page 4.

One of my favorite classroom discussion-starters for this special “academic year” (March 2016 – March 2017) involved a PowerPoint presentation titled “From Barry to Barry and Beyond.” On the first slide, I included the heading “On Common Ground” and images of five individuals whose life stories and work-related activities were the subjects of Washington Post news articles and other web-based stories. There were no detailed captions beneath the photos, and I began by asking, “What do all of these people have in common?” The responses were interesting – both because of what people said and what they did not say. Among the most popular responses were: “They are all African Americans.” and “They are all members of the Black community.” Interestingly enough, few discussants mentioned that all were American citizens, and no one mentioned that, although none were native Washingtonians, each had made a conscious decision to work, worship, or live part of their adult lives in the District. My students were often pleasantly surprised to learn that, as a voluntary migrant to this region, I had something special in common with Maryland native Frederick Douglass, Marion Barry (DC’s Mississippi-born “Mayor for Life”), President Barack “Barry” Hussein Obama (a native of Hawaii), and the Honorable Anthony Brown – a former New Yorker and the current Congressman for Maryland’s 4th District, my home since March 2016. To my mind, DC is the epicenter of an incredibly diverse community of teachers and learners, and some of life’s most valuable lessons are available in the DC-Maryland-Virginia Metropolitan Area (the DMV), where museums and libraries double as classrooms. Like life’s lessons, however, the challenges here are numerous, with gentrification being a top concern for many low-income housing advocates. However, because I have also discovered welcoming communities of social justice, performing arts, and humanities advocates, I am optimistic about the possibility of bringing about positive change at the grassroots level. I, therefore, have no reservations about singing, in the spirit of jazz legend and native Washingtonian Shirley Horn, “‘Here’s to Life’ in the DMV!”

Cultural Encounters with DC’s Legendary Musicians and Scholars Like other social and cultural historians, I have long viewed DC as “Duke Ellington’s Washington.” In fact, the Ellington Manuscript Collection at the Smithsonian’s National Museum of American History is one of the most extensive that I have had the privilege of working with. The collection is also useful for those in search of information about others with ties to jazz, especially those in Ellington’s immediate circle, including his sister Ruth Ellington Boatwright and pianistcomposer Billy Strayhorn. During the 2016-2017 academic year, however, in addition to the Smithsonian treasures, it was my great pleasure to work with the Rev. Dr. Sandra Butler-Truesdale, founding Director and Chair of DC Legendary Musicians, Inc. (DCLM). The mission of this Washington-based non-profit organization is to “preserve, protect and promote the artistic legacy, contributions, and well-being” of musicians, “and to educate students and the community as a whole on the careers and contributions” of these performing artists. With its focus on the legacies of Ellington, Marvin Gaye, and the many musical legends living in the District, DCLM’s work promises to transform the local music scene, writing about that same scene, and the quality of life for the musicians. We at RASHAD are fortunate to have the opportunity to work with Dr. Butler-Truesdale, who will join me in co-authoring Washington DC’s Jazz for Arcadia Publishing (Forthcoming, 2017). --RNW Dr. Sandra ButlerTruesdale is pictured above with two members of DCLM, vocalist Steve Alston and saxophonist John Woodridge. On the right, Dr. Butler-Truesdale holds the bouquet of roses that she received after a February 23, 2017 African American History Month reception and DCLM performance at the Woodrow Wilson Center. Washington’s U Street, A Biography (2010), authored by Dr. Blair Ruble, tells the incredible story of the community that was ButlerTruesdale’s childhood home and the location of what musicians of Ellington’s generation referred to as “Black Broadway.” (Photos courtesy of Dr. Regennia N. Williams.)

New Board Members for the Maryland-Based RASHAD Center, Inc.

7 Advisory Board Members for the Journal of Traditions &amp; Beliefs (JTB)

Thanks for your support!

Below: UDC student Marissa Harris. (*All images on this page are from the October 8, 2016 “Sing to the Rafters” workshop. Nathaniel Rhodes, photographer.)

All JTB statistics obtained via the editor’s dashboard at http://engagedscholarship.csuohio.edu/jtb/.

Recommended Reading In Long Road to Hard Truth (Proud Legacy Publishing, 2016), author Robert L. Wilkins, a judge on the United States Court of Appeals for the District of Columbia Circuit, shares a carefully researched account of the struggle to establish the National Museum of African American History and Culture. In ten chapters and fewer than 200 pages (including detailed notes), Judge Wilkins invites readers to journey with him through 100 years of history. Sources include everything from 19th- and 20th-century newspaper articles to 21stcentury web-based sources and Congressional and Smithsonian records. In the final analysis, the book is both inspirational and enlightening.--RNW

Congratulations to Toni Berry, Winner of the 2017 RASHAD Scholarship (Continued from page 1)

Toni Berry, a senior in Cleveland State Universityâ&amp;#x20AC;&amp;#x2122;s Department of History, is the winner of the 2017 RASHAD Scholarship. A native of Syracuse, New York, she is a long-time Ohio resident, an alumna of Shaker Heights High School, and someone who balances the demands of full-time employment with those of challenging academic work. She has a special love for British history and archival research and credits her supportive and encouraging family, professors, and classmates with fueling her desire to succeed. After completing her BA, Berry plans to pursue an MA in History. *Photo and bio courtesy of Toni Berry. 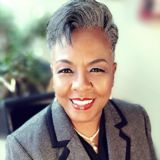