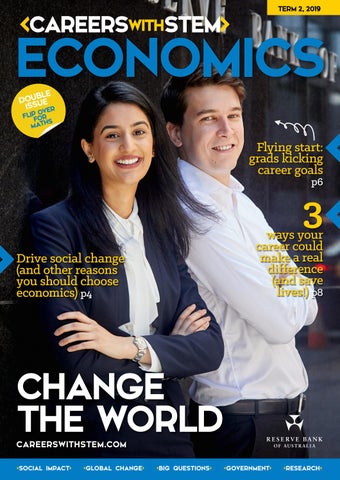 ways your career could make a real difference (and save lives!) p8

Drive social change (and other reasons you should choose economics) p4

Discover skills for the future.

Economics gives you skills for the future

The skills you develop can lead to so many different careers and jobs, not just being an economist!”

ics at university, hen I was studying econom t was important for jec sub it was clear to me the t affected everyday life. answering questions tha choices are made – about Economics is about how their limited ieties choose to allocate how individuals and soc . nts wa ds and resources to meet their nee ut me understand more abo ped hel ics nom eco ng Studyi ues iss ns in the news, the the day-to-day discussio country relationship between our the and Australians face, a to dat ng usi of a ide the . I loved and the rest of the world t, fac In r to people’s daily lives. job. solve problems that matte a difference through my ke ma now icy economist, I can ng pol ngi a cha as p t, kee tha ky ms luc ble l pro fee I economics is that the ut abo ngs thi g itin exc One of the most learning. over time, so I’m always about things – to ask mework for how to think fra a you utions es giv ics nom Eco ce, and find practical sol a, test and evaluate eviden dat a the to d iew pte rev ada ns, be stio can que ible and rk is extraordinarily flex eers car ent fer dif ny ma to problems. This framewo so to lead e skills you develop can broad range of areas. Th ist! nom eco es; and jobs, not just being an ideas from other disciplin allow you to incorporate It’s an s. che roa app and Economic concepts also sts with different intere ple peo of lots h come l wit te wil predict what I get to collabora nment – you can’t always iro env g gin llen cha and interactive nging, up in any working day. the labour market is cha of time considering how growth ge wa for ans me In my role, I spend a lot s ologies, and what thi hn tec new to se pon res for example, in in the future. and what jobs will look like threat of robots and little more immune to the a ly bab pro are ists nom Eco job is about actively er professions. A lot of our ny different places. automation than many oth ing information from ma sis the syn ely ativ cre oofing subject and I think questioning and nomics is a great future-pr Eco . ate om sh aut to y eas That’s not There will always be fre unities become available. ort opp new as lve evo l it wil new questions to ask. challenges to solve and Alex Heath stralia sis, Reserve Bank of Au Head of Economic Analy

Why should ? s c i m o n o c e y I stud than you think There’s more to this career

ject that helps you conomics is a broad sub und you. At its understand the world aro dy of human stu the is core, economics best to use how and ng aki decision-m care about ists nom our limited resources. Eco as: What are h suc ns stio que trade-offs. They ask this decision? How can the costs and benefits of fairness? What wil l we balance efficiency and iety? soc for d goo provide the most

So why study it?

Great earning potential The skills you develop in learning economics are highly sought after and rewarded in the workplace. Researchers at the Reserve Bank of Australia (which employs a lot of economists!) found that economics graduates typically have higher full-time earnings than graduates from most other fields of study. And, according to Payscale.com, an economics graduate can expect a starting salary upwards of $75,000 a year, with that increasing to $130,000+ with more experience.

An economics degree can take you into public policy, the health or environment sectors, international development, banking, finance, research or journalism – to name just a few. Whether it’s macroeconomics (the behaviour of the economy as a whole) or microeconomics (the behaviour of individual people, firms and markets) your economics skills will allow you to explore a wide range of issues.

You might not have heard of him, but economist Muhammad Yunus has changed the fortunes of millions of people – particularly women – in impoverished nations by pioneering microcredit: very small loans given to people too poor to qualify for traditional bank loans. Microcredit loans have enabled even the poorest of the poor to break out of poverty by setting up a small business. Muhammad and the Grameen Bank were awarded the Nobel Peace Prize in 2006, which shows how the application of economics can transform lives for the better.

#4 Understand the world around you Are you the kind of person who reads a headline or see s something happen and wonders why? Econom ics can equip you with the ana lytical and observational skills to seek answers to some of the bigg est (and smallest) questions in day-to-day life; breaking down the problem into its working parts, thinking creatively, coll ecting and interrogating the numbers, analysing the bigger picture and app lying those learnings. – Bia nca Nogrady

oya Dhillon moved to Australia from India when she was 13. When it came time to choose subjects for Year 11, economics was a bit of a mystery. “I wasn’t quite sure, but I was curious to learn,” she recalls. “I had an amazing teacher who made it accessible and clear. I loved economics because it was like a theory of common sense that explained so many decisions and events I could observe day to day.” For her university studies, Zoya again chose economics. “I could see an economics degree would have value after I graduated,” she says. “It’s not limited. You can take economics anywhere you want and do anything with it – you never get bored.” After university, Zoya completed a few internships before realising she wanted to work as a professional economist in the public sector so she applied for the Reserve Bank of Australia’s (RBA) graduate program. While she enjoyed microeconomics at university – understanding the behaviour of individuals, firms and markets – she currently works in macroeconomics, looking at the economy on a national or global scale. “In my current role as a senior analyst in the financial stability department at the RBA, I analyse the financial health of Australian households, which ultimately impacts the health of the financial system and the economy,” she says. “Unlike some areas, where the things you learn at uni are soon redundant, I’ve been able to directly apply the things I studied in my economics degree.”

Bachelor of Economics, University of Exeter

he 2008 global financial crisis turned the world upside down – and trying to make sense of it led to a whole new career for Ben Jackman, who was taking a break from university after two years studying biochemistry. “I was quite shocked to read about banks going under in many countries and financial markets grinding to a halt,” recalls Ben. Fascinated, he returned to university, this time switching to study economics. During his degree, Ben joined the RBA’s summer internship program and was excited to work on a project on Chinese investment. After completing an Honours year in economics, he joined the RBA’s graduate program. Ben is now a professional economist at the RBA – and loves his job. “The questions are wide-ranging and interesting,” he says, adding he’s constantly learning new things. There are plenty of opportunities to take on stimulating projects, says Ben, and he also enjoys the day-to-day work in his current role, spotting trends in the Australian economy to help inform the RBA’s decisions. “There’s an enormous range of things you can do with an economics degree – it can take you into just about any industry, all over the world,” says Ben. “I feel lucky to be able to work on questions that I find interesting, and I greatly enjoy making a small contribution to public policy in Australia.”

Honours in Economics, University of Queensland

nomics to improve ons in the developing wor ld

PROTECT THE ENVIRONMENT MENTAL ECONOMIST CAREER GOAL: ENVIRON ironmental ly economic concepts to env WHAT DO THEY DO? App nomic eco ring unintended effects of issues. For example conside ction stru con or ing min by on caused activities – such as polluti

Chris says he wanted to wor k in international developme nt ever since he learned the majority of the world’s pop ulation lives in poverty. “I can’t get over the fact there’s enough resources for no-one to go hungry, everyone to comple te secondary school, everyone to receive basic healthcare , but money isn’t distributed and used in a way that makes this possible.” Chris studied a Bachelor’s degree in commerce majori ng in political science and minoring in eco nomics and is now comple ting a PhD in economics at the Australian National University. He also works as an international development consultant for organisation s suc h as UNICEF and the World Bank. “Gettin g a job as an economist in inte rna tional development is not easy, but it is wor th it,” he says. GET THERE: Combine econom ics and political science or international studies. Chris’s top tip? “Aspiring econom ists should continue to study mathema tics and learn to code. You will need this !”

E AULD GREEN CRUSADER: MAISI always been her passion has nt me iron env the

Maisie says g, maths and problem-solvin – but she also really enjoyed . iner bra noa was ics nom l eco so a career in environmenta nce ree in environmental scie She studied a combined deg l a Masters in Environmenta and economics, followed by icy. in economics and pol Management, specialising nomics to help government eco l nta “I chose environme are d that sustainable choices and businesses understan ir the and iety both soc often the most beneficial for s. say she ,” organisation a consultancy ironmental economist for Maisie now works as an env h clients wit g “I par ticularly enjoy workin called Edge Environment. s. say reduction targets,” she to set science-based carbon nce or ics with environmental scie GET THERE: Combine econom ics nom . “My education in both eco environmental management isie. proved invaluable,” says Ma has and environmental science

save lives CAREER GOAL: HEALTH ECONOMIST WHAT DO THEY DO? Study the

and equity of the healthcare

AVAN Since high school Jaithri kne w she wanted to help peo ple, which drew her to a career in physiotherapy. However, she started to feel like she wan ted to make a difference on a bigger scale and completed a Ma sters in Public Health – whi ch led to a whole new career as a hea lth economist. “A career in health econom ics allows me to pursue my passion for health while working wit h my strengths,” says Jait hri, who is now doing her PhD in health economics at Dea kin University while also workin g as a researcher, special ising in obesity prevention and treatment. “I feel like I am making a real contribution to society by influencing how public health is provided in Australia,” she says. GET THERE: Consider an und ergraduate degree in economics or a health-rela ted field, and a Masters in health economics or public health. – Gemma Chilto n

This special edition explores the diverse and rewarding pathways available when pursuing an education and career in economics.

This special edition explores the diverse and rewarding pathways available when pursuing an education and career in economics.