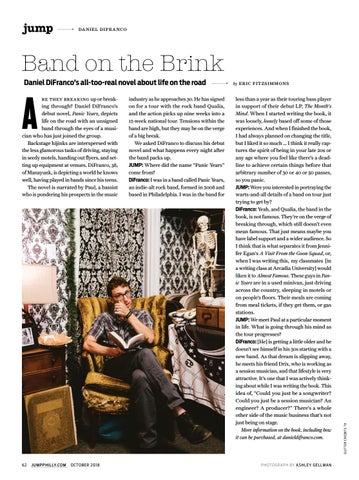 Band on the Brink

re they breaking up or breaking through? Daniel DiFranco’s debut novel, Panic Years, depicts life on the road with an unsigned band through the eyes of a musician who has just joined the group. Backstage hijinks are interspersed with the less glamorous tasks of driving, staying in seedy motels, handing out flyers, and setting up equipment at venues. DiFranco, 38, of Manayunk, is depicting a world he knows well, having played in bands since his teens. The novel is narrated by Paul, a bassist who is pondering his prospects in the music

industry as he approaches 30. He has signed on for a tour with the rock band Qualia, and the action picks up nine weeks into a 12-week national tour. Tensions within the band are high, but they may be on the verge of a big break. We asked DiFranco to discuss his debut novel and what happens every night after the band packs up. JUMP: Where did the name “Panic Years” come from? DiFranco: I was in a band called Panic Years, an indie-alt rock band, formed in 2008 and based in Philadelphia. I was in the band for

less than a year as their touring bass player in support of their debut LP, The Month’s Mind. When I started writing the book, it was loosely, loosely based off some of those experiences. And when I finished the book, I had always planned on changing the title, but I liked it so much … I think it really captures the spirit of being in your late 20s or any age where you feel like there’s a deadline to achieve certain things before that arbitrary number of 30 or 40 or 50 passes, so you panic. JUMP: Were you interested in portraying the warts-and-all details of a band on tour just trying to get by? DiFranco: Yeah, and Qualia, the band in the book, is not famous. They’re on the verge of breaking through, which still doesn’t even mean famous. That just means maybe you have label support and a wider audience. So I think that is what separates it from Jennifer Egan’s A Visit From the Goon Squad, or, when I was writing this, my classmates [in a writing class at Arcadia University] would liken it to Almost Famous. These guys in Panic Years are in a used minivan, just driving across the country, sleeping in motels or on people’s floors. Their meals are coming from meal tickets, if they get them, or gas stations. JUMP: We meet Paul at a particular moment in life. What is going through his mind as the tour progresses? DiFranco: [He] is getting a little older and he doesn’t see himself in his 30s starting with a new band. As that dream is slipping away, he meets his friend Drix, who is working as a session musician, and that lifestyle is very attractive. It’s one that I was actively thinking about while I was writing the book. This idea of, “Could you just be a songwriter? Could you just be a session musician? An engineer? A producer?” There’s a whole other side of the music business that’s not just being on stage. More information on the book, including how it can be purchased, at danieldifranco.com.

Healing 2.0 Can Integrative Medicine help the chronically ill? • Retweet Tweety Bird with iNaturalist • The Humanity of Black Fatherhood • Philly Bike Expo is Back! 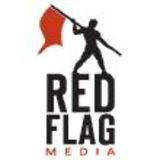