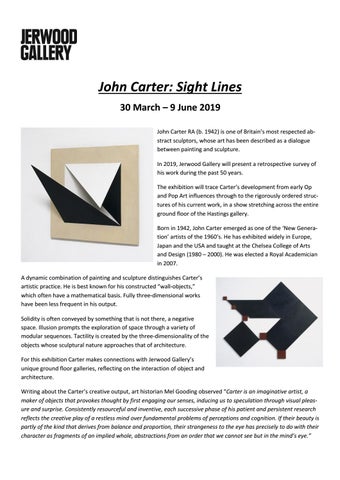 John Carter: Sight Lines 30 March – 9 June 2019 John Carter RA (b. 1942) is one of Britain’s most respected abstract sculptors, whose art has been described as a dialogue between painting and sculpture. In 2019, Jerwood Gallery will present a retrospective survey of his work during the past 50 years. The exhibition will trace Carter’s development from early Op and Pop Art influences through to the rigorously ordered structures of his current work, in a show stretching across the entire ground floor of the Hastings gallery. Born in 1942, John Carter emerged as one of the ‘New Generation’ artists of the 1960’s. He has exhibited widely in Europe, Japan and the USA and taught at the Chelsea College of Arts and Design (1980 – 2000). He was elected a Royal Academician in 2007. A dynamic combination of painting and sculpture distinguishes Carter’s artistic practice. He is best known for his constructed “wall-objects,” which often have a mathematical basis. Fully three-dimensional works have been less frequent in his output. Solidity is often conveyed by something that is not there, a negative space. Illusion prompts the exploration of space through a variety of modular sequences. Tactility is created by the three-dimensionality of the objects whose sculptural nature approaches that of architecture. For this exhibition Carter makes connections with Jerwood Gallery’s unique ground floor galleries, reflecting on the interaction of object and architecture. Writing about the Carter’s creative output, art historian Mel Gooding observed “Carter is an imaginative artist, a maker of objects that provokes thought by first engaging our senses, inducing us to speculation through visual pleasure and surprise. Consistently resourceful and inventive, each successive phase of his patient and persistent research reflects the creative play of a restless mind over fundamental problems of perceptions and cognition. If their beauty is partly of the kind that derives from balance and proportion, their strangeness to the eye has precisely to do with their character as fragments of an implied whole, abstractions from an order that we cannot see but in the mind’s eye.”

Jerwood Gallery Director Liz Gilmore says “Since opening in 2012 Jerwood Gallery has maintained a strong commitment to showing contemporary art in a Modern context. John Carter’s beautiful sculptural works are a celebration of these artistic sight lines, resonating with so many of the British painters who have been exhibited here over the past seven years.” Jerwood Gallery would like to thank John Carter for his inspiring approach to this exhibition. For more information follow @jerwoodgallery on Twitter and visit www.jerwoodgallery.org NOTES FOR EDITORS John Carter was born in Middlesex in 1942 and studied at the Twickenham School of Art from 1958 and then at Kingston School of Art until 1963. A Leverhulme Travelling Scholarship took him to Italy, where he made his first abstract constructed works at the British School at Rome. On returning to England, Carter was engaged as an assistant to the sculptor Bryan Kneale and worked towards his first solo exhibition at Redfern Gallery, London in 1968. After winning two Arts Council Awards, a retrospective exhibition of his work was held at the Warwick Arts Trust, London in 1983. Later, Carter participated in the international show Die Ecke at Galerie Hoffmann, Friedberg, Germany, where he made his first contact with European concrete and constructive artists. He has since exhibited widely in Europe, Japan and the USA. John Carter held a teaching position at the Chelsea College of Art and Design until his retirement from the post in 1999. He now lives and works in London, where a solo exhibition of his work was held at the Royal Academy in 2013. Jerwood Gallery opened to the public on 17 March 2012 as a not for profit organisation but became a charity in February 2017 and a National Portfolio Organisation of the Arts Council England in 2018. The gallery welcomes over 55,000 visitors each year. The Gallery is subsidised so local residents can enjoy half price entry, just £4, and up to 4 children go free with one paying adult. Every first Tuesday of the month the Gallery is also free to all from 4pm-8pm. Previous exhibitions have showcased artists including Rose Wylie, Gary Hume, Gillian Ayres, Jeffery Camp, Basil Beattie, Ansel Krut, Jake &amp; Dinos Chapman, Chantal Joffe, Ibrahim el Salahi, Sir Quentin Blake, Rachel Howard, Marcus Harvey, Keith Tyson, Dame Paula Rego, Gus Cummins and Mark Wallinger. Jerwood Gallery was awarded a Sussex Heritage Trust Public and Community Award and a Civic Trust Award in 2012 and in 2013 was awarded a National RIBA Award and reached the mid-list for the Stirling Prize for the Building of the Year. In 2014, it was awarded the RICS SE Regional Award for Regeneration. IMAGES Diagonals of a Square, John Carter, 1974, oil on plywood, 53.4 x 57.7 x 33cm © the artist and Redfern Gallery, London Squares, John Carter, 1970, acrylic on board, 220.2 x 274cm© the artist and Redfern Gallery, London John Carter in his studio, 2016 ©Peter Abrahams HIGH RESOLUTION IMAGES FOR MEDIA USE CAN BE DOWNLOADED HERE 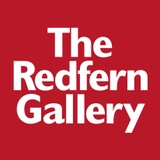 More from The Redfern Gallery Ltd