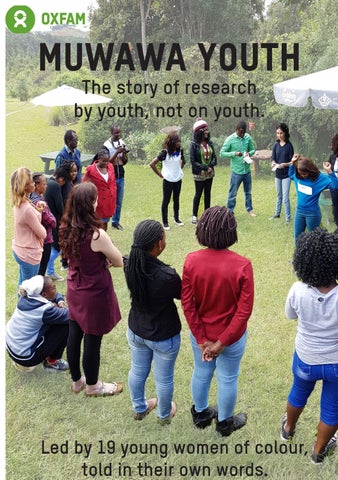 muwawa youth The story of research by youth, not on youth.

Led by 19 young women of colour, told in their own words.

The ‘power map’ of young women showed outside actors ‘cutting’ off their agency, including marriage counsellors and NGOs.

The ‘blesser phenomenon’ started on social media - with women showing off their ‘#blessed’ expensive life on Instagram, leading to questions about who their ‘blesser’ was. So the researchers used social media as well as their workshops, asking women (and men) how they saw transactional sex and relationships - and whether it was a choice.

Sex workers reported that they gained leadership experience and could find ways to be empowered. In one example, after violence was ignored by the police they went back with a group to demand to be taken seriously.

not for me, but now it is. It’s our turn.” - Poetry exercise on political participation.

Contradicting the researchers’ original assumption - the young women did not just associate politics with political parties. They knew about other methods of participation (petitions, debates, local politics) and exercised them in different ways. But they do not have faith that they can influence decisions that affect their lives. Women who had experienced violence had seen how the justice system either did not prosecute (with police often complicit), or did not protect (one women had her rapist return to their school after three months), and reported turning to mob justice.

Some of Our LESSONS “Before Luwawa I wasn’t confident, even with my friends. But after having that space, and then going into the field myself, I could talk about what happened with me. *They* think they’re giving us space, but they’re not” There was repeated frustration that ‘elders’ think they can explain youth issues without youth, and would not allow youth to question for themselves and bring up new evidence.

We saw journeys like this happen with everyone. Taking part in this process had personal impact on the researchers, on their participants, and we believe eventually will for their communities also.

“You have to be in our shoes, not talking on our behalf.

The youth researchers created a set of principles for the space they wanted to work in:

The original overall research question was on how young women ‘register dissent’. The researchers responded by focusing heavily on the economic or social barriers before women could even get to conventional politics. But the findings were not just about oppression, they actually discovered many small acts of resistance, and found inter-generational differences

“We’re don’t want to just kushingirira [perservere] into and through marriage like our mothers. We’re starting to ask: ‘why?’”

Even with a commitment to “We started that exercise talking people-powered change, it is so easy to lock young like NGO programmes-people, people out. The process of and then started talking like... Participatory Action people” Research changed staff and culture internally too. The researchers and their participants came up with practical and relevant “Access to economic ideas for starting to respond to the and financial issues they identified. Messenging apps are everywhere in the region, and information should be as easy for everyone as this idea also reflected the higher standards that young downloading women were expecting. Why should whatsapp” their phones work better than their job markets, or their governments?

The creation of this booklet - and all the research it features - was led by these researchers, with support from the Oxfam in Southern Africa youth working group, Recrear International, and Sho Konno 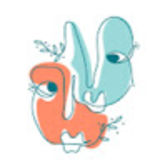 Muwawa Youth: Research by Youth not on Youth

Muwawa Youth: Research by Youth not on Youth