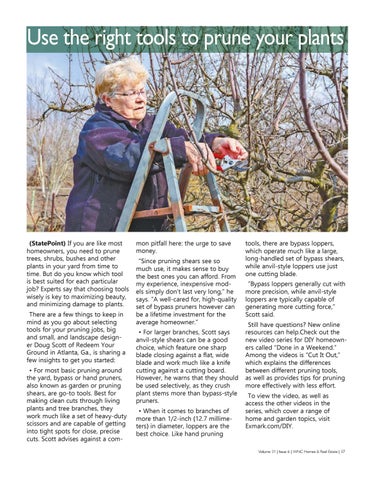 Use the right tools to prune your plants

(StatePoint) If you are like most homeowners, you need to prune trees, shrubs, bushes and other plants in your yard from time to time. But do you know which tool is best suited for each particular job? Experts say that choosing tools wisely is key to maximizing beauty, and minimizing damage to plants. There are a few things to keep in mind as you go about selecting tools for your pruning jobs, big and small, and landscape designer Doug Scott of Redeem Your Ground in Atlanta, Ga., is sharing a few insights to get you started: • For most basic pruning around the yard, bypass or hand pruners, also known as garden or pruning shears, are go-to tools. Best for making clean cuts through living plants and tree branches, they work much like a set of heavy-duty scissors and are capable of getting into tight spots for close, precise cuts. Scott advises against a com-

mon pitfall here: the urge to save money. “Since pruning shears see so much use, it makes sense to buy the best ones you can afford. From my experience, inexpensive models simply don’t last very long,” he says. “A well-cared for, high-quality set of bypass pruners however can be a lifetime investment for the average homeowner.” • For larger branches, Scott says anvil-style shears can be a good choice, which feature one sharp blade closing against a flat, wide blade and work much like a knife cutting against a cutting board. However, he warns that they should be used selectively, as they crush plant stems more than bypass-style pruners. • When it comes to branches of more than 1/2-inch (12.7 millimeters) in diameter, loppers are the best choice. Like hand pruning

tools, there are bypass loppers, which operate much like a large, long-handled set of bypass shears, while anvil-style loppers use just one cutting blade. “Bypass loppers generally cut with more precision, while anvil-style loppers are typically capable of generating more cutting force,” Scott said. Still have questions? New online resources can help.Check out the new video series for DIY homeowners called “Done in a Weekend.” Among the videos is “Cut It Out,” which explains the differences between different pruning tools, as well as provides tips for pruning more effectively with less effort. To view the video, as well as access the other videos in the series, which cover a range of home and garden topics, visit Exmark.com/DIY. 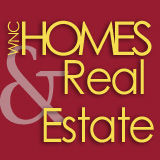