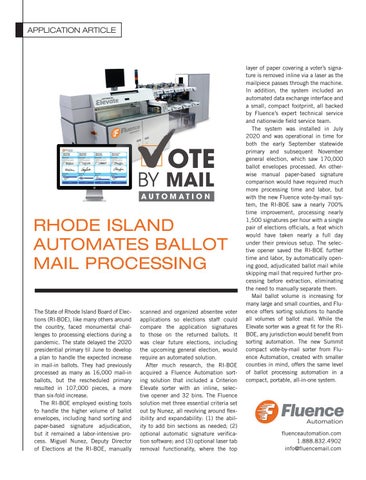 RHODE ISLAND AUTOMATES BALLOT MAIL PROCESSING The State of Rhode Island Board of Elections (RI-BOE), like many others around the country, faced monumental challenges to processing elections during a pandemic. The state delayed the 2020 presidential primary til June to develop a plan to handle the expected increase in mail-in ballots. They had previously processed as many as 16,000 mail-in ballots, but the rescheduled primary resulted in 107,000 pieces, a more than six-fold increase. The RI-BOE employed existing tools to handle the higher volume of ballot envelopes, including hand sorting and paper-based signature adjudication, but it remained a labor-intensive process. Miguel Nunez, Deputy Director of Elections at the RI-BOE, manually

scanned and organized absentee voter applications so elections staff could compare the application signatures to those on the returned ballots. It was clear future elections, including the upcoming general election, would require an automated solution. After much research, the RI-BOE acquired a Fluence Automation sorting solution that included a Criterion Elevate sorter with an inline, selective opener and 32 bins. The Fluence solution met three essential criteria set out by Nunez, all revolving around flexibility and expandability: (1) the ability to add bin sections as needed; (2) optional automatic signature verification software; and (3) optional laser tab removal functionality, where the top

layer of paper covering a voter’s signature is removed inline via a laser as the mailpiece passes through the machine. In addition, the system included an automated data exchange interface and a small, compact footprint, all backed by Fluence’s expert technical service and nationwide field service team. The system was installed in July 2020 and was operational in time for both the early September statewide primary and subsequent November general election, which saw 170,000 ballot envelopes processed. An otherwise manual paper-based signature comparison would have required much more processing time and labor, but with the new Fluence vote-by-mail system, the RI-BOE saw a nearly 700% time improvement, processing nearly 1,500 signatures per hour with a single pair of elections officials, a feat which would have taken nearly a full day under their previous setup. The selective opener saved the RI-BOE further time and labor, by automatically opening good, adjudicated ballot mail while skipping mail that required further processing before extraction, eliminating the need to manually separate them. Mail ballot volume is increasing for many large and small counties, and Fluence offers sorting solutions to handle all volumes of ballot mail. While the Elevate sorter was a great fit for the RIBOE, any jurisdiction would benefit from sorting automation. The new Summit compact vote-by-mail sorter from Fluence Automation, created with smaller counties in mind, offers the same level of ballot processing automation in a compact, portable, all-in-one system.