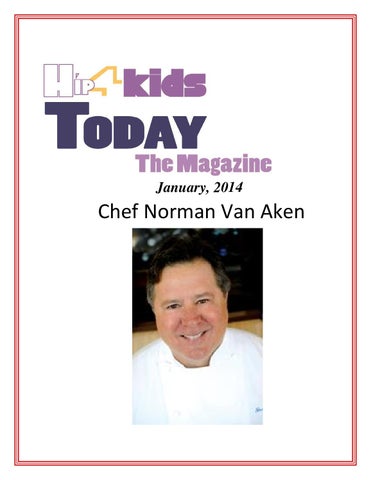 HIP4Kids Chef Norman Van Aken - a radio interview: What are your thoughts on the recent food trends taking over America? Chef: “America has almost always been on two tracks when it comes to trends; the commercial and the artistic or artisinal. Increasingly I think people are seeing the relationship between health (or poor health!) tied to the overly commercial. A gaining portion of the population is leaning towards organic and locally grown. But the job is still very much to be done. —- You never know!” Norman Van Aken is known as the founding father of New World Cuisine and introduced “Fusion” into the lexicon of modern cookery. www.NormanVanAken.com

Chef Christopher Daly The cold weather reminds me of a Robert Finale painting. The streetlights and fog; very still and wintry; very quiet indeed. For a city that supposedly never sleeps, it is doing a fine â&#x20AC;&#x153;impressionâ&#x20AC;?. It takes me back to a memory of when I first started working in restaurants and celebrating a New Year in 1978.

The walk home was filled with night & fog and the glow of Christmas lights and an occasional street lamp. I was a prep cook, a dishwasher or a busboy, depending on the day at the tiny little Seafood Pub owned by Bob Forshey and his wife Mary. It was the top of the top of fresh seafood restaurants in our area. There was no Twitter, Facebook or email, but it seemed like there was always lots of dishes to wash and vegetables to clean. These were the things that kept us busy. My view on seafood would later be radically changed, and thankfully much improved in the coming years after meeting chefs such as Gilbert LeCoze, Eberhard Mueller and Hans Rockenwagner.

I would never forgive myself if I didnâ&#x20AC;&#x2122;t mention Jeremiah Towers, Norman Van Aken, Alice Waters, and Michael McCarty, and how their books forever changed my outlook on cooking. The pictures in the classic releases were not only worth a thousand words, the recipes with local ingredients and regional attention changed everything for me and most of the chefs I have known forever. Most readers probably will not recognize these names, but these are just a few of the chefs who changed the face of American Cooking and sped us all on a path of education that continues to change America today. This was a great time for education for the American cook, chef and diner and a great time when American cooks could now begin to think of rivaling the European kitchens that

had brought the world the Michelin experience. Several years later I would be fortunate enough to gain entry into the debut Michelin Guide for New York City; one of the proudest accomplishments of my cooking career. Fast forward to 2014 and here I am with the honor to continue a tradition at Hip4Kids to publish, write and educate, this time as in the past fourteen for kids across New York City and across the country. The simple plan is to retrofit Hip4Kids Today, The Magazine with some new tools for teachers so they might replicate Hip4Kids after school program for ESL and CFES students. Hip4Kids also plans to publish The Hip4Kids Cookbook which has been a long term goal

and will ask all chef readers to consider joining the effort (we are just a phone call away). If that doesnâ&#x20AC;&#x2122;t work there is always Twitter, Facebook and email. Happy 2014 from Hip4Kids!

An Issue Possibly Much Bigger Than Unhealthy Foodâ&#x20AC;Ś By Bob Bickell

A recent study in the Journal of the American Medical Association would appear to be good news - More than 42 percent of U.S. adults smoked in years preceding the report; that rate has dropped to about 18 percent. It is hardly time to celebrate. The Centers for Disease Control and Prevention says about 443,000 Americans still die prematurely each year from smokingrelated causes. Smoking remains a stubborn problem, and heart disease, cancer, lung ailments, and stroke - all often linked with smoking - are the nation's four leading causes of death.

At some point in time, kids grow to become adults and jobs become a very big issue. We now see companies avoiding people who smoke due to insurance related problems. Of course, health is our issue, and in my opinion, smoking is every bit as harmful as obesity, if not more so. And take some time to do the math. Cigarettes are extremely expensive. Think in terms of maybe $5.00 per pack over 30, 40, or even 50 years. It’s a frightening thought. The Bottom line… Eat Healthy; Exercise; and DON’T SMOKE! End of Story.

Here is the most fattening foods listâ&#x20AC;Ś According to New Zealand researchers, these 49 foods and beverages are mainstays in the diets of people who are most frequently overweight or obese.

I always advocate for a non-diet approach to losing weight because fad or strict diets never work in the long-term. There are obvious behaviors like limiting screen time, eating out very infrequently, and limiting alcohol, never skipping meals, eating lots of produce and weighing yourself frequently. But now there are studies that show which foods make it harder to manage your weight. In one study, New Zealand researchers identified 49 foods considered the most damaging for your diet. In another study, University of Pittsburgh obesity researchers found several foods that were linked with weight loss at six months and two years later. The Pitt studyâ&#x20AC;&#x2122;s worst diet wreckers: desserts, fried foods and sweetened beverages. Below are the foods the New Zealand Researcher says are most linked to being overweight. If you eat or drink these, cut back as much as you can.

I have discovered a healthy way of living through exercise and healthy food. My choice is what is known as raw alkaline fitness foods, and I feel younger and healthier than I did so many years ago. My way of living is to avoid foods that are high in sugar, flour, and fat. Itâ&#x20AC;&#x2122;s that simple. Losing weight is not my purpose, but it stands to reason that over-weight ceases to be a consideration if you eat healthy food (fruits, vegetables, grains, and nuts and seeds). Exercise is vitally important, and simply has to be a big part of your life. I am not suggesting that you do exactly what I do, but I am suggesting that you eat healthy foods, and you exercise on an everyday basis. Make Good Things Happen! â&#x20AC;ŚChef Sal

“Set a goal so BIG that you can't achieve it until YOU grow into the person who can”. Joel Harper says “Exercise is Hip4Kids!

For over fourteen years Hip4Kids has been delivering Healthy Cooking Demos, Health Fairs and Educational Programming to children across the country in an effort to combat Childhood Obesity and Type II Diabetes.

With our separate after-school formats and free online curriculum, we have delivered educational services to a more than 200,000 children, parents and teachers. Hip4Kids is recognized by The Internal Revenue Service as a 501 c (3) Educational Company and is recognized by The New York State Attorney General as A Charitable Organization Your tax-deductible gift is applied directly to employing our student teachers and conducting our Healthy Living & Healthy Cooking Workshops and programs for underserved populations everywhere such as our current Middle School Programming for New York City Public Schools. With your tax-deductible gift you too can be Hip4Kids! Help Us Make a Difference in Education Today. Hit www.Hip4Kids.org …… “Ways to Help”

It’s time to take a “HIP “Quiz... 10 Questions 1. Johnny's mother had three children. The first child was named April. The second child was named May. ...What was the third child's name? 2. There is a clerk at the butcher shop, is five feet ten inches tall and he wears size 13 sneakers ....What does he weigh? 3. Before Mt. Everest was discovered, ...what was the highest mountain in the world? 4. How much dirt is there in a hole...that measures two feet by three feet by four feet? 5. What word in the English language...is always spelled incorrectly?

Johnny’s mother had three children. The first child was named April. The second child was named May. What was the third child’s name? Answer: Johnny of course The clerk at the butcher shop, 5 feet 10 inches tall, and he wears size 13 sneakers. What does he weigh? Answer – Meat! Before Mt. Everest was discovered, what was the highest mountain in the world? Answer: Mt. Everest; it just wasn't discovered yet. How much dirt is there in a hole that measures two feet by three feet by four feet? Answer: There is no dirt in a hole. What word in the English language is always spelled incorrectly? Answer: Incorrectly Billy was born on December 28th, yet his birthday is always in the summer. How is this possible? Answer: Billy lives in the Southern Hemisphere. In California, you cannot take a picture of a man with a wooden leg. Why not? Answer: You can't take pictures with a wooden leg. You need a camera to take pictures.

A Final Thought…2014 has arrived and it’s going to be a great year. Here is some advice to make you feel even better! “All negativity is caused by an accumulation of psychological time and denial of the present. Unease, anxiety, tension, stress, worry - all forms of fear - are caused by too much future, and not enough presence. Guilt, regret, resentment, grievances, sadness, bitterness, and all forms of non-forgiveness are caused by too much past and not enough presence.” Happy New Year! www.Hip4Kids.org Healthy food; healthy living for the Children of the World.

Healthy food; healthy living for the Children of the World.