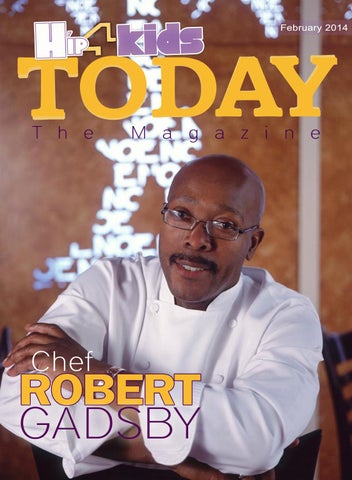 The great chef from the United Kingdom has trained under so many of the world’s finest chefs such as Italy’s renowned Gualtiero Marchesi, and some of the French legend’s such as Alain Chapel, Joel Robuchon, and Alain Ducasse. He also worked with great American chefs including Barry Wine, Tom Colicchio, and Thomas Keller.

Chef Gadsby has appeared on numerous television shows including Food Network, “Iron Chef”; The Travel Channel’s Andrew Zimmer “Bizarre Foods”, PBS, “Great Chefs of America.” He opened the original GADSBYS in 1994, which became a true expression of his culinary and business talent. Larry Lipson of the L. A. Daily News called GADSBYS “one of the most aesthetically expressive small dining rooms he ever encountered in Los Angeles. His current project is Gadsby’s Bar American in Ellicott City in Maryland.

Quotation – February “Never cut a tree down in the wintertime. Never make a negative decision in the low time. Never make your most important decisions when you are in your worst moods. Wait. Be patient. The storm will pass. The Spring will come.” …Robert Schuller

Chef Christopher Daly A very fine snow is falling here in New York City and the effect is comforting to me as another blanket of snow covers the roof tops and even makes alleys look pretty for a while. Of course, many local business people are probably not as enthusiastic, as it has been a very difficult winter.

When it snows in NYC, there are a couple (or more) ways to look at it… and while it might be a hindrance to business, it can be a beautiful respite that “humanizes” the city landscape. Having grown up where snow was very commonplace and plentiful, you were taught to “read” an approaching snow field by looking at the size of the crystals to determine the length of the storm and how much snow would fall. It was something that was a common knowledge lesson from farmers I knew, and it was very important in order to plan ahead. The snow was not something that really bothered us as we took it in stride and knew it had a vital purpose, especially with regards to the water table that would benefit what

everyone would soon be planting. The effect on the trout streams and the benefit to the trees was important for anyone interested in tapping for syrup. On the other side of the country, you might know that California just enjoyed their first significant storm in 14 months. There was impressive amounts of rain and snow, and as dramatic as it was, it would take many more such storms to end Californiaâ&#x20AC;&#x2122;s drought worries. Eighty percent of the State is in a severe drought condition, which is not very good news for chefs or people who enjoy good food. California supplies over fifty-percent of the vegetables for the entire country. I cooked in Los Angeles for a number of years with Thomas Keller, Raymond Hoffmeister, and Francois Metteigmer. We were always

cautious about our water use as the Los Angeles area is basically a desert. This past Friday I met downtown with a group of chefs that seemed to be unaware of what was happening in California and where the market was heading. They didn’t seem to care which surprised me, but there are many types of chefs in the cooking universe and not every chef is really that tuned-in to extreme quality, and what stewardship means for our craft. It’s hard to believe, but the very same ideas for conservation that were making headway in the late 60’s and 70’s just now seem to be catching on in the major consciousness of the country. It looks like it will be a tough year for produce and vegetables, and now more than ever is the

time for everyone to think about conservation on multiple levels. What was that Bob Dylan line about â&#x20AC;&#x153;knowing which way the wind is blowingâ&#x20AC;?? My advice is to ask a farmer, and start thinking and planning ahead.

“Giving up smoking is the easiest thing in the world. I know because I've done it thousands of times”…Mark Twain …By Bob Bickell

In one of the most interesting announcements in the history of big business, the folks at CVS decided it was time to rid itself of tobacco products in all of their stores. Because the Company understands the conflict of selling cigarettes and being in the health business, they are willing to give-up a profit of some $120 million dollars on an annual basis. One could suggest that itâ&#x20AC;&#x2122;s no big deal, because their competitors (such as Walgreens and Rite Aid) will gladly accept the added cigarette business. CVS is well aware of this, and it makes their decision all the more amazing. We tend to criticize big business for all the harmful things they seem to do, but in this case, walking away from a dramatic loss in sales has to be commended. I now officially see myself as a devoted customer of CVS, and I intend to go out of my way to support them in any way possible.

Eric Lawson was only one of the rugged Marlboro Men. He started smoking at the age of 14 and stayed hooked on cigarettes until his recent death. On January 10th, 2014, he died of respiratory failure due to chronic obstructive pulmonary disease, or COPD, which is an extremely uncomfortable way to go. Much to his credit, he realized his mistake (known as smoking) and he actually appeared in an anti-smoking commercial.

Other Marlboro men also died. David Millar, died of emphysema in 1987, and David McLean died of lung cancer in 1995. What more do you want to know? Just read the warning label on each pack of cigarettes. Eric knew the dangers, but he just couldnâ&#x20AC;&#x2122;t stop!

I live in Naples, Florida, one of the most beautiful spots in the world. I am happy, and Iâ&#x20AC;&#x2122;m healthier than ever. Itâ&#x20AC;&#x2122;s all about exercise and eating healthy foods. Life is good. I wanted to tell you that my life was not always good, and I have had major setbacks that are almost too tragic to talk about. My family is of Jewish descent and when I was very young and living in Amsterdam, my parents were rounded up and taken by train to a Nazi concentration camp, and later sent to Dachau where they were annihilated. My grandfather saved my life by hiding me on a nearby farm with a Christian family. I spent years living in a barn on their property, and at the end of the war, I was placed in an orphanage for several years. It was a very difficult beginning to say the least. At age 17, I

started to work in local restaurants and it led me to where I am today. I could go on and on about the sad parts of my journey, but I choose to concentrate on the positive things. Sometimes life is unbelievably challenging, and even depressing. But if you hang in there and simply refuse to give in to the bad times, things will get better. You just canâ&#x20AC;&#x2122;t give-up. I found the strength to keep on going, and in my mind, there is no other way. You just keep on keeping on.

Julie has some important advice to get healthy and to stay healthyâ&#x20AC;Ś

Start your meal with a soup! Dr. Barbara Rolls, Professor of Nutritional Sciences at Penn State University has been a pioneer in studying the role of “high water volume” foods on fullness and weight loss. One of her key findings: broth-based soups can contribute to a feeling of fullness. Broth-based soups like miso or chicken noodle are most effective while heavy, cream-based soups such as New England clam chowder defeat the purpose. And keep in mind that soup isn’t only a cold-weather food. In the summer, try chilled gazpacho or cucumber soup. Broth-based soups are the perfect appetizer and can keep you from overindulging in the main course and dessert.

Use a tall, skinny glass instead of a short, wide tumbler to cut liquid calories — and your weight — without dieting. You’ll drink 25% to 30% less juice, soda, or any other beverage. How can this work you say? Brian Wansink, PhD of Cornell University has found that visual cues can trick us into consuming more or less. His research reveals that most people pour more into a short, wide glass. It’s that simple!

Fruits & Veggiesâ&#x20AC;Ś probably one of the best lose-weight weapons in your arsenal. High in fiber and water, theyâ&#x20AC;&#x2122;ll fill you up without blowing your calorie budget. Aim for nine or more servings of fruits and vegetables every day. You can incorporate them into your diet in many ways: bulk up recipes or simply include more servings of whole fruits and vegetables at meals or snacks. www.appforhealth.com

Joel Harper is a celebrity trainer with clients ranging from Dr.

A head full of fears has no Space for Dreams! Olympic

For over fourteen years Hip4Kids has been delivering Healthy Cooking Demos, Health Fairs and Educational Programming to children across the country in an effort to combat Childhood Obesity and Type II Diabetes.

With our separate after-school formats and free online curriculum, we have delivered educational services to a more than 200,000 children, parents and teachers. Hip4Kids is recognized by The Internal Revenue Service as a 501 c (3) Educational Company and is recognized by The New York State Attorney General as A Charitable Organization Your tax-deductible gift is applied directly to employing our student teachers and conducting our Healthy Living & Healthy Cooking Workshops and programs for underserved populations everywhere such as our current Middle School Programming for New York City Public Schools. With your tax-deductible gift you too can be Hip4Kids! Help Us Make a Difference in Education Today. Hit www.Hip4Kids.org …… “Ways to Help” Healthy Foods and Exercise for Kids.

Healthy Foods and Exercise for Kids.