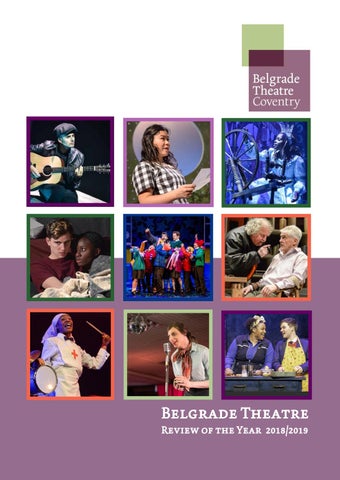 CHAIRMAN’S LETTER It has been an ambitious and successful year for the Theatre. Work has started on developing a major project that will be delivered in partnership with City of Culture Trust for 2021. These are exciting times and it’s rewarding to see that the work that the Theatre has been doing in recent years in diversifying its programme, audiences and the way it works, will all be coming together.

work both in the Theatre’s auditoria and in the community. There have been many memorable productions, but taking over the Coventry Evening Telegraph Building to deliver a large-scale participation piece – City Final, has to be my highlight. Such ambition drawing so many members of the community together; this showed what we’re capable of achieving with the right resources in place.

Plans to deliver our 2020 Capital Redevelopment Project have also proved fruitful. It’s so important to make sure that we have a building and resources ready to give visitors to Coventry in 2021 the positive lasting impressions we want them to leave with. It will take some time, and see us covered in scaffolding and slightly adjusting how we operate, but I promise the results will be worthwhile. Thank you to everyone who has supported us in raising the initial funds to help make this all possible.

There is so much more that I could mention, like the on-going work to become a greener theatre, the hub for talent development, including Springboard companies, all the work done to welcome people with access needs, plus our commercial work making us more self-sufficient, but it’s the people behind the scenes that help drive all of this forward that I really do need to mention. Thank you to everyone who helps keep this Theatre such a vibrant place to work and visit, especially its hard working team of staff.

Birmingham Mail on Nativity the Musical

Together, with the diverse communities across Coventry and the region, we aim to enrich and fundamentally change people’s lives for the better through theatre. FROM OUR ARTISTIC DIRECTOR &amp; CHIEF EXECUTIVE It has been another productive year in which we’ve presented 127 different productions enabling the Theatre to serve and develop a wide range of audiences. We produced or co-produced eight professional shows (six of which toured), including four premieres, plus four Community productions including the large scale site specific Coventry Evening Telegraph show - City Final. On our B2 stage we told local stories with We’ll Live and Die in These Towns by Geoff Thompson with music by The Enemy’s Tom Clarke, we presented our first East Asian story Under the Umbrella by Amy Ng, receiving much positive media coverage, and Octopus Soup! by Jack Milner &amp; Mark Stevenson added some light-hearted comedy to the season. The humour continued in our alternative Christmas show – Over the Top by Nick Walker. Shows for families and young people included Noughts &amp; Crosses by Malorie Blackman co-produced with Pilot Theatre also in B2 and on our Main Stage Billionaire Boy by David Walliams, co-produced with Nuffield Southampton Theatres and Nativity! coproduced with Birmingham Rep Theatre. Plus our pantomime this year was Sleeping Beauty by Iain Lauchlan in association with Imagine Theatre, which smashed all previous box office records. We continue to extend our reach to under-represented communities.

This work has included a supper, Tranz Talkz, and The Twisted Tale of Hansel &amp; Gretel created by Open Theatre and integrating learning disabled actors. We welcomed several new Springboard Companies; Maokwo who work with migrant artists, Underground Lights who work with homeless people and people with mental health issues, and Richard &amp; Rishard a diverse-led and integrated learning disabled theatre partnership. They join existing Springboard members Shoot and New English Opera. We also supported local diverse-led dance company Ascension Dance and worked In-Association with Springboard-graduated, black-led company Strictly Arts to present Freeman which toured Internationally, and with Second Generation to present Save Our School Dinners …. Jamie. All of this work puts us steadily on the path to 2021 for our year of City of Culture. Thank you all for joining us on this journey and your continued support. Hamish Glen Artistic Director &amp; Chief Executive

“a truly uplifting show, with an electric score, and its roots firmly in the earth of its origins. A treat for fan and newcomer alike” Musical Theatre Review.com on We ‘ll Live And Die In These Towns

We’ll Live and Die in These Towns

In our landmark building, across the region, the UK and online, we will use theatre to entertain, inspire, share the city’s stories, uncover hidden histories and unleash the creativity in our communities. FROM OUR EXECUTIVE DIRECTOR

Our overall turnover has increased by 7% to £6.2m including earned/ raised, £182k specifically to support our Community, Education and Talent Development programmes by enabling additional projects. Throughout the year we have delivered 466 performances of 127 different productions and attracted audiences of 210,171 to shows, events and conferences (175,171 to shows alone). The Theatre’s trading subsidiary Belgrade Theatre Enterprises grew to £1.6m representing 26% of turnover. Several strands now make major contributions – our

commercial set building arm Belgrade Production Services (BPS), Catering, and Events and Conferencing. Commercial work in community and education continues to increase our impact in this area as well as making a financial contribution to our charitable objectives. Our £5m 2020 redevelopment programme centres on expanding the Theatre’s footprint and the refurbishment of the Main Stage auditorium to ensure the Theatre is City of Culture 2021 ready. Works are taking place during the summers of 2019 and 2020, minimising the closure period, and to be complete for City of Culture 2021. These are times of economic uncertainty, but with good levels of reserves in place and a strong and dedicated team of staff, we are confident that the future is bright.

I’m delighted to report that this year we have continued to improve on our Earned vs Grant ratio and are now proudly 75.5% Earned (up from 46.4% in 2008/09) proving that the Belgrade’s business model continues to prove itself to be flexible and robust and ensures that we can continue to offer a high quality programme of work for the city and region despite pressure on public funding resources.

of theatre I have seen this year and a masterpiece of succinct storytelling” LondonTheatre.com on Under The Umbrella

FROM CLICK SPRING We continue to deliver a broad reaching open-access workshop programme, reaching some of the hardest-to-reach groups. In 2018/19 we ran 12 regular youth workshop programmes and five regular programmes for adults (including a 50+ programme / work with those with early onset dementia). Our schools programme continues to support the place of drama in schools, including 11 Career Development Events. Our Talent Development programme, focusing on underrepresentation in the sector, was boosted by Sustained Consortium funds – as well as supporting an 18 month placement for a Producer of East Asian heritage, we offered four Assistant Director roles, two directing opportunities for emerging youth talent, one Disabled Artist Residency and opportunities for eight writers of colour (Critical Mass) &amp; 16 producers - four BAME, five disabled (China Plate’s The Optimists). We also offered two non-graduate apprenticeships, one Graduate Internship, 13 university placements and 12 week-long work experience placements.

In Autumn 2018, the Belgrade launched Click Spring, a rebrand of its work in the areas of participation, talent development &amp; new work, in recognition of the growth of its programme in these areas. This ethos instigated a refresh of the Belgrade brand to reflect the organisation’s commitment to increasingly embedding this work across its programme. This was reflected during the course of the year by the range of new productions to emerge in this area: City Final (a large-scale site-specific community production in the old Coventry Evening Telegraph Building involving over 100 diverse community participants of all ages, made possible by Great Places funding); Rise (our Young Company’s 2017 production celebrating the potential of a diverse group of young women, which performed at Birmingham’s By, With, For Festival of European Youth Theatre in Summer 2018); Room to Grow (our annual Theatre in Education piece about the transition from Primary to Secondary School); Under the Umbrella by Amy Ng (our first home-produced show with an East Asian narrative, which emerged from the Sustained Trainee Regional Producers programme); and end of term sharings including What We See In Darkness (National Maths &amp; Science College) and Blank (LifeStage).

“Quite the best piece

of participants from priority postcode areas

The Stage on City Final

What We See In The Darkness

The Belgrade Theatre acts as a Hub for local creatives. As part of this process we have established the Springboard initiative which supports early stage artists and companies to develop to the next chapter of their careers; offering performance and office space, mentoring, communications and fundraising support.

Our Year in Figures

“It’s an absolute must-see for theatre goers of any age who love upbeat, feel-good musicals” What’s On Stage on the award-winning Billionaire Boy the Musical

210,046 tickets for shows, events and conferences

Where our customers came from

Muddy Stilettos on Over The Top

The amount each £1 of CCC funding generated which rises to £9.55 with ACE funding. The amount of additional &amp; existing sources of commercial income earned, totalling £8.63m since 2007. 100%

The amount of income the theatre now earns.

Belgrade Production Services (BPS), our commercial set building arm, builds sets for Belgrade productions that are seen in other theatres as well as building sets for numerous other companies around the country.

BPS retains a pool of skilled workers in the city and in 2018/19 provided almost 21,680 hours of work for freelance/casual carpenters, welders, props makers, scenic artists and wardrobe technicians, in addition to the Belgrade’s core staffing.

Belgrade. It struck me that having been around the world several times I’ve never sat in a place with such an eclectic mix of people from all classes, abilities, races, sexualities, ages, cultures and backgrounds. Absolutely magical place”

“a gritty show that really leaves you thinking ” Sixty9Degrees on the award-winning Noughts &amp; Crosses

Theatre in Education was born at the Belgrade in 1965 and became a world-wide movement.

decrease in gas &amp; electricity use over the last 10 years.

plastic cups saved from landfill, by replacing plastic cups with biodegradable Vegware. “Belgrade plastics are not plastic” almost all have been replaced with biodegradable alternatives including straws, takeaway cutlery and salad bowls. We continue to re-use, repair, rethink, reduce, refuse and recycle. Further information on our Environmental Policy can be found at www.belgrade.co.uk/about-us/environmental-policy

Thank you to our supporters The Belgrade Theatre Trust is a registered charity (number 219163)* and relies on support we receive from generous individuals and organisations. Those who support our work enable us to continue to develop our artistic, community, educational and talent development work – so thank you.

raised in donations, grants and corporate support - enabling us to provide amazing opportunities, including;

work placement hours including apprenticeships of

In addition to our individual members and corporate supporters, the Belgrade Theatre gratefully acknowledges financial support from the following Trust and Foundations in 2018/19:017/2018;

*We are committed to being open, honest and transparent – adhering to the Fundraising Promise and

the independent regulator of charitable fundraising.

THE IMPACT OF PUBLIC INVESTMENT 2018-19 The Belgrade Theatre is a charity. Public funding received from Arts Council England, Coventry City Council, fundraising from various Trusts and Foundations, and Charitable and Business Sponsorship, enables us to leverage considerably more from earned income generated through ticket and other sales.

We worked with over

was paid in Tax and NI

artists from the UK’s talent pool in the creative industries

people experienced a live performance at the Belgrade Theatre

Spent on gross payroll, creating full or part time employment for over 275 people

Our average ticket price of £15.49 meant our tickets were affordable &amp; accessible

£7.29 GENERATED FOR EVERY £1 OF COVENTRY CITY COUNCIL FUNDING

worth of local economic impact 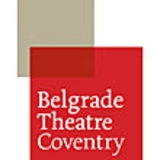