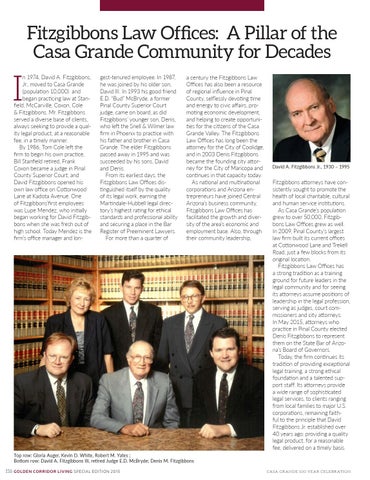 Fitzgibbons Law Offices: A Pillar of the Casa Grande Community for Decades

n 1974, David A. Fitzgibbons, Jr., moved to Casa Grande (population 10,000) and began practicing law at Stanfield, McCarville, Coxon, Cole & Fitzgibbons. Mr. Fitzgibbons served a diverse base of clients, always seeking to provide a quality legal product, at a reasonable fee, in a timely manner. By 1986, Tom Cole left the firm to begin his own practice, Bill Stanfield retired, Frank Coxon became a judge in Pinal County Superior Court, and David Fitzgibbons opened his own law office on Cottonwood Lane at Kadota Avenue. One of Fitzgibbons’first employees was Lupe Mendez, who initially began working for David Fitzgibbons when she was fresh out of high school. Today Mendez is the firm’s office manager and lon-

gest-tenured employee. In 1987, he was joined by his older son, David III. In 1993 his good friend E.D. “Bud” McBryde, a former Pinal County Superior Court judge, came on board, as did Fitzgibbons’ younger son, Denis, who left the Snell & Wilmer law firm in Phoenix to practice with his father and brother in Casa Grande. The elder Fitzgibbons passed away in 1995 and was succeeded by his sons, David and Denis. From its earliest days, the Fitzgibbons Law Offices distinguished itself by the quality of its legal work, earning the Martindale-Hubbell legal directory’s highest rating for ethical standards and professional ability and securing a place in the Bar Register of Preeminent Lawyers. For more than a quarter of

Fitzgibbons attorneys have consistently sought to promote the health of local charitable, cultural and human service institutions. As Casa Grande’s population grew to over 50,000, Fitzgibbons Law Offices grew as well. In 2009, Pinal County’s largest law firm built its current offices at Cottonwood Lane and Trekell Road, just a few blocks from its original location. Fitzgibbons Law Offices has a strong tradition as a training ground for future leaders in the legal community and for seeing its attorneys assume positions of leadership in the legal profession, serving as judges, court commissioners and city attorneys. In May 2015, attorneys who practice in Pinal County elected Denis Fitzgibbons to represent them on the State Bar of Arizona’s Board of Governors. Today, the firm continues its tradition of providing exceptional legal training, a strong ethical foundation and a talented support staff. Its attorneys provide a wide range of sophisticated legal services, to clients ranging from local families to major U.S. corporations, remaining faithful to the principle that David Fitzgibbons Jr. established over 40 years ago: providing a quality legal product, for a reasonable fee, delivered on a timely basis.