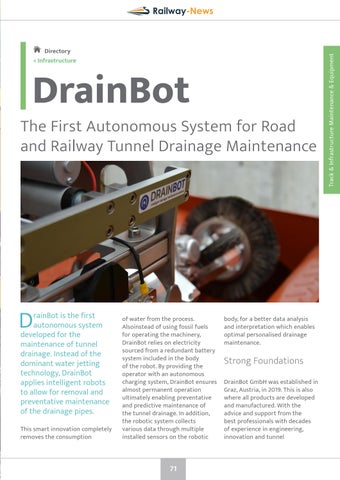 rainBot is the first autonomous system developed for the maintenance of tunnel drainage. Instead of the dominant water jetting technology, DrainBot applies intelligent robots to allow for removal and preventative maintenance of the drainage pipes. This smart innovation completely removes the consumption

of water from the process. Alsoinstead of using fossil fuels for operating the machinery, DrainBot relies on electricity sourced from a redundant battery system included in the body of the robot. By providing the operator with an autonomous charging system, DrainBot ensures almost permanent operation ultimately enabling preventative and predictive maintenance of the tunnel drainage. In addition, the robotic system collects various data through multiple installed sensors on the robotic

Strong Foundations DrainBot GmbH was established in Graz, Austria, in 2019. This is also where all products are developed and manufactured. With the advice and support from the best professionals with decades of experience in engineering, innovation and tunnel

The first issue of 2022 takes a look at recent news in the UK rail industry, from TfL's ongoing funding problems, to storms Eunice and Franklin wreaking havoc and positive developments such as Crossrail opening in the first half of the year. Aytek Yuksel from Cummins writes about the six trends that will be important for the rail industry moving forward, such as increasing urbanisation. In our Directory, broken down into the major categories Data & Information, Infrastructure, Rolling Stock and Services you can easily find the railway solutions you're interested in. From condition monitoring and predictive maintenance to worksite protection and crew management, we have you covered. 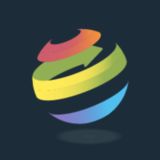