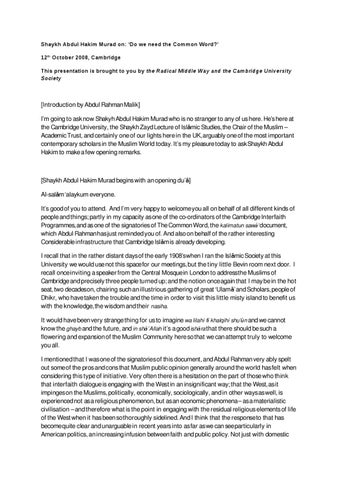 Shaykh Abdul Hakim Murad on: ‘Do we need the Common Word?’ 12th October 2008, Cambridge This presentation is brought to you by the Radical Middle Way and the Cambridge University Society

[Introduction by Abdul Rahman Malik] I’m going to ask now Shakyh Abdul Hakim Murad who is no stranger to any of us here. He’s here at the Cambridge University, the Shaykh Zayd Lecture of Islāmic Studies, the Chair of the Muslim – Academic Trust, and certainly one of our lights here in the UK, arguably one of the most important contemporary scholars in the Muslim World today. It’s my pleasure today to ask Shaykh Abdul Hakim to make a few opening remarks.

[Shaykh Abdul Hakim Murad begins with an opening du’ā] Al-salām ‘alaykum everyone. It’s good of you to attend. And I’m very happy to welcome you all on behalf of all different kinds of people and things; partly in my capacity as one of the co-ordinators of the Cambridge Interfaith Programmes, and as one of the signatories of The Common Word, the kalimatun sawā’ document, which Abdul Rahman has just reminded you of. And also on behalf of the rather interesting Considerable infrastructure that Cambridge Islām is already developing. I recall that in the rather distant days of the early 1908’s when I ran the Islāmic Society at this University we would use not this space for our meetings, but the tiny little Bevin room next door. I recall once inviting a speaker from the Central Mosque in London to addressthe Muslims of Cambridge and precisely three people turned up; and the notion once again that I may be in the hot seat, two decadeson, chairing such an illustrious gathering of great ‘Ulamā’ and Scholars, people of Dhikr, who have taken the trouble and the time in order to visit this little misty island to benefit us with the knowledge, the wisdom and their nasiha. It would have been very strange thing for us to imagine wa lilahi fī khalqihi shu’ūn and we cannot know the ghayb and the future, and in shā’ Allah it’s a good ishāra that there should be such a flowering and expansion of the Muslim Community here so that we can attempt truly to welcome you all. I mentioned that I was one of the signatories of this document, and Abdul Rahman very ably spelt out some of the pros and cons that Muslim public opinion generally around the world has felt when considering this type of initiative. Very often there is a hesitation on the part of those who think that interfaith dialogue is engaging with the West in an insignificant way; that the West, as it impinges on the Muslims, politically, economically, sociologically, and in other ways as well, is experienced not as a religious phenomenon, but as an economic phenomena – as a materialistic civilisation – and therefore what is the point in engaging with the residual religious elements of life of the West when it has been so thoroughly sidelined. And I think that the response to that has become quite clear and unarguable in recent years into as far as we can see particularly in American politics, an increasing infusion between faith and public policy. Not just with domestic

issues– such as the rights of minorities – and issuessuch as abortion and creationism in schools, but also in foreign policy issuespertaining to the Arab –Israeli dispute, Iraq, Afghanistan, and an increasing number of other flash points that bear immediately upon the concerns and vulnerabilities of Muslims. There is clearly a religious element that is flowing into their politics. And therefore it seemsto me, and this is really why I put my name to the document, that by attempting to bypassthose increasingly tired secular voices in the West, and engaging with the West in that area which many take to be what is at its heart and what is at its core, still, that is to say belief in God, if we engage not as a materialistic civilisation, but in so far that they can still be recognised as ‘Ahl Al-Kitāb’ then we will actually find some sort of common ground. It’s hard for us to engagewith them as a materialistic civilisation, becausethat’s not what we are as Muslims, or not what we aspire to be. Even materialists find it hard to deal with each other on the basis of principle; ‘How can Las Vegasspeak to Dubai?’ for instance. What kind of communication could we have if it was those aspects of our two civilisations that were to be at the forefront of the conversation? But faith does speak to faith. The Arch Bishop can speak to the Mufti. There are considerably, historic, deeply engrained differences of course, but there is also a common principle, which is so frequently indicated in the Qur’ān. And it does seem to me, as Muslims we are in a privileged position. It’s easy for us to speak to other Abrahamic believers than it is for them to speak to us. Becausewe have already hard-wired into the logic boards of our basic religious assumptions, the idea that at that point of origin, those religions were perfect, divine interventions that brought the principles of Tawhīd and human fellowship, into the troubled story of humanity. We may not agree with all the subsequent evolutions of their teachings, in fact, we frequently don’t. We may not agree with their current religiously motivated politics, but we can certainly deal with them as Ahl Al-Kitāb – people of Scriptures – and as people who follow some of the greatest Ul AlAdtham, the greatest, most determined, Messengers that Allah subhāna wa ta’ala has sent to His Creation. And the Jew and the Christian is not quite so able to do that, in terms of the triangle of the Abrahamic faiths, becauseone or perhaps two points of the triangle, will for them, be a bone of contention and perhaps one of the biggest sources of doubt and confusion for them in the way they view Allah subhāna wa ta’ala’s interaction with history. So I think for all of these reasons, and becauseof the increasing centrality of religion in world affairs and also becauseof our privileged and fortunate and blessed position as followers of the Khatim Al – Anbiyā’, ‘alayhi Al-salām, the seal of the Messengers, that we are being called at this time, to engagein the West on the basis of sacred principles, rather than on the basis of cynical trade-off considerations of mutual gains and co-existence. Allahu ‘alam. But as somebody who is very happy to be one of the helpers and servants of this morning’s event, I’m looking forward very much, as I’m sure you all are, the wisdom and the nasiha of our Shaykhs. Barik Allahu fīkum. Al-salām ‘alaykum wa Rahmat Allah.

It’s good of you to attend. And I’m very happy to welcome you all on behalf of all different kinds of people and things; partly in my capacity as one of the co-ordinators of the Cambridge Interfaith Programmes, and as one of the signatories of The Common Word, the kalimatun saw ’ ā document, which Abdul Rahman has just reminded you of. And also on behalf of the rather interesting Considerable infrastructure that Cambridge Isl m is already developing. ā 12 th October 2008, Cambridge ā 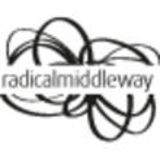