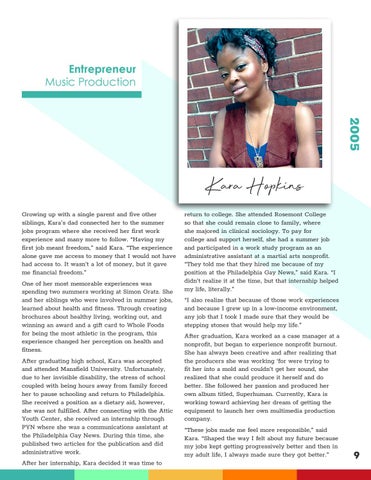 Kara Hopkins Growing up with a single parent and five other siblings, Kara’s dad connected her to the summer jobs program where she received her first work experience and many more to follow. “Having my first job meant freedom,” said Kara. “The experience alone gave me access to money that I would not have had access to. It wasn’t a lot of money, but it gave me financial freedom.” One of her most memorable experiences was spending two summers working at Simon Gratz. She and her siblings who were involved in summer jobs, learned about health and fitness. Through creating brochures about healthy living, working out, and winning an award and a gift card to Whole Foods for being the most athletic in the program, this experience changed her perception on health and fitness. After graduating high school, Kara was accepted and attended Mansfield University. Unfortunately, due to her invisible disability, the stress of school coupled with being hours away from family forced her to pause schooling and return to Philadelphia. She received a position as a dietary aid, however, she was not fulfilled. After connecting with the Attic Youth Center, she received an internship through PYN where she was a communications assistant at the Philadelphia Gay News. During this time, she published two articles for the publication and did administrative work. After her internship, Kara decided it was time to

return to college. She attended Rosemont College so that she could remain close to family, where she majored in clinical sociology. To pay for college and support herself, she had a summer job and participated in a work study program as an administrative assistant at a martial arts nonprofit. “They told me that they hired me because of my position at the Philadelphia Gay News,” said Kara. “I didn’t realize it at the time, but that internship helped my life, literally.” “I also realize that because of those work experiences and because I grew up in a low-income environment, any job that I took I made sure that they would be stepping stones that would help my life.” After graduation, Kara worked as a case manager at a nonprofit, but began to experience nonprofit burnout. She has always been creative and after realizing that the producers she was working ‘for were trying to fit her into a mold and couldn’t get her sound, she realized that she could produce it herself and do better. She followed her passion and produced her own album titled, Superhuman. Currently, Kara is working toward achieving her dream of getting the equipment to launch her own multimedia production company. “These jobs made me feel more responsible,” said Kara. “Shaped the way I felt about my future because my jobs kept getting progressively better and then in my adult life, I always made sure they got better.”